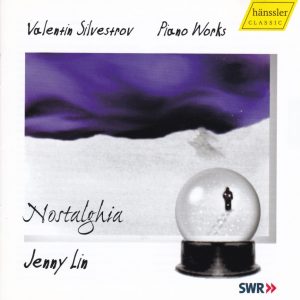 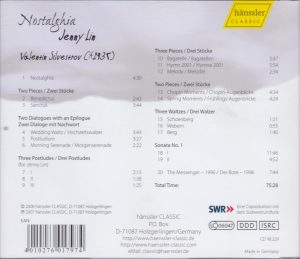 Well, it all depends. If your horizon in music is Elton John or Yann Tiersen of Amélie Poulain fame, you might find this disc appealing, or at least some of it. Or if you think the horizon of 21st century contemporary music should be Schubert and Mendelsssohn, this is also for you. That’s the style of music that Silvestrov is now composing, at least in the small piano pieces which he composed in what he himself has called, re the liner notes, his “bagatelle period”. If, like me, you listen to classical music precisely to escape from the contemporary muzak of the pop scene, if you think Elton John is NOT a greater composer than Ligeti or Crumb, and if you think that any contemporary composer is and must consider himself the heir to ALL his musical past rather than its negator, then you are likely, as I did, to find this disc not appealing, but appalling.

The Ukrainian Valentin Silvestrov, born in 1937, started off as a post-Webern radical (the atmosphere seems to have been slightly more permissive in Ukraine in the early 1960s than it was nearer the heart of the Empire in Russia), but, as many of his generation (Pärt, Gorecki), he soon grew dissatisfied with the avant-garde and moved away from it, to adopt a more mystical, meditative and slow-moving style. The trend set in as early as 1960, with his first piano sonata which he wrote in reaction against what he called “hammer music”, music that forces itself onto the listener’s attention, then put into a drawer, only to re-discover it later, revise and trim it even more. With its two companions Sonatas No. 2 (1975) and 3 (1979) and the Cello-Piano Sonata from 1983, it was recorded by Alexei Lubimov on Erato 2292-45631-2 (1992) (link will open new tab to my review). The first Sonata is also played here by Jenny Lin, with shorter and more recent pieces.

The Sonata is mostly hushed and subdued, the outbursts in the first movement are few and far between but, at the hands of Linn, they build to great intensity. The harmonic mood and melodic outlook are vaguely reminiscent of the bitter sweet atmospheres of late Prokofiev or Shostakovich , or Hindemith, at their most brooding and meditative (but without their unique melodic signature).

In the small pieces, composed between 1996 (The Messenger, track 20) and 2005 (Three Postludes, tracks 7-9, written for Jenny Lin), Silvestrov goes even a few steps further. The first three tracks, Nostalghia, Benedictus, Sanctus, as well as Hymn 2001, the second of the Three Pieces (track 11) are for the amateurs of Elton John and Yann Tiersen, slow-moving, nostalgic (sustaining pedal depressed for the resonances – of the past, no doubt – to unfold), harmonically and melodically simple, the kind of thing Elton and Yann might have improvised on their piano or used for a sentimental scene in Amélie Poulain.

The rest are Silvestrov’s “Dialogues with the Past” (“an important issue with Silvestrov for a long time” say the liner notes) – but it is not so much dialoguing as immersing oneself into it. Schnittke dialogued with the baroque past, Brahms, Mahler, Bartok and Stravinsky dialogued with Bach (and Stravinsky with Pergolesi), but Silvestrov here is only dreaming that two centuries of music and history never happened. Typical is Wedding Waltz, supposedly a waltz improvised by Schubert but never penned down by him, which was transmitted through oral tradition until “the descendents of Strauss” notated it in 1943, say the liner notes. What “descendents” of Strauss? In 1943, Strauss was still alive. This sounds like a hoax. Anyway, what Silvestrov did with that Waltz is unclear, but his treatment sounds not so much like Schubert as like a scrap from Mendelssohn that Felix would have deemed unworthy to be part of his Songs without words, and the third piece from that cycle, Morning Serenade, is not better. French pianist Richard Clayderman has specialized in bringing classical music to the masses in the watered down form of muzak, and this is exactly how Morning Serenade, as well as the Three Postludes or Melody, the third from the Three Pieces, track 12, sound – or, if you prefer, music that Wladyslaw Szpilman., the “Pianist” of Roman Polanski fame, would have improvised at his piano in the Varsaw café with nobody paying attention. At the end of the last Postlude, again Silvestrov plays his little trick of keeping the sustaining pedal depressed, to make you think something profound and mysterious is happening. Likewise, “Messenger”, the piece from 1996 dedicated to the memory of his wife and which rounds off the program (track 20), is an imitation of Mozart with depressed sustaining pedal. “Thus, aptly comment the liner notes, are beloved figures superimposed, as in a dream, sometimes losing their contours, but never fading from our memory”. Yes, this is a perfect definition of what Silvestrov is obviously aiming at with his Dialogues with the past – but depressed pedal doesn’t make them less trite pastiches. Postludium, the second piece from the Dialogues (track 5), is a dialogue with Wagner’s Albumblatt for piano – would Silvestrov, like Liszt, have chosen the Tristan Prelude instead (some intervals bring it to mind)! At the end of Postludium, for a few seconds, Silvestrov has the pianist play directly on the strings (a tremolo) – it seems arbitrary, but it comes as such a relief! But it is no figure of speech: a few seconds of relief. His trick in his dialogue with Chopin, track 13, seems to write an imitation Chopin but to lower it an octave or two. Well-done Valentin, brilliantly creative! The three dialogues with Schoenberg, Berg and Webern (and with Silvestrov’s own youth) are slightly more interesting and atmospheric, without breaking any grounds either, new or old.

I can understand and sympathize with the silent revolt against the strictures of Soviet communism that is arguably what led composers like Silvestrov, Gorecki, Schnittke, Ustvolskaya or Gubaidulina to reject the strictures of both serialism and of the official, “realist-socialist” music-for-the-proletariat canon. As this list of composer shows, it has produced great results. But now and here, Silvestrov seems to have gone the full way and rejected ALL strictures, not just those imposed from the outside but also any self-imposed, and adopted the attitude: “if I feel like writing music of Chopin and Schubert, or Elton John and Yann Tiersen, if it comes out of my soul, there’s nothing stopping me”. All music, all art even has always worked with strictures, rules, constraints: it is on the basis of these that creators create, through their dialogue with these rules and constraints, not through rejection of them. The great composers, the great writers, the great painters have always dialogued with the past – not to imitate it or pastiche it, but to transform it and make it their own. I haven’t been able to find the exact quote, but I think George Bernard Shaw said something to the effect that the process of creation had to do not so much with producing, as with throwing to the waste basket. There is something about the nature of creation that Silvestrov seems to have not understood.

Jenny Lin is a capable pianist and she’s proven her imagination and mettle in other recordings, and for whatever it’s worth, she plays the sonata with considerably more impact, if slightly less atmosphere, than Alexei Lubimov on Erato, thanks also to the more present and vivid sonics. But that she’s decided to champion this music makes me question her artistic judgment. TT 75 minutes, at least this is a CD that won’t encumber my shelves. His String Quartets (by the Lysenko String Quartet on Etcetera KTC 1150) are a better representation of Silvestrov.