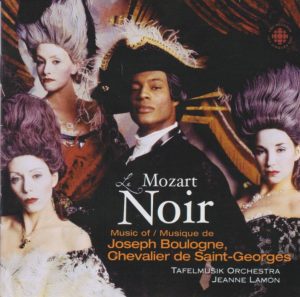 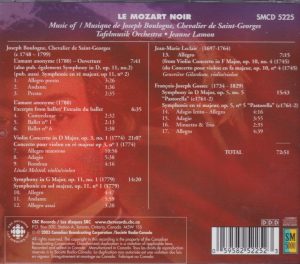 It must have been something with the reign of Louis the 15th
Originally posted on Amazon.com, 3 October 2011

The mulatto composer, Joseph Boulogne (or Bologne), aka Chevalier de Saint-George (often spellt Saint-Georges with a final s), was a student, or at least a protégé of François-Joseph Gossec (in 1769 he became head of the second violins in Gossec’s Concert des Amateurs, and he eventually succeeded Gossec as its conductor) and you can hear it. In fact, he may have been Gossec’s favorite student or protégé (Gossec dedicated his Trios opus 9 in 1766 to him, naming himself Saint-George’s “humble servant”; likewise, in 1770 the famous Mannheim composer Carl Stamitz dedicated his Six Orchestral Quartets Op.1 to Saint-George’s father, “To Monsieur Bologne de St-George, who brings to his good fortune as a lover of the arts the pleasure of also understanding them, and who has given us artists an invaluable gift in the person of his son”) and you can hear why.

I know, this sounds terribly pedantic – like: who’s familiar with the music of Gossec? That’s hardly a household name, and it’s not as if I were writing, “such and such was a student of Beethoven and you can hear it”.

But it happens that I’ve been listening to a lot of Gossec recently – I’ve long known his magnificent Requiem (see my review of Louis Devos’ recording on Erato), but a survey of the recordings of “minor” late 18th Century composers by Concerto Köln sent me on a listening cycle of as much of his symphonies as I could find on CD (see my reviews of the recordings of Matthias Bamert on Chandos, Concerto Köln on Capriccio, Stefan Sanderling vol 1. and vol. 2 on ASV, Guy Van Waas on Ricercar-Outhère in the Symphonies op. 8 and Symphonies op. 12, and see my Gossec composer page for even more), and many of the characteristic hallmarks of Gossec’s symphonic style I find also in those of Saint-George. Something I wrote in one of my reviews of Gossec’s symphonies applies to the music of Saint-George as well: “What I find immensely appealing in Gossec’s symphonies is that the composer manages to be smiling and sunny without being superficially galant, elegant and salon-like.” None of the drama, agitation, emotional turbulence and angles so characteristic of the “Sturm & Drang” style of the 1760s and 1770s with Gossec or Saint-George, and that you find in Haydn (49th Symphony “La Passione”), Mozart (25th – to say nothing of his late symphonies), Kraus, Kozeluch, Vanhal and many others. But yet, much more than just superficially elegant, prim, well-manicured and fluffy music for the aristocratic salon.

The symphonies of Gossec – and, now, of Saint-George – are first and foremost about sheer, unadulterated joy. It must have been something with the France of Louis XV. The disc gathers Saint-George’s two extant compositions in the genre – the rest being chamber music, violin concertos and Symphonies concertantes. The outer movements are brimming with joy, wonderfully dynamic and zestful (there are patches in the finale of op. 11/1, track 12, from 1779, with slightly more emotional agitation). I’d need to pull out some of those early Mozart symphonies out of my shelves and refresh my memories of them in order to assess if Saint-George’s and Gossec’s allegros sound anything like them, but hearing the French composers I don’t even feel the urge to go listen elsewhere and am entirely satisfied with what they offer. There is an elegant, dance-like lilt in Saint-George’s slow movements, together with a discreet, wistful pathos, that transcends what might be superficially galant in them. One distinctive aspect of Saint-George’s style seems to be that I hear in his melodies the underlying presence of the popular songs and dances: explicitly so, of course, in the excerpts from the ballet “L’Amant anonyme” from 1780 (track 6 sounds almost like a Square Dance from Canadian Arcadie), but also in his Allegros, in the manner of (though not as pronounced as in) some of Michel Corette’s Concertos comiques (see my review on Amazon.com of Daniel Cuillier and Ensemble Stradivaria’s recording originally on Adès). But truth is, there is some of that in the finale of Gossec’s “Pastorella” symphony as well.

Contrary to the author of the liner notes, Charlotte Nediger, and ironically – because Saint-George was famous in his time as a violin virtuoso, known as “the inimitable” – it is the Violin Concerto (op. 3/1 from 1779) that I find the most superficial of his compositions featured here, because, a predecessor of Paganini’s, it may be charming but lacks true orchestral textures and sweep, and sounds mainly like a vehicle for virtuoso display. Still, there is a pathetic lyricism in the slow movement that is quite beautiful.

Although much that concerns Saint-George is conjectural, Leclair may have been one of his music teachers, before Gossec, and even if he wasn’t (which the liner notes indeed put in doubt), an excerpt of his own Violin Concerto op. 10/4 from 1745 is included (still according to the notes) by dint of Leclair being influential on just about anybody who wrote Violin Concertos in France until the end of the 18th Century France. I think it would have been better to have 7 more minutes of Saint-George than a snippet of Leclair, sounding, as appealing as it may be, as a pastel version of Vivaldi.

The disc is the soundtrack to the documentary film with the same title, by director Raymon Saint-Jean (DVD published by Morningstar Entertainment, barcode 063634015468 – the film can be viewed on YouTube), but it seems it was recorded independently, and it stands very well on its own. The only recording I can compare this one with in order to assess the interpretive merits of Jane Lamon and her Tafelmusik period-instrument ensemble is with Gossec’s Symphony op. 5/5 “La Pastorella”, also recorded by Mathias Bamert conducting the modern-instrument ensemble London Mozart Players, on Chandos’ “contemporaries of Mozart” series (see link above). In fact, it is for the Gossec that I first bought this disc. In the first movement, Lamon and has more bite and drive than the, here, comparatively slack Bamert, and more transparency of sound, but Bamert’s flutes have more presence and character (in the Menuetto and trio also) – not a small factor in a “Pastorella” symphony. Both finales are fine, with a small edge for Lamon, on account of her slightly more characterful horns. But Lamon’s middle adagio is surprisingly slow-moving and rather heavy-footed – I’d have expected a swifter approach from a period-instrument ensemble, which is in fact what Bamert does, and I find that it works better – although I hear space for an even brisker and light-footed gait. I doubt that violinist Linda Melsted is always absolutely on-pitch in the outer movement of the Violin Concerto. Nothing to prevent anybody from buying and enjoying this CD.

There is a splendidly erudite, if somewhat long-winded and poorly organized article on Saint-George on French Wikipedia – the English version is much more sketchy. His biography is much more complex and conjectural than what is reported in the liner notes. His birth date was long held to be December 25, 1745 but this is now disputed, and it may have been as late as 1747 (or as early as 1739). It is admitted that he was the son of a plantation owner and a slave woman, but even his real parenthood is disputed, and at least three different possible Boulogne, Bologne or Boullongne have been suggested as his genitor. In his time Joseph was as famous as a swordsman and fencer as he was as a composer, but also as an exceptional dancer, equestrian, swimmer and womanizer. Like Gossec, he enthusiastically sided with the French revolution – but, unlike Gossec, even more as a military than as a musician. He is stuff for a film.