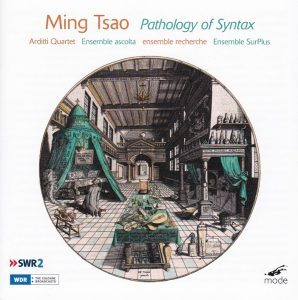 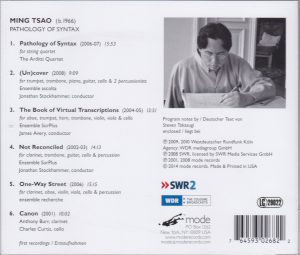 I had never heard of Ming Tsao before chancing on this CD among an eBay seller’s other and cheap offers (the ones you look at to benefit from postage rebates on combined shipment). There was the Arditti Quartet among the perforrmers, I listened to the 30” samples on Amazon and the music seemed intriguing, so I decided to give it a try. Turns out he’s a “Chinese-American composer active in Europe” (not where I dwell), professor of composition at Göteborg/Gothenburg University (notes don’t say, but that’s in Sweden), a student of Brian Ferneyhough and Mario Davidovsky, and that he holds a PhD in Music Composition from the University of California at San Diego, an MA in Mathematics from the San Fracisco State University, an MA in Ethnomusicolgy from Columba University and a BM in Music Composition from the Berklee College of Music in Boston – now here did he waste all that time he had on his hands in his early years? He doesn’t have a Wikipedia entry.

The music souds often like a mixture of the kind of instrumental minimalism championed by Salvatore Sciarrino (music starting in the pianissimo dynamics, developing from the edge of silence, not going for “melody” or “harmony” in the traditional sense but remaining on the threshold of sound or even noise, with hushed but snarling or screeching harmonics, whispers of bows on strings, glissandos sounding like motorcycle engines or falling shells and duck for cover everybody! and cello drones souding like a B52 at low altitude) and the high complexity of Ferneyhough or Xenakis (violent and explosive outbursts, strong but short dynamic swells, bows or pizzicato “ripping” the strings, complexity of the intertwining instrumental lines). I’m taking my examples from the first piece on the CD, “Pathology of Syntax”, a string quartet, but it applies to all of them.

When you hear music like that, out-of-the-beaten-track even of contemporary music styles, you want to know more about it, its aim, its processes. But I find the liner notes often altogether verbose, off-the-point and incomprehensible. Apparently a number of those pieces are elaborations on classical compositions, Beethoven’s late quartets in “Pathology of Syntax”, his “Sonata opus 111” in (Un)cover, Mozart’s oboe quartet K. 370 in “The Book of Virtual Transcriptions”. Even when I know it I hear nothing, absolutely nothing of the sources – no criticism implied, I find that “post-modernist” quotations rarely work in contemporary music, usually they simply and embarrassingly jar. Anyway, you’ll find more info about Tsao and some of these compositions in the interview posted on the website of UC at San Diego.

One thing I do understand in the liner notes, though, and which confirms my reactions to the music: it is about “Not Reconciled” but it applies to all, really: “Tsao speaks of the ‘traces of music: the sound of fingernails brushing against strings, the rattling of snares on a snare drum or the clicking of clarinet keys’. These are all the artifacts of musical production, the debris if you will. And at first glance, like any debris – even that of history… the debris of memory – the assumption of disorganization is misleading: in actuality, its precision is ruthless.”

Jump now to the disc’s conclusion: Canon for clarinet and cello is again very typical of Tsao’s use of acoustic instruments as much (ore even more) to produce “sounds” (mechanical, breath through shaft, wooden part of the bow bouncing off strings, or horsehair softly caressing strings so that the strings do not actually vibrate and produce no pitch) as to produce actual pitches.

And it poses the question: what is “music”? if music is a certain way of organizing sounds and the acoustic vibration of air, if music is a flower that grows and blossoms from mere “sound” or possibly even on “noise”, when does noise or sound cease and give rise to “music”? When does a “sound” actually become a “pitch” or when does it cease to be a pitch to become a mere (?)mechanical sound? The question may be addressed to this entertaining and unimportant thing which is music, but it’s a deep and heavy question, the same posed by scientists and philosophers and religious thinkers when they examine how “life” might have developed from “matter”, and it leads them to interrogate the very definitions of “life” and “matter”. Tsao explores the threshold.