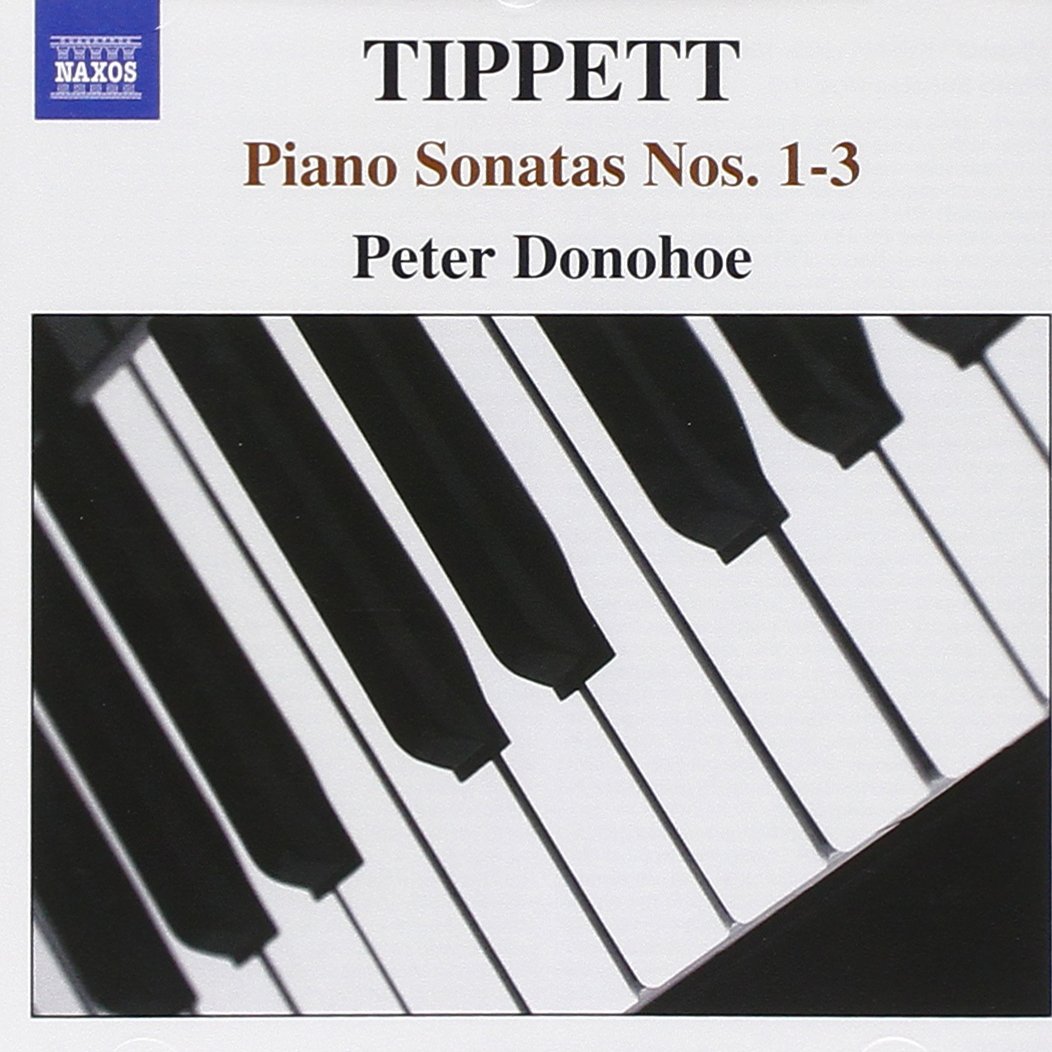 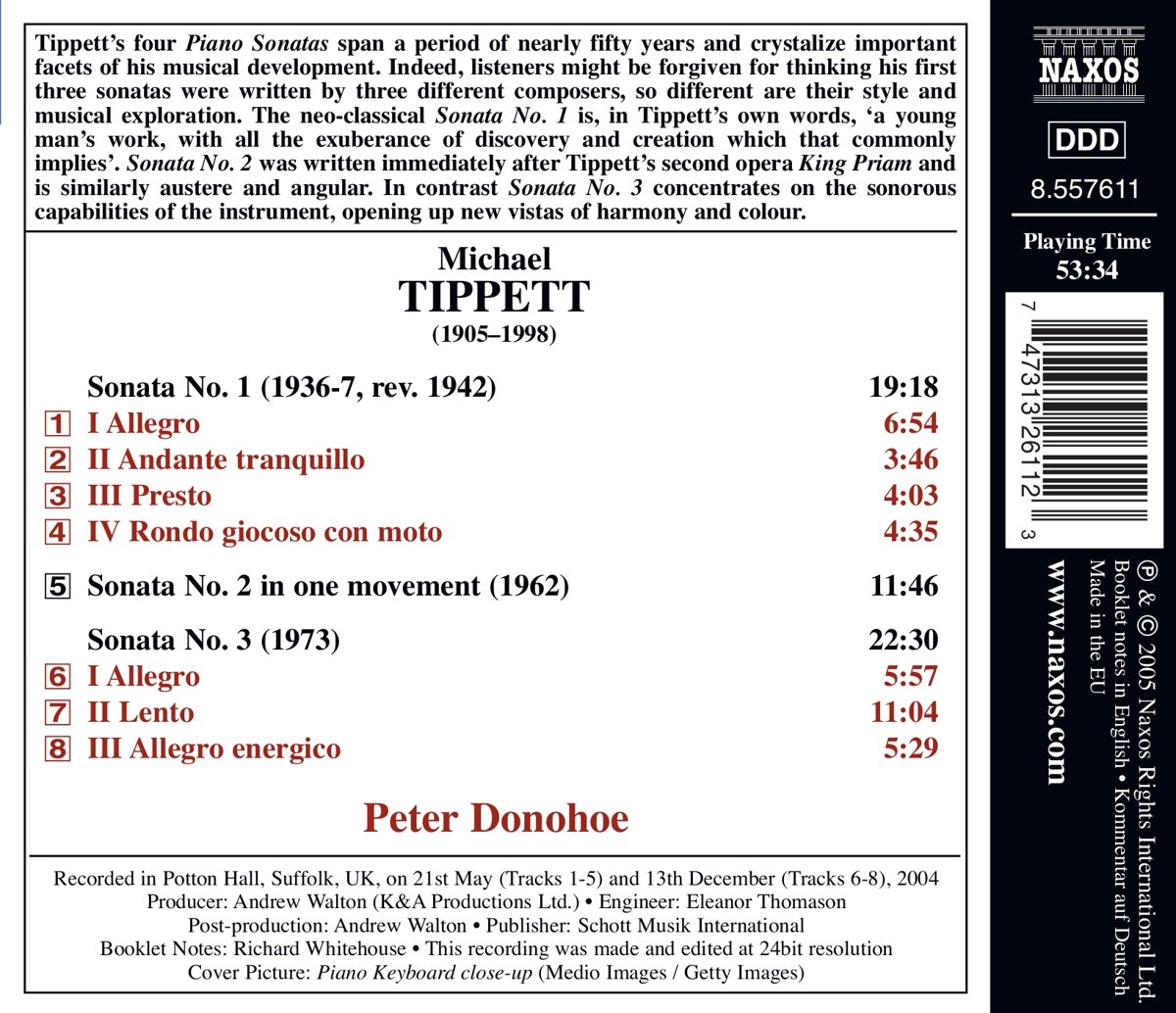 Not the best readings of these masterpieces
Originally posted on Amazon.com, 26 December 2013

I’ve spent many hours with Michael Tippett’s four Piano Sonatas and they constitute a great and highly original body of works. I refer the reader to my review of Paul Crossley’s traversal of the four on CRD for a general presentation of the works, including a not-to-be-missed revelation about the “mystery chord” contained in the slow movement of the Third Sonata.

The Sonatas of Tippett have been well-served on disc in the stereo and digital era, by John Ogdon (the first two, best found on EMI’s 2-CD reissue of great Tippett recordings of the 1960s on  7 63522 2), Paul Crossley (see link above), Murray Perahia (the first, on Sony’s 4-CD set “Murray Perahia: 25th Anniversary Edition”), Steven Neugarten (the second, on Metier, with works of Sackman, Saxton and Connolly), Nicholas Unwin (the first three on Chandos, and Sonata No. 4 on Metier with works of Robert Saxton, Colin Matthews and Constant Lambert) and Steven Osborne on Hyperion (I’m not so happy with Graham Caskie‘s trudging Third Sonata on Metier). Donohoe is interesting if only because he strays from the general norm. In the first Sonata, his first movement is urgent, even pressing and almost nervous. This is no subjective impression: he takes the movement in 6:49, compared to Crossley’s 7:55, Unwin’s 7:47, Ogdon’s 7:46, Perhahia’s 7:23 and Osborne’s 7:15. In fact, he recaptures something of the approach of premiere performer (in 1938) and recorder (in 1941) Phyllis Sellick (reissued on an NMC CD, D103, with other among the earliest recordings of Tippett’s music), so it may be very true to the way Tippett conceived his work. But, either by dint of the recording or his own touch and pedalling, Donohoe is also very dry and lacking bloom and sonic sensuousness, never letting the piano resonance fully unfold and fill the acoustic space. His 4th variation, at 3:53 – a brilliant exercise in whimsical and jaunty dotted eighth-note+sixteenth note – is taken so fast as to almost lose the music’s characteristic rhythmic shape. At least Donohoe is consistent with himself in his approach to the second movement, dry and very urgent again (compare his 3:37 to Crossley’s 5:15, Ogdon’s 4:53, Perahia’s 4:31, Unwin’s 4:16), but it suits the music better, an already austere exercice in two-part polyphony. On the other hand his Scherzo – a movement which can and should explose with thrusting energy – is taken at a very cautious tempo and is disappointingly unexciting. But it’s also a matter, again, of how the piano resonates – and in this case, doesn’t: Osborne on Hyperion doesn’t take it significantly faster, but he has the pounding and resonating power that avoids any impression of trudging. Donohoe’s piano sounds muffled in comparison. But I have no issues with his Finale.

The same parameters are at play in the 2nd. The Sonata is made of a succession of thematic blocks, each with its own tempo and character (always attention-arousing), returning in slightly modified form but never combined. As Tippett himself put it (in the liner notes to Crossley’s recording: “Everything in the sonata proceeds by statement. The effect is one of accumulation; through constant addition of new material; by variation and repetition. There is virtually no development and particularly no bridge passages. The formal unity comes from the balance of similarities and contrasts”. At times I find Donohoe’s interpretation a bit too dry and jaunty (in the way for instance he twists the rhythm of Tippett in the opening theme), but he is more up to the piece’s power (as in the crashing second thematic block first heard at 0:15) and atmosphere (as in the lyrical theme first heard at 0:33 which constitutes the Sonata’s fourth thematic block, or in the chime-like theme at 2:11, part of the Sonata’s 6th block, which Tippett indicates, rather contradictorily, “carillonando non legato”), and sometimes that very dryness is much in situation (as in the quasi-drum roll that makes up the fifth thematic block at 0:44).

I have a few issues also with his Third, first for taking, like Graham Caskie on Metier, the first movement at a tempo significantly below Tippett’s. There is a positive side to it, in that it makes the movement possibly easier to take, because less furiously pounding, but then it does lose the sense of furious pounding that is integral to Tippett’s original conception, and that Crossley, Unwin and Osborne render perfectly. It also deprives the passage at 2:46 of a touch of its whimsicality. I’m not entirely happy either with Donohoe’s balancing of the two hands in the first movement, letting some important left-hand details get covered (at 1:16 for instance, and it recurs later). But Donohe is dashing in the Finale, almost at the expense of clarity of articulation, but exuding tremendous energy. He also takes a very urgent approach of the slow movement (his 11:03 is the fastest of all versions; compare with Unwin’s 11:28, Crossley’s 12:19, Osborne’s 14:18 or Caskie’s 15:10) but with no loss of atmosphere thanks to his beautiful control of the keyboard’s sonorities. I’m not happy though with the way, in the statement of the slow movement’s theme, he shortens the length of the chords’ last quarter note, in effect changing Tippett’s all-pervading 7/8 rhythm into a 6/8. He does it again in the third variation (6:14), now shortening the value of the fifth beat (and so had Crossley and Caskie). In the second variation (4:16) there is a very characteristic “limping” rhythm that emerges from the dense texture – but not with Donohoe, who (like Crossley) doesn’t play it sharply enough. These are small details that won’t be perceptible to listeners without the score and they certainly don’t come in the way of the music’s beauty, but then it may not be entirely indifferent even to the listener without score that this he is not hearing exactly what Tippett wrote. For that, go to Unwin or Osborne.

Despite my reservations, listeners won’t go wrong with the recording of Donohoe – but they will find interpretively better with Unwin and Osborne. The other and major drawback with Donohoe is that a CD won’t fit all four Sonatas, and he offers only the first three. So does Unwin on Chandos, but at least you can find Unwin’s Fourth on another label, Metier, paired with Robert Saxton’s sonata and Colin Matthews Studies in Velocity (see link above). Paul Crossley also performs all four (on two CDs on CRD) and has a unique legitimacy in these works, as the Third and Fourth were written for him, but the CRD set comes with no complements and each CD offers a relatively short measure. So the absolute first choice now is Osborne on Hyperion, not only because he offers the most coherent complement with Tippett’s two compositions for piano and orchestra, but also because he is, interpretively and sonically, the best. True, there is a premium to pay for Osborne, but it is worth it. And if price is an issue, as I write, Unwin doesn’t sell more expensive than Donohoe.