Reissue of important historical recordings of the music of Michael Tippett, from an era – with one exception, the mono 1950s – when they were scarce. The two song cycles, “Boyhood’s End”, written in 1943, and “The Heart’s Assurance” (1951) are closely associated with Peter Pears and Benjamin Britten. Tippett had connected with them upon their return from America in 1942 – through Pears rather than Britten, in fact, as Tippett was looking for a tenor to sing in the Gibbons performance he was then giving at Morley College, a famous London institution for adult education where Tippett was master of music. Though 8 years younger than Tippett, Britten was the child prodigy and was already recognized as a major figure on the British musical scene, while Tippett was a late blossomer and his reputation in the 1940s had only started to grow. Pears and Britten had been enthusiastic about his Oratorio “A Child of Our Time” whose manuscript was then stacked in a drawer with no hope of being played in Britain’s war-time circumstances, and they were instrumental in securing its premiere performance in 1944 (in which Pears sang). Both song cycles were written for them, both reflect the trio’s common interest in Purcell, the flexibility of his word setting and his florid melismata, and both were premiered by Pears and Britten, respectively in 1943 and 1951. They are great compositions, maybe not immediately easy to take, but wonderfully imaginative, starting with their choice of text: “Boyhood’s End” is a twelve-minute long cantata for tenor and piano written on a short excerpt in prose narrative from the autobiography of author, naturalist and ornithologist William Henry Hudson, reminiscing as an old man on the vibrant “ecstasy” of the contemplation of nature and nature’s beings in his boyhood – the nostalgia is somewhat reminiscent of Barber’s Knoxville. “The Heart’s Assurance” is set on splendid and cryptic poems by two poets killed during World War II, Alun Lewis and Sidney Keyes, dealing with, in the composer’s own words, “love under the shadow of death”. But both cycles are remarkable also for their wealth of musical imagination, both vocally and pianistically. The vocal line jumps from swellingly lyrical to capriciously playful and floridly decorative, and Tippett’s characterization is remarkably responsive to the words and meaning. I have the score of “The Heart’s Assurance”, and while the way the piano part anticipates the lush orchestral writing of The Midsummer Marriage has been pointed (Meirion Bowen, Tippett’s assistant, even published an orchestration in 1995, with the composer’s approval), I see there much also that anticipates Tippett’s most mature piano writing in the 3rd and 4th Piano Sonatas.

The recordings were made in 1952 and first published together on the Argo label. Their first CD reissue was on the Australian label ABC Classics in 2001, in a box devoted to Noel Mewton-Wood, the gifted Australian pianist here accompanying Pears, closely associated with Tippett 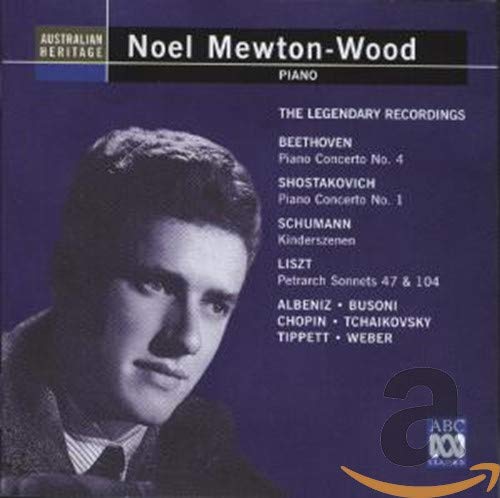 and Britten in those years, and who committed suicide in 1953, apparently inconsolable over the death of his own lover (ABC Classics 461 900-2, barcode 028946190029). In the liner notes of that ABC set, the famous broadcaster and music critic John Amis recalls that when he asked Tippett if he would contribute a piece for the Mewton-Wood memorial concert that he was organizing at Wigmore Hall in December 1954 (in which Britten’s Canticle No. 3, written as a tribute to the memory of the pianist, was premiered), Tippett replied that the last song from The Heart’s Assurance, “Remember your lovers”, said it all, and it was chosen to conclude the concert.

This EMI reissue dates from 2003. The very special timbre of Peter Pears, with its nasal characteristics and falseto overtones is something that takes some getting used to – and I never entirely did. I’m leafing through Humphrey Carpenter’s huge and minutely detailed biography of Britten (ISBN-13 ‏: ‎ 9780684195698), and he comes up with an anecdote, a childhood friend of Britten first hearing Pears singing in 1938, and remarking how Britten’s “mother’s voice and Peter Pear’s voice were fantastically similar… That’s the first thing I noticed… the same voice” (page 122). Well, yes, I can hear it too. Britten himself is quoted by Carpenter as expressing his dislike for simply “beautiful voices”, and being moved by voices with personality (page 151). Well, I prefer the less “personal” but more beautiful, light and clear tenor voice of of Philip Langridge on Decca (available only on 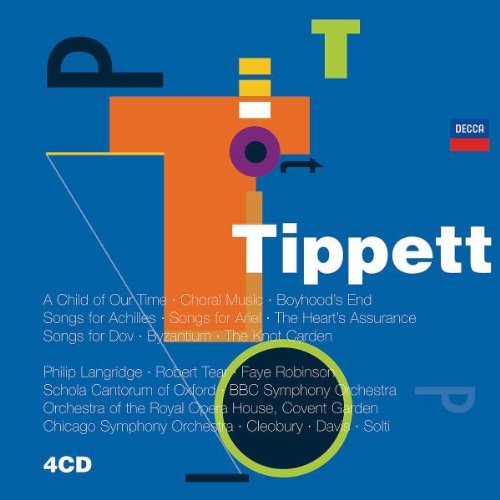 Martyn Hill on Hyperion (CDA 66749, barcode 034571167497). And with that, the 1952 sonics frustratingly muffle and send the piano to the background – that’s a big loss in Tippett’s song cycles, in which not just the vocal melismata are florid, but also the piano writing (Britten even complained about its difficulty). The final note of “Boyhood’s End”, a high-pitched decrescendo piano on the word “void”, must be horrendously difficult to sing, but there should have been a retake: the way Pears “strangles” his voice to cut it off is simply awful.

The recording of the “Songs for Ariel” is a later one, from 1965, and the only one in stereo (but with significant tape hiss in this transfer), first published in a collection of English songs recorded by Pears and Britten for Argo (the rest of the recital has been reissued in a number of

Pears collections, including by Australian Eloquence 480 1273, “A Treasury of English Song”, barcode 028948012732). They are the only numbers salvaged at the time from the incidental music Tippett had written for a performance of The Tempest in 1962. In 1995 Meirion Bowen elaborated from the unpublished incidental music a Suite (hitherto unrecorded) which includes the Ariel Songs and a new one, Caliban’s Song, Tippett’s last composition, written for the tercentenary of Purcell’s death. The three Ariel songs are short (less than 5 minutes in all) and wonderfully whimsical. Pears’ timbre sounds slightly clearer in 1965 than in 1952.

Although a continuous cantata, Boyhood’s End gets five cues (and not three as indicated on the back cover’s track listing). The texts of the songs are not included, which is regrettable. Still, whatever one’s misgivings with the art and sound of Peter Pears, these are invaluable historical documents for the Tippett fan.

And so is the Amadeus Quartet’s recording of the Second Sting Quartet, a composition fom 1942. Tippett’s first three String Quartets, written between 1934 and 1946, are marked by the Beethovenian model that so enthralled the composer in those years and you can hear the influence, but, in the Second more than in the First, Tippett’s original voice can also be clearly recognized, especially in the first movement, full of gentle grace, with great melodic appeal and Tippett’s typical subtle rhythmic ambiguity, by which bars in 2/4 time signature are filled with irregular rhythmic goupings alternating between 1/4 and 3/8 pulse that defy the bar line, and in the irregular meters of the third, an exhilarating dance that could have been written by a Central-European composer, not pounding and gritty enough for Bartok, but Kodaly or Martinu, evoking even Brahms at his most Gipsy. The second movement is a gloomy Fugue that sounds like a slightly modernized shard from Bach’s Art of Fugue and evokes echoes of the first movement from Bartok’s music for strings, percussion and celesta (heard on the radio in January 1938 and also an influence on the Concerto for Double String Orchestra); its theme was conceived in 1938, at the time of the infamous Munich accords by which the Democracies gave away Czechoslovakia to Hitler against the hope for peace – and we know the outcome of that – although Tippett the pacifist and conscientious objector must have seen those as a blessing rather than as a fateful shame. The Finale is brash, rhythmic and syncopated, and with a few striking lyrical lines as well.

The recording premiere was made for Decca by the Zorian Quartet in 1947 – an outstanding version but a recording never reissued on LP (it has been made available on CD by NMC, “Remembering Tippett”, with other recording premieres of the composer’s music), so the Amadeus Quartet’s HMV recording, made in 1956, was a welcome substitute and had the field very much to itself until the

Fidelio Quartet recorded it in 1970 for Pye, GSGC 2064 (not reissued on CD), followed by the Lindsay Quartet on Oiseau Lyre in 1975 (reissued on CD in 1989 by Decca, 425 645-2 barcode 028942564527). Now of course, in the face of the stereo and digital recordings, the Amadeus’ version must be reserved to the diehard Tippett fans and collectors with a taste for historical recordings, but interpretively they were, like the Zorian Quartet, very much on top of the music, as dashing as the Zorian Quartet in the irregular meters of the third movement but somehow giving an impression of greater relaxation, and slightly more laid-back in the Finale. Of note also is that, like the Zorian Quartet and like the Lindsay Quartet, they take the Fugue at a much slower tempo than the one prescribed by the score (circa 72 quarter-notes per minute, to the Zorian’s 63, Amadeus’ 60 and Lindsay’s funeral 54), adding to the sense of gloom. One had to wait 1991 and the Britten Quartet to hear it played as Tippett had written it (on the two-CD set from Collins Classics 70062, barcode 5012106700628, see entry on Discogs.com). One supposes that this choice of a slow tempo resulted from discussions with the composer and had his approval, since all those ensembles worked so closely with him. Yet, I prefer the swifter approach. It detracts nothing of the sense of bleak burden, but adds a dogged assertiveness, as if trudging on in spite of everyting. The Britten Quartet’s on Collins is the best version I know of Tippett’s Quartets (I haven’t yet heard the Kreutzer Quartet on Chandos). A pity they never recorded String Quartet No. 5. 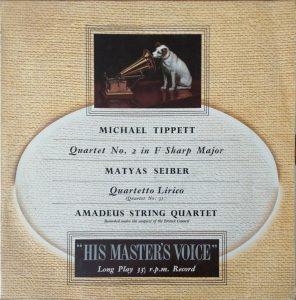 The original pairing of the Amadeus Quartet’s recording on HMV was the same String Quartet No. 3 / Quartetto lirico of Mátyás Seiber reissued here. It was written from 1948 to 1951 for the Amadeus Quartet who premiered it. Seiber was born and trained (by Kodaly in composition) in Hungary and established in England in 1935, becoming closely associated with Tippett at Morley College during the war years. While the quartet is lyrical indeed as befits its subtitle, don’t expect the lyricism of Delius or Bax: it sounds like a mixture of Berg and Bartòk – not a bad combination. Seiber was considered an important modern composer back then. His death in an auto accident in 1960, aged 55, has sent him to relative obscurity, and it is good that EMI restored this recording to life. 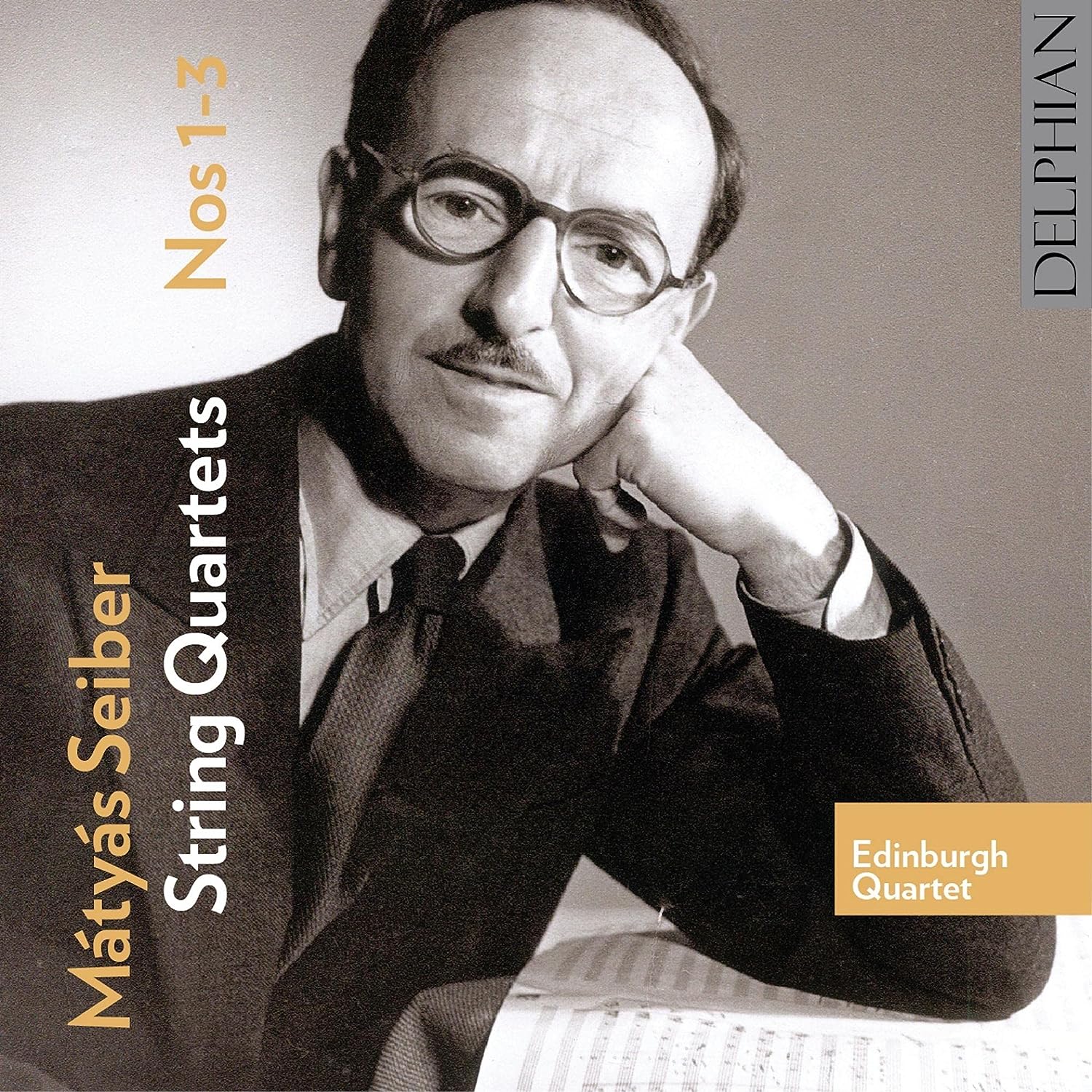 Not first choices then, but an indispensable reissue for the serious Tippett collector. TT is a generous 77:29, the liner notes on the Tippett compositions are by the composer himself. For more Tippett, see my comprehensive discography (link will open new tab to pdf document that you can read online and/or download).