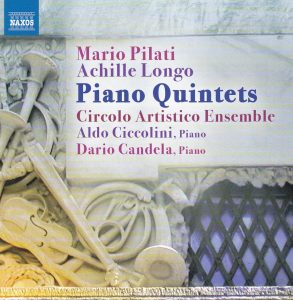 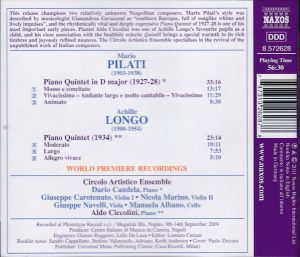 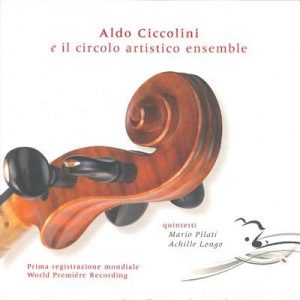 Naxos’ little presentation blurb on the back of the jewel case calls these two composers “relatively unknown Neapolitan composers” – quite an understatement. I consider myself fairly knowledgeable on the subject of neglected, “off-the-beaten-track” composers, but this is the first time I come across these two names. And I must not be the only one, judging from the fact that the International Music Scores Library Project doesn’t even have an entry for one of them, Achille Longo (1900-1954) – they do have one for Alessandro Longo (1864-1945), which even offers the score of a Piano Quintet (link will open a new tab), and IMSLP seems to confuse the two as they feature the Naxos CD as an audio illustration, but these are not the same composers and compositions – a check on Wikipedia shows that Alessandro was Achille’s father. Incidentally, every music lover is familiar with Alessandro Longo, not through his compositions… but through his cataloguing of Domenico Scarlatti’s keyboard sonatas (the famous “L”, as in Sonata L XXX), long the reference before Ralph Kirkpatrick’s catalogue numbering took over.

So, in my pantheon, I’d characterize these two as “totally unknown Neapolitan composers”. Well, it only brings further proof again that posterity is a bitch.

Mario Pilati’s Piano Quintet dates from 1927-28 and it is a magnificent work, to my ears a mixture of Ernest Bloch – the thorny and aggressive Bloch of those years, the composer of the first Violin Sonata and Piano Quintets – and Ravel. Reminiscent of Bloch is the dynamism, the vehemence fraught with emotional tension, the rhythmic bounce, at times motorically pounding (scherzo); but it’s mixed with touches of Ravelian color and delicacy (and I am thinking here of the Piano Trio) and occasional romantic flights. There’s no slow movement per se, just slower & lyrical sections in each movement.

On the basis of the Quintet, Pilati is definitely a composer to explore further. The liner notes offers convincing explanations as to why he fell in such oblivion. First, he died at the young age of 35 (1903-1938), which doesn’t help establish a solid reputation. Also, he was uncomfortably sandwiched between the generation of Pizzetti, Respighi, Maliperio and Casella on the one hand, and the firebrand “throw-it-all-away” gang whose figureheads were Nono, Berio and Maderna. Belonging to the same generation as Pilati were Goffredo Petrassi, Dallapiccola, Vittorio Rieti, Nino Rota and Scelsi, and it is significant that among Pilati’s predecessors and contemporaries, the more romantically-bent, like Pizzetti and Respighi, underwent (despite the latter’s ever-popular Roman Trilogy) an eclipse of sorts after the war, and that the ones that were able to secure some amount of of international exposure after the war were the more modernist among them, Malipiero, Casella, Petrassi, Dallapiccola.. and of course the maverick Scelsi, whose discovery happened only in the late 1970s and early 1980s. Finally, what the liner notes don’t say is that composing in Fascist Italy may not have helped the exposure of Pilati’s work outside of his country (except, one supposes, in Ethopia)

Longo’s Quintet, from 1934, isn’t as original but it’s nonetheless an enjoyable work if you are ready to disregard the aesthetic controversies of the time and after between avant-garde and arrière-garde. Rooted in a 20th century kind of romanticism, it unfolds a vehement, rent lyricism alternating with more tender moments. But it also displays great freedom of form and expression, moments of humor even in the Finale, and the best comparison I can come up with is the music of the whimsical Vincent D’Indy.

In the absence of scores I can’t comment on the interpretations, only say that they offered much pleasure. Pianist Dario Candela plays the Pilati, and Aldo Ciccolini the Longo. Ciccolini, himself born in Naples, was a pupil of Longo in harmony and counterpoint and, although aged only 9 at the time, already in Longo’s class as the composer was writing the Quintet. In a touching testimony in the liner notes, he claims Longo as his “spiritual father” and tells his love of the Quintet – considerations that fill this recording with immense authority, especially since Ciccolini passed away in 2015, six years after making it. Apparently the Naxos CD is a reissue of one originally published by the obscure Italian label Eterfon. TT 56:26. Music-lovers interested in exploring beautiful music from the off-the-beaten-track shouldn’t miss that one.