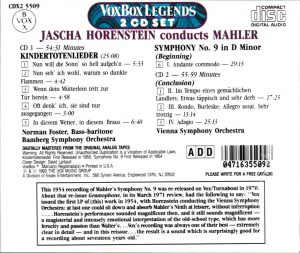 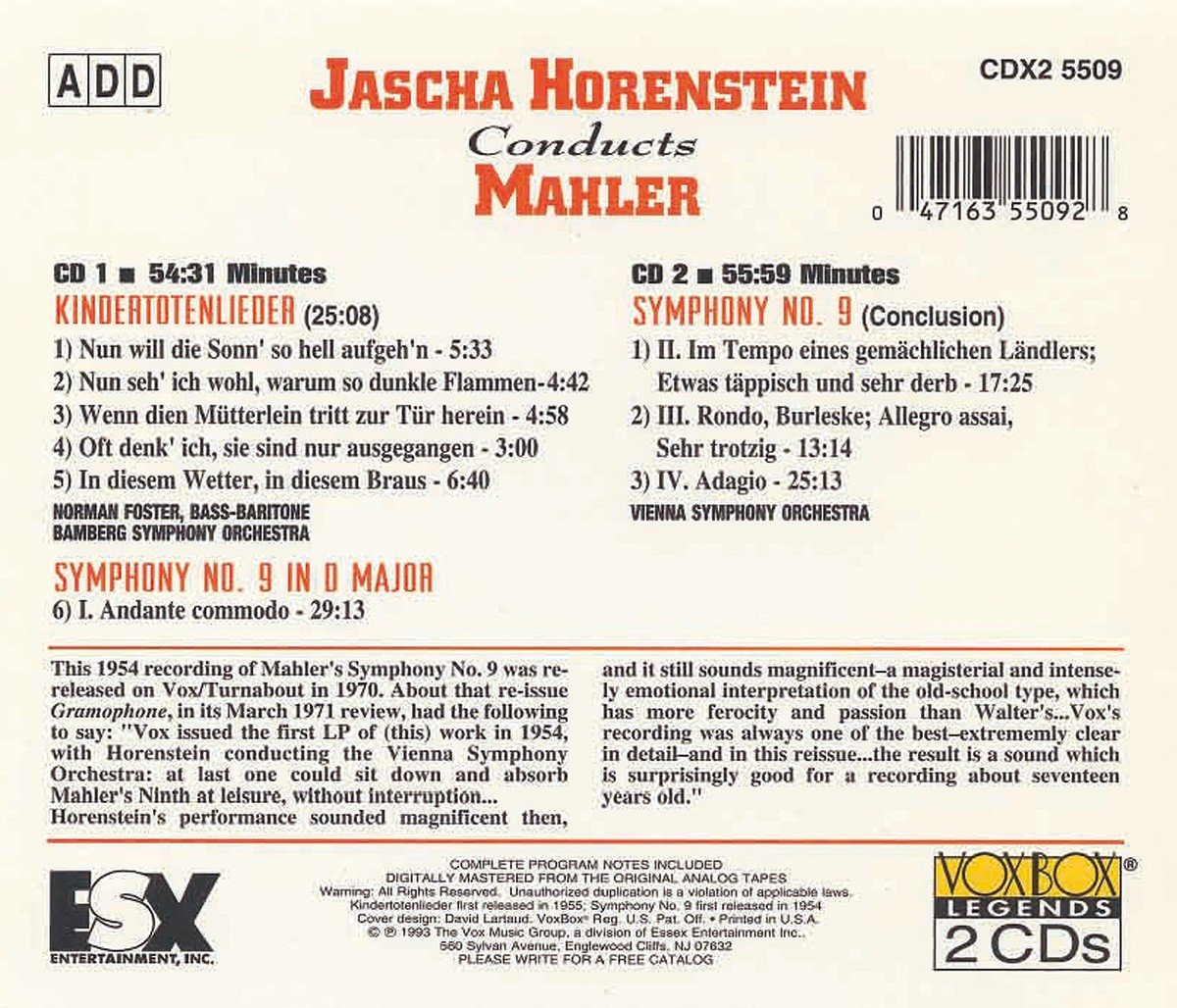 A historical document from the early mono era, but one that retains its entire musical validity today
Originally posted on Amazon.com, 5 November  2011

Jascha Horenstein’s recording of Mahler’s 9th Symphony, made for Vox with the Vienna Symphony Orchestra (not the Philharmonic, but Vienna’s “lesser” symphony orchestra) was an important milestone in the composition’s recorded history, and not only because it was the second ever – after Bruno Walter’s live recording with the Vienna Philharmonic in 1938 (link will open a new tab to my review) – and the first to be released on the new medium, the 33rmp Long Playing record. Although the CDs product info says only that the recording was released in 1954, Peter Fülöp’s invaluable Mahler discography says that it was recorded in June 1952 (and released in Sept. 1952 as well – July 1954 is when it was reviewed in The Gramophone) and I’m inclined to trust it. Despite the orchestra’s shortcomings (the ragtag group of strings lack the silkiness to fully bring out the more tender moods of the first movement), Horenstein’s interpretation is outstanding. He has a perfect grasp over the symphony’s variegated moods and tempos. His brass and woodwinds have plenty of pungency and instrumental character. I could quibble with a few details, like an “allegro” passage that could have been more furiously animated at 6:20 in the first movement (measure 102), and likewise with the “leidenschaftlich/passionate” passage starting at 12:11. But those are details in the overall picture, and detail for detail, unlike Walter (also in his stereo remake from 1961, see my review) and Bernstein (in his first recording, made in 1965), Horenstein is true to score at 6:35 by taking the theme, now played by the horns after the first great climax, at the previous allegro tempo rather than at the ensuing, brutally slowed down “Tempo I subito”. Another example of Horenstein’s great shaping of the symphony’s moods is the sense of an ominous stasis he establishes with the brass fanfares at 14:33 (still in the first movement, figure 13).

In the two fast and rambunctious middle movements, Horenstein’s approach is uncannily similar to Bruno Walter’s in 1961 (and I should really turn that phrase around), with very similar timings not only overall (17:23 to 17:30 in the Ländler and 13:11 to 13:03 in the Rondo), but also section by section , and again with lots of instrumental character and sassiness. If you go into details, Horenstein’s Ländler may be his most questionable movement, mainly because he doesn’t establish the necessary contrasts between the three tempos indicated by Mahler (faster Tempo II, slow Tempo III and a Tempo I that should be somewhere in the middle). He adopts a slow opening tempo (Tempo I), with a fine sense of the clumsiness called for by Mahler (“täppisch”), but, at an even imperceptibly slower pace than Walter’s almost a decade later, verging almost on the pedestrian (and the saucy – “keck” – horn giggles are covered). His Tempo II is vigorous and robust rather than really brisk, and his tempo III doesn’t establish much contrast with the Tempo I, especially when the latter returns at 13:50 (measure 523) at an even slower pace than the one established at the beginning. In the same vein, it is not clear if Horenstein really returns to Tempo I at 6:01 as instructed by Mahler (measure 230) after the “molto rit.” of the previous bar (applied to Tempo III), rather than at the same Tempo III. In fact in that passage, leading to the return of the brisk Tempo II at 7:23, Horenstein does what he wants in terms of tempo changes rather than what Mahler wrote. I’m just signalling here Horenstein’s liberties with Mahler’s score and mean no criticism: his way here and in his other departures from score does make sense musically. The glockenspiel is artificially spotlighted (as in the passage starting at 7:54/measure 291) in a manner that I thought was specific to Scherchen’s Mahler, but I don’t find it shocking in the context of the movement’s sauciness.

Again, as in the approach adopted by Walter 9 years later (and in contrast to Walter’s in 1938 or Leopold Ludwig’s in 1959 on Everest – the first stereo recording of the piece), Horenstein in the Rondo-Burleske goes for massive power and vigor rather than forward drive. Here the relative shrillness of the strings is perfectly in context, and Horenstein coaxes his orchestra to all the required defiance (“trotzig” is Mahler’s character indication). Unlike Walter and Bernstein (but like Ludwig), Horenstein is again true to score at 6:11 (measure 347), when enters the movement’s B section heralded by violin tremolos and flute fluttertongues, where he does not apply the slowing down of tempo immediately, but only 8 bars later. His flexible molding of tempo offers moments of great expressivity in that slower section (“mit grosser Empfindung”, Mahler writes at 7:22, “with great feeling”, and that’s how Horenstein plays it). He is always consistent with tempo and, unlike Bernstein, he doesn’t constantly change to fit the instant mood: he sticks to what Mahler wrote, and if Mahler didn’t prescribe a tempo change, Horenstein keeps a steady pace.

Suitably, Horenstein’s finale is the culmination of his reading, and, totalling 25:11, it was for years to come the slowest version ever: compare to Walter’s 18:06 in 1938 and 21:02 in 1961, or Bernstein’s 22:55 in 1965. Abravanel, in 1969 with the Utah Symphony Orchestra on Vanguard,  was in the same league as Horenstein, but only in 1979 did James Levine, on RCA, conduct a significantly slower finale, and a really extreme one at that, clocking 29:49. Needless to say, Horenstein develops great intensity, and it is not just a matter of tempo, but of intensity in the string bowing (“grosser ton”, Mahler instructs). One factor in this intensity is that, unlike, say, Walter, Horenstein makes no amends for his listeners’ supposed impatience, and when, even at a very slow tempo, Mahler writes two beats of silence, or holds one long note over two or four beats, Horenstein will make it last exactly what’s written rather than shortening those rhythmic values. I’ll always be in doubt that Horenstein’s very deliberate “sehr fliessend” (very flowing) at 15:53 (measure 118) is anything close to what Mahler intended – and of course the tempo reached here is the logical consequence of all his other tempo choices – but still, as it is, true or not to the score’s tempo indications and to Mahler’s intentions, it develops breathtaking intensity and is perfectly convincing. My only quibble then is that, at the end, in the final bars with their sparse orchestration and desolate mood, Horenstein’s dynamic range is up a few notches too high, his ppp and pppp sounding mp. Well, perfection is not of this world, if only to remind us of our mortality.

So, this recording remains still today outstanding in purely musical terms. Remains that it is 1952 mono, and as excellent as it was for its age, Mahler begs for spacious stereo. In the first movement in particular too many orchestral details get lost, as well as a sense of orchestral space (It didn’t strike me as much in the two “loud” middle movements, where I found, on the contrary, that many orchestral details clearly came out, or in the finale, in which the orchestration is either heavily bent on strings and brass playing forte, or very sparse). As it is, this version is an invaluable document on the recorded history of the composition, one that still remains entirely valid musically today, and as such it is indispensable for the serious Mahlerite. Those who learned Mahler’s composition through Horenstein’s double LP in the 1950s and mono era were not mislead: they were offered a masterly and entirely convincing view of the symphony, one to which little was added subsequently in terms of depth of understanding and scope of emotions. Still, for full musical enjoyment today, one must go to any of the great versions from the stereo era, starting with (no value judgement or hierarchy implied, I am only indicating the chronology)  Walter’s 1961 remake, Barbirolli‘s 1964 recording with the Berlin Philharmonic and Bernstein’s first recording from 1965 in New York (for Bernstein now go to the so-called Carnegie Hall remasterings, they are a major sonic improvement over the previous CD releases).

Unlike some, I don’t find that Norman Foster’s voice is too heavy for the Kindertotenlieder (recording date is the one provided by Peter Fülop), on the contrary it has both nobility and emotion. One can eternally regret that Hans Hotter never recorded the cycle (or any Mahler for that matter), but this is as close as you will get to Hotter (so much so that the last song strongly evoked Schubert’s Erlkönig). Still, it is true that Foster and Horenstein take a plangent view of these “funeral ditties” (“Totenlieder” would be funeral songs, and “Kinderlieder”, children’s songs, ditties, so Kindertotenlieder best translates into Children’s funeral songs, or funeral ditties), one that possibly tries to underline slightly too much the emotions already contained in the notes. The very essence (and seizing beauty) of Friedrich Rückert’s poems used by Mahler lies in their very understatement: the deaths of the children are always alluded to (“when your mother steps in through the door, my gaze doesn’t first fall on her face, but at the place where your dear little face would be…”) but never give way to an outpouring of grief. It is because the narrator keeps the emotion reined in that the emotion pours out of the listener. In the same vein (and, possibly, by way of consequence), when Mahler’s character indications at the beginning of the first two song are “slow and dispirited” (langsam und schwermütig), and “calm” (ruhig), he also adds “without dragging” (nicht schleppend). Or, in the third song, his opening indication may be “heavy, muffled” (schwer, dumpf), but that applies only to the orchestral introduction, to be followed by “more flowing” (fliessender) when the voice enters, and “more agitated” (bewegter) a little later. Foster and Horenstein don’t really heed those indications. Nonetheless, when comes the final moment of appeasement, at the end of the last song, after the storm has abated, and Foster, in his noble, fatherly tone, delivers with simplicity the lines “In this weather, in this gale, in this windy storm, / they rest as if in their mother’s house, / frightened by no storm, / sheltered by the Hand of God”, one cannot fail to be moved to tears.