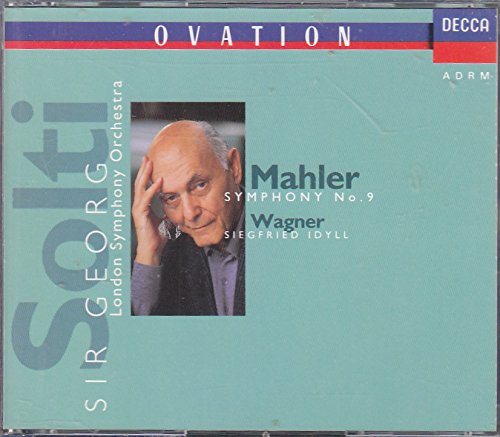 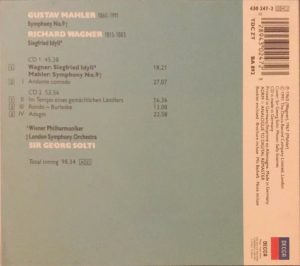 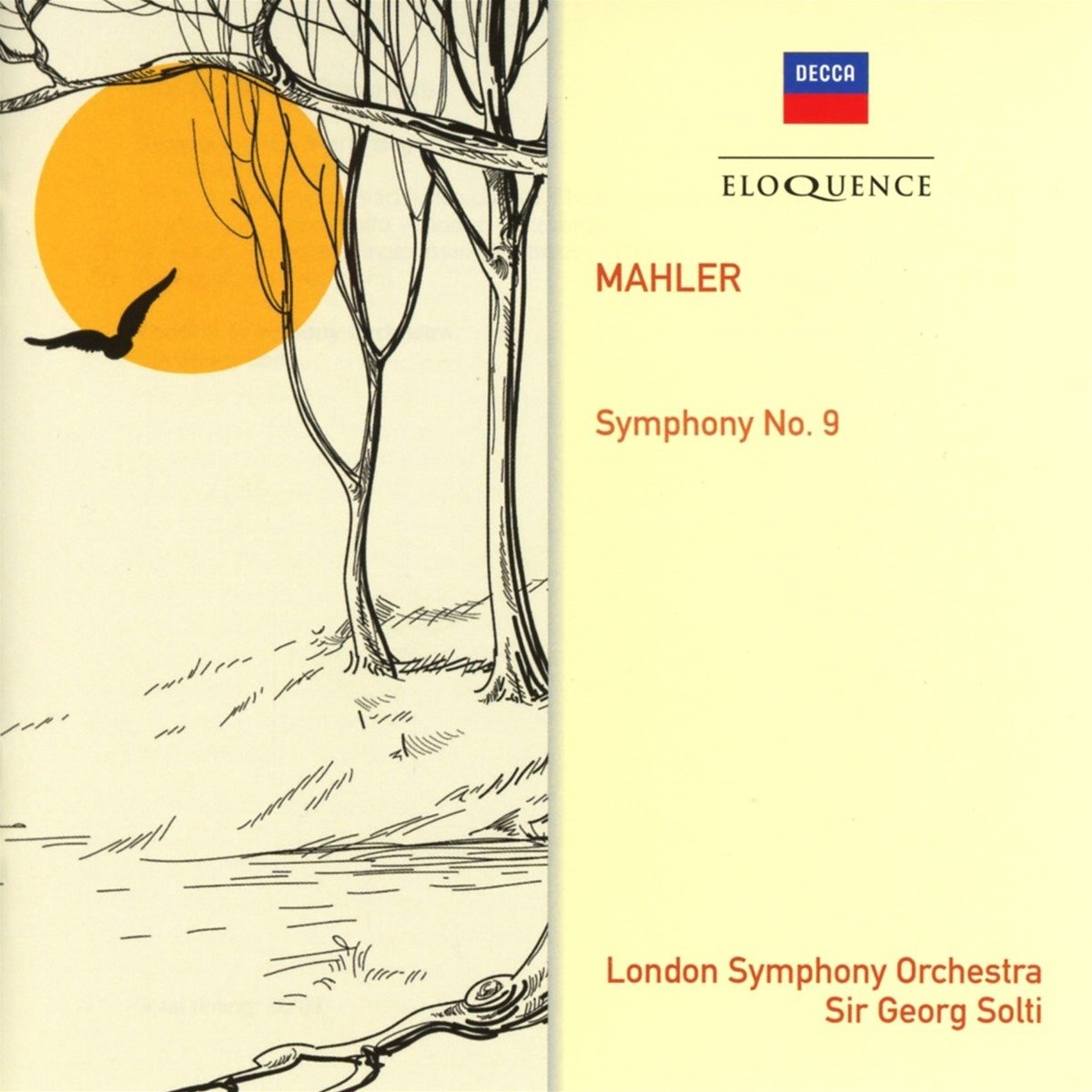 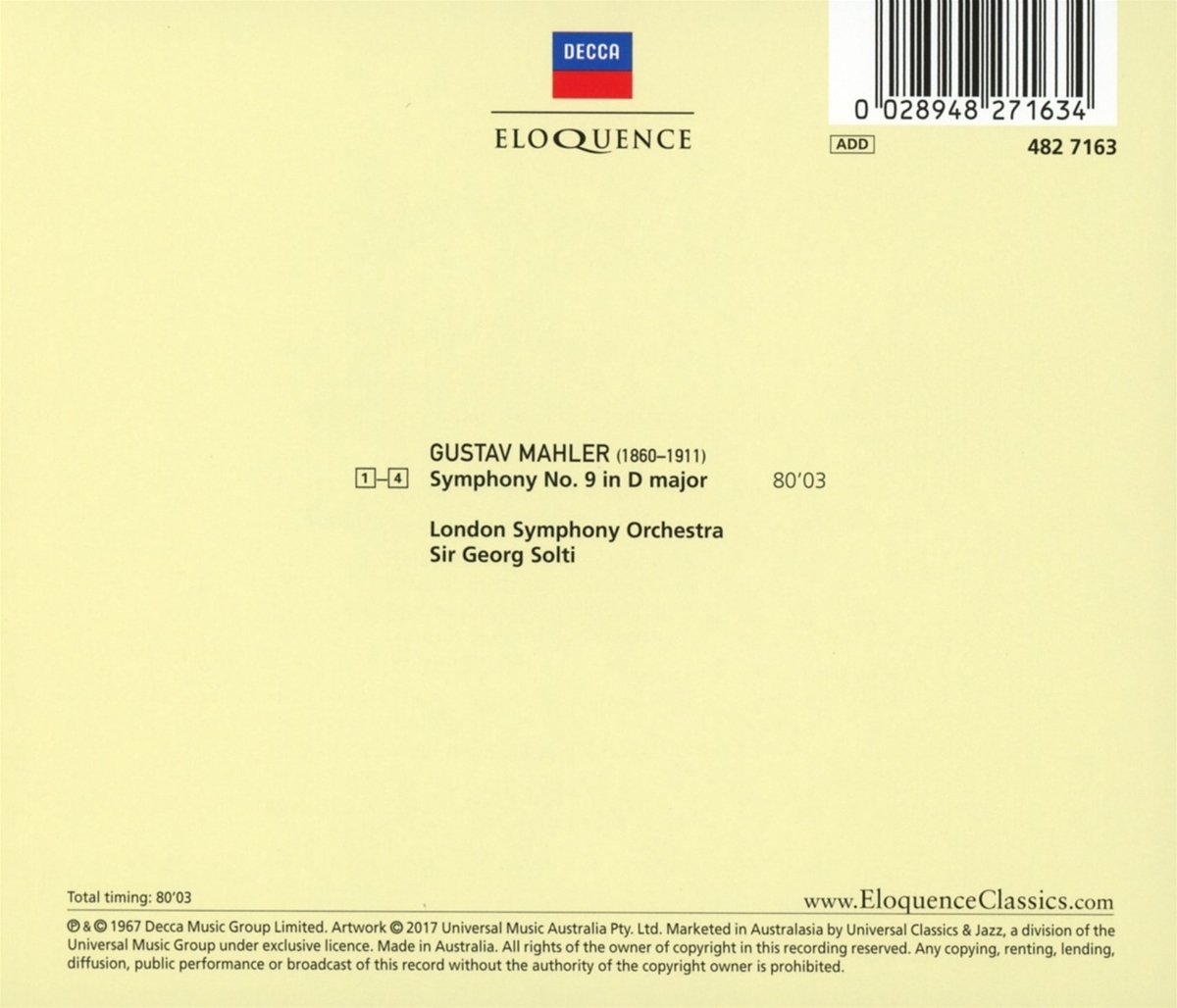 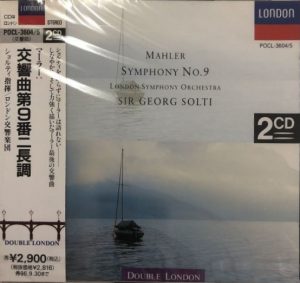 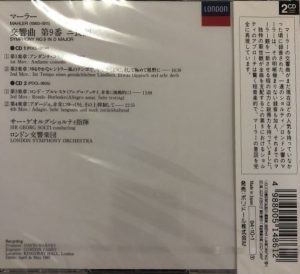 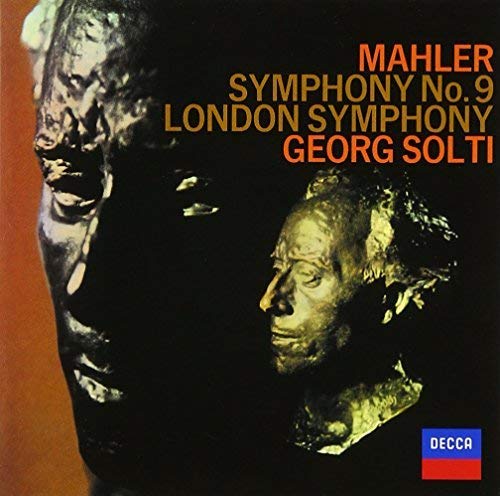 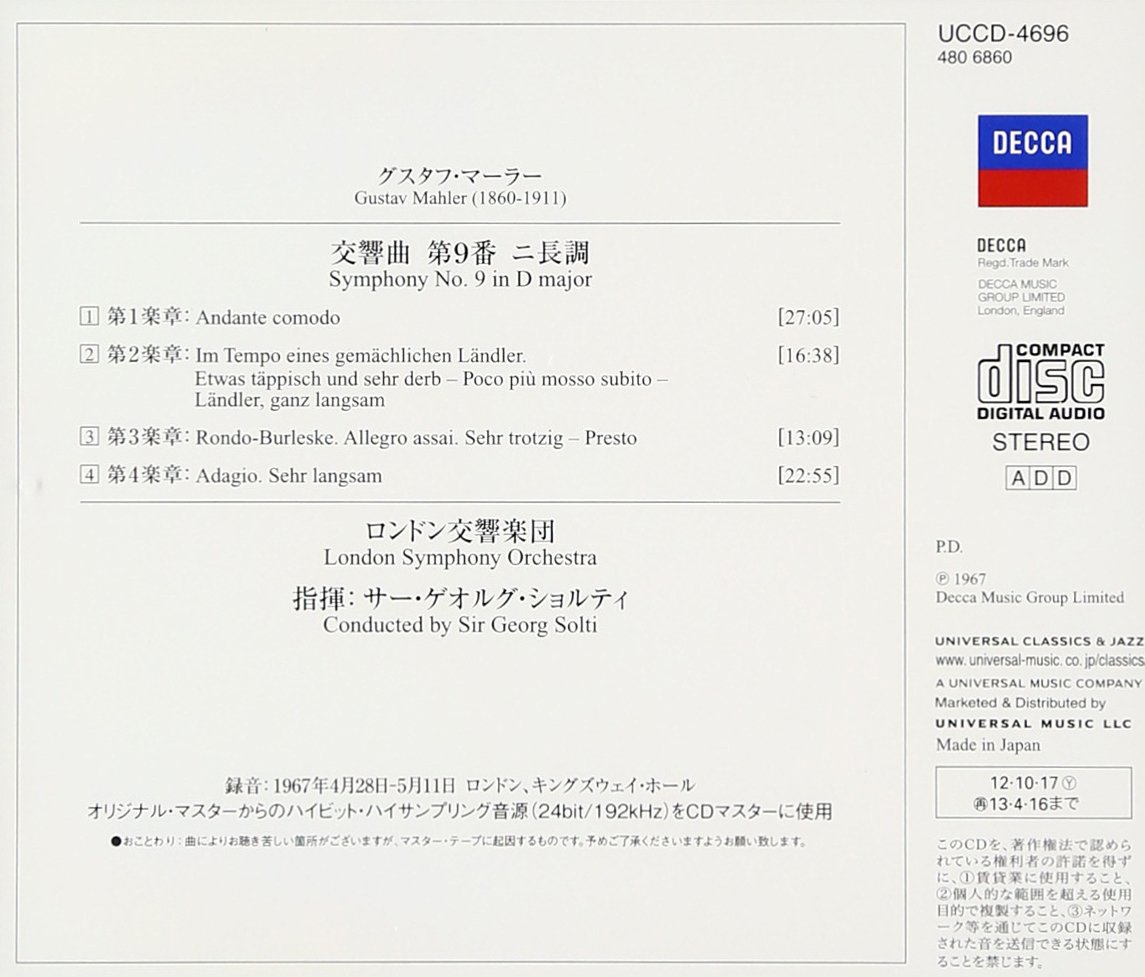 Unhesitantly the best version from the 1960s, and still today one of the best
Originally posted on Amazon.com, 5 December 2011, slightly emended for repost

While Horenstein’s 1952 recording for Vox had more or less had the field to itself in the mono LP era (link will open a new tab to my review), the stereo 1960s were a great decade for Mahler’s 9th, as far as recordings went. First came Walter’s 1961 stereo remake for Columbia (he had made the premiere recording, a live concert in 1938 with the Vienna Philharmonic): an “old man’s” version perhaps (Walter would pass away a year later), underplaying Mahler’s shifts of tempo and keeping everything at a steady allegro moderato, but an old man still full of punch. Then, in 1964, came a passionate version by Barbirolli with the Berlin Philharmonic somewhat let down by a lack of instrumental pungency, and an even more passionate one, but with a coarse Moscow Orchestra under Kirill Kondrashin on Melodiya. Bernstein‘s first go was in December 1965 (released only at the end of 1967), with a fine grasp of the symphony’s varieggated moods and tempi, hampered by what appeared on the first CD reissues as dulled sonics (which nobody seemed to mind about, or even notice, in the LP era), but this has recently been put right by the revelatory remastering and remixing from the original multi-track analog masters (the so-called “Carnegie” edition). A year later came another fine version from Czechoslovakia, conducted by Karel Ancerl, and 1967 saw the publication of the recordings of Klemperer (very much a maverick affair, massive but also massively ponderous) and this one by Solti with the London Symphony Orchestra (he re-recorded it in the early 1980s with his Chicago Symphony Orchestra, a version that I haven’t yet heard). Kubelik‘s DG recording was also made that same year, and despite some dulled sonic edges, it was, interpretively, a fine version. There were other versions in the late 1960s that didn’t make a great impact, like those of Neumann with the Gewandhaus Leipzig Orchestra (1967, never widely distributed in the West) or Abravanel‘s excellent if somewhat understated reading with the Utah Symphony (May 1969). Finally the 1960s were closed by Haitink, with the Concertgebouw, recorded in June 1969. The needs of the market were apparently satisfied for the next decade (or the labels thought so): the only versions of significance to be published in the 1970s were Giulini‘s DG recording in Chicago (1976), then Levine‘s with Philadelphia for RCA in 1979. Though published in 1980 Tennstedt was also recorded in 1979 and was generally warmly received by the critics, but here’s another one I haven’t yet heard.

Among all these, Solti’s was possibly the best version from that decade  – and it is still today, among those I’ve heard from the 1980s and after, one of the best.

First: the Decca sound. The edition I have is the second listed above, on the Eloquence budget series (not to be confused with the later reissue on the invaluable Australian Eloquence), from 2003 (the edition bears no copyright year, and my tentative dating is based on releases with adjacent barcodes), no liner notes, but I don’t think any remastering was done in either after the first CD reissue on Decca Ovation. As it is, everything is present, vivid and detailed, and cut at a high level, to the point of being almost agressive. The instruments, especially woodwinds and brass, have tremendous character and pungency – with Mahler, that isn’t just a seasoning or ornament, it is the essence. The passionate cello countermelodies in the first movement have great impact – only Bernstein here is comparable -, considerably enhancing those passages’ lyrical intensity. The price to pay for that presence and vividness is that it exposes a relatively plain string tone (no silky violins here), and dynamics that are sometimes too loud, as in the little “misterioso” wind serenade in the first movement at 21:31 (measure 376): it is anything but “leise” (soft), as Mahler instructs. But still, compare that 1967 recording to the digital sonics afforded to the same orchestra under Valeri Gergiev 44 years later (on the LSO Live label, barcode 822231166825, published in 2011). Sure, in 2011, the strings are silky, the sonics are smooth and comfortable: a Rolls Royce. Solti is a Formula One Lotus (I’ve checked: it was the leading team in 1967, with world champion Jim Clark) and the orchestra has so much more presence and punch [post script from 23 March 2017: thanks to Theplanets in the comments for putting me to shame here and exposing my glaring mistake – I THOUGHT I had checked! So make it a Formula One Brabham with world champion Denny Hulme…].

It isn’t coincidental that I bring in Gergiev’s version, because, other than the shared orchestra four decades apart, remarkably, it is to Solti’s that Gergiev’s shaping of the different tempos in the first movement comes closest. Solti’s molding of the opening violin phrases, though not lacking in feeling, may not have the warmth of Walter, the tenderness of Giulini, or the aching lyricism of Bernstein in his live concert in Berlin in 1979 (DG), and likewise upon the phrases’ return at 8:48 (measure 148 Tempo I) and 19:54 “Wie von Anfang”/as at the beginning: still, nobody beats the warmth of Solti’s horn and cello countermelodies. But thereafter, his handling of the various moods and atmospheres, static or dynamic, and, more important still, of the tempo changes and accelerations from static to dynamic, is remarkable and remarkably balanced, neither downplaying them (like Walter, Klemperer or Giulini) nor exaggerating them (like Barbirolli and Kondrashin). It is a version of great drama (just listen to how passionate Solti is as soon as the first stepping up of dynamics at 1:53, measure 27, and again at the “leidenschaftlich”/passionately passage at 11:52 measure 211), but Solti also develops great atmosphere in all the movement’s “funeral” moments, with their slow-motion, snarling brass fanfares and tolling timpani and harp (6:22 and return of tempo I, 14:41 “schattenhaft/shadowy”, or after the great “death” crash circa 18:05, measure 316 “gehalten”/held back – here, Gergiev strays from Solti and any tradition by adopting a puzzlingly swift tempo deprived of any sense of weight). Solti’s great crash at 18:04 (“mit höchster Gewalt”/with greatest violence) is suitably explosive although not as violent as Walter’s (nobody that I’ve heard is), but his ensuing timpani thwacks at 18:09 are as blasting as Ancerl’s. But the floating flute phrase (“schwebend”) in the movement’s coda, at 24:42 lacks a touch of interiority, and the final page (“again at tempo, but slower than at the beginning”) is tossed off a little too perfuctorily and without the feel and restraint of a true adagio.

In the Ländler Solti adopts and opening tempo’s closer to Horenstein’s or Walter’s easy going and clumsy gait than to Barbirolli’s, Bernstein’s or Ancerl’s cocky braggadocio, and remains closest to these two predecessors in the ensuing sections, but the Londoners play with immense vigor and pungency, which makes the music more grim than charming (as it is with Walter or Horenstein), and gives the impression that Solti is much faster than everybody else in the faster Tempo II (3:01), while actually he is not at all: like Horenstein he takes that section in 2:28, Walter in 2:27 and Bernstein and Barbirolli in 2:30. But the presence and potency of the Decca sound really makes the difference again. Just compare Solti’s sassy (“keck”) solo horn at 0:25 to Bernstein’s almost inaudible one at 0:21 (even in the recent remastering), or the 2nd violins’ entry at respectively 0:18 and 0:15 (“schwerfällig”/clumsy). Yeah, that’s how I want it to sound, with a touch of elemental crudeness, not (comparatively) tame like Bernstein. After that, grim, charming, cocky, I’m open to all moods (and it is always fascinating to hear the variety of character the same notes can yield) as long as I get the true essence: instrumental presence and character.

With all these intrepretive characteristics – Solti’s intensity and the Decca sound – you can anticipate a unique thrill in the Rondo-Burleske. And you get it. Solti’s tempo choices are very similar to those of Horenstein, Walter, Barbirolli or Bernstein, in between the mad rush of Leopold Ludwig on Everest (the first stereo recording, from 1959,  already with the London Symphony Orchestra, and a version much better than its non-existent to negative reputation, especially in that Rondo-Burleske) and the uniquely elephantine (but also characterful) gait of Klemperer. It is revealing to compare Solti and Bernstein here, because their basic tempo is so similar (in fact they both reach the passage notated “l’istesso tempo”/same tempo, measure 109, in 1:57; Solti is then imperceptibly more expansive and arrives at the lyrical B section in 6:08, to Bernstein’s 6:00). You don’t need to listen very far in: the beginning is entirely telling. Compared to the raging bite with which Solti’s trumpet and strings dive in, Bernstein sounds slack and mellow. I can’t start describing the myriad instrumental details that jump at your ears. In his review of Gergiev’s recording one reviewer talked about Bernstein’s sense of “the burlesque” here. I can relate to that and understand what he hears in Bernstein. But it is really a matter of what you believe really matters in the two cues given by Mahler at the top of the movement: “burleske” or “sehr trotzig” (very defiant). I think it is the latter. I don’t think Mahler’s “Burleske” was meant to be rollicking or jolly. It is a scathing ridicule of the good Viennese society – and even, who knows, an adumbration of the bloody maelstrom that was to hurl it into the abyss no more than a few years after the completion of the symphony (in that respect I find it very close to Ravel’s La Valse). So, to me, the more defiant, the better and the truer, and there is plenty of defiance in Solti’s version. But those listeners who find Mahler’s (or Solti’s) edges and angles too sharp and aggressive are likely to prefer Bernstein. But where Solti also definitely scores over Bernstein is in the central lyrical section, because he brings out the passage’s varied moods, from the intensely lyrical to the sardonic, without reverting to Bernstein’s constant (and unmarked) playing accordion with tempo. Still, Bernstein’s double acceleration in the movement’s coda remains incomparably thrilling.

With the versions of Giulini and even more Levine, as well as with Bernstein in his last recording with the Concertgebouw Amsterdam from 1986 (DG), we Mahlerite listeners came to the awareness that Mahler’s final movement contained more scope for the feel of a true, time-suspended “Adagio” than the 1960s seemed to know. Compared even to the versions of that decade, Solti’s approach is overall very flowing – although the movingly desolate passage with tolling harp, at 11:00 (measure 88, “immer sehr gehalten” / still very held back), is wonderfully held back. And if overall the movement seems to clock at exactly the same duration as Bernstein’s and Barbirolli’s (themselves also very flowing: both 22:55 to Solti’s 22:53 – compare with Levine’s 29:49 and Bernstein-Amsterdam’s 29:34), it is only because Solti takes the final page (“Adagissimo”) slower (3:25 to Barbirolli’s 2:53 and Bernstein’s 2:56). But again, thanks to the combination of Solti’s fire and Decca’s vivid sonics, I have not heard, before Bernstein’s 1979 Berlin concert, a version developing so much passionate intensity, even Barbirolli’s or Kondrashin’s, whose sonic impact simply can’t compare.

For those I’ve heard (which is most of them), all those versions mentioned in the first paragraph of this review from the 1960s and 1970s were significant and sometimes even great, yet for all their qualities none was without this or that flaw and shortcoming – idiosyncratic choices of tempo here and there, lack of instrumental pungency (or excess of it, with a strong Russian flavor, in the case of Kondrashin), patches of superficial expressivity, dulled sonics. Not that Solti’s version is entirely without any such flaws, but still, up until the end of the 1970s (and subject to Haitink’s 1969 recording, which is supposed to be outstanding, and maybe Tennstedt’s), I would have unhesitantly recommended this version as THE best (with Levine’s 1979 recording as a great, “alternative” view). There are too many reputed ones from the 1980s onwards that I haven’t yet heard (Tennstedt’s, Rattle’s two, Abbado’s second, Boulez’, Zander’s…) to be sure that this is still true; but I suspect it is.