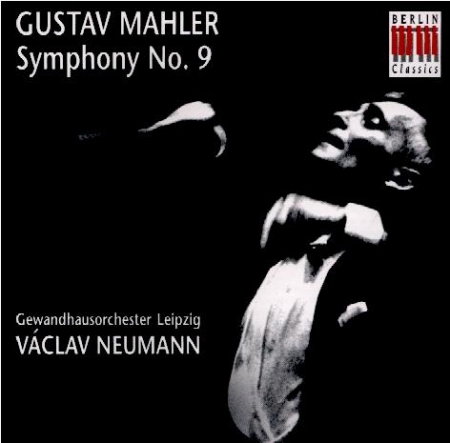 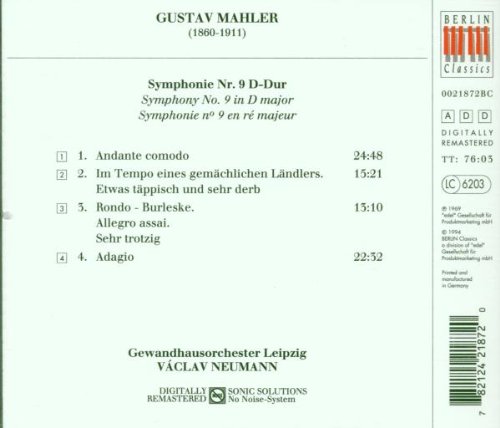 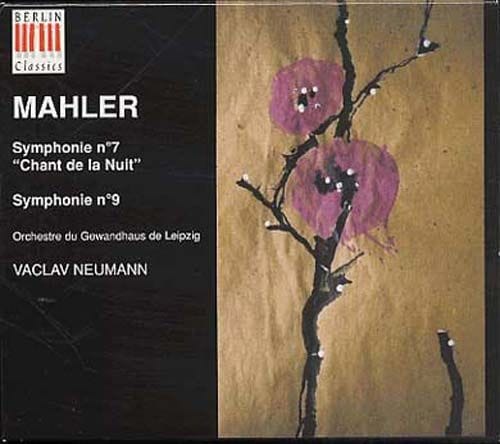 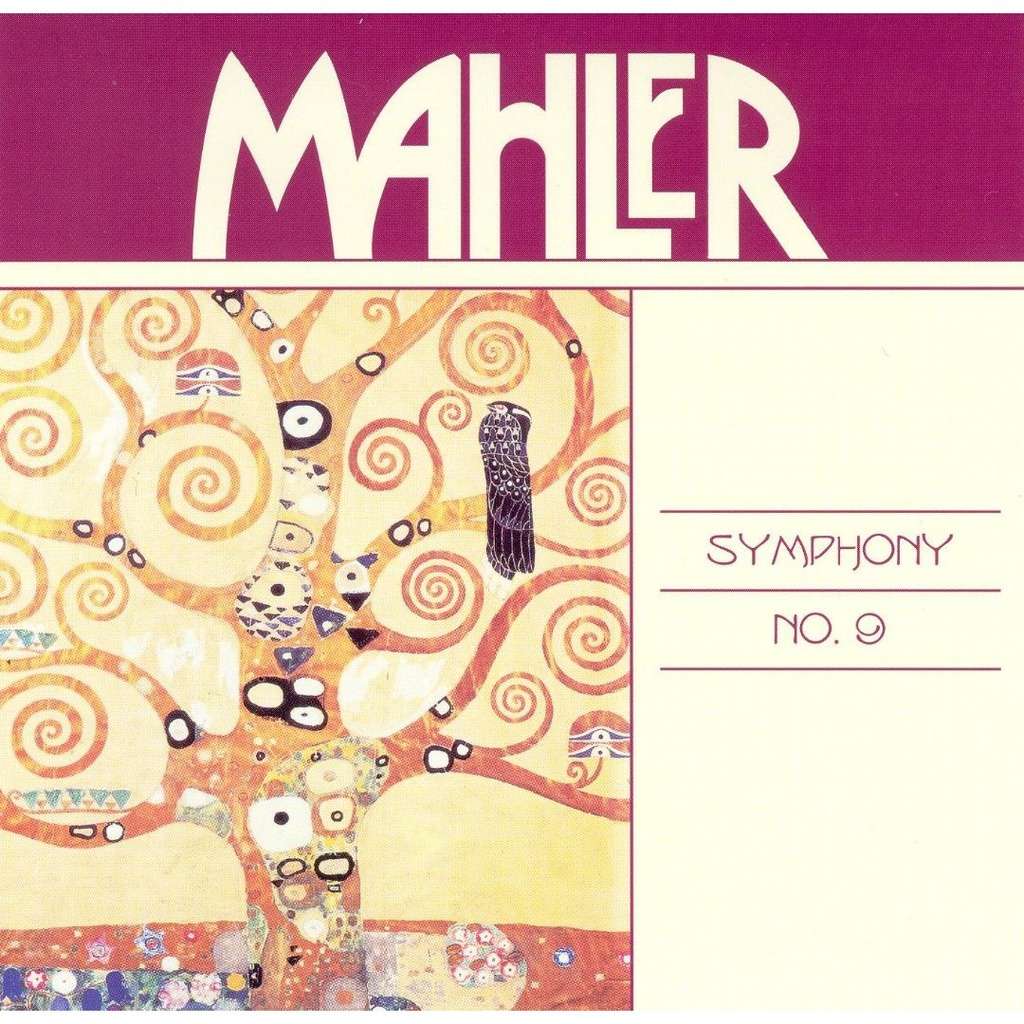 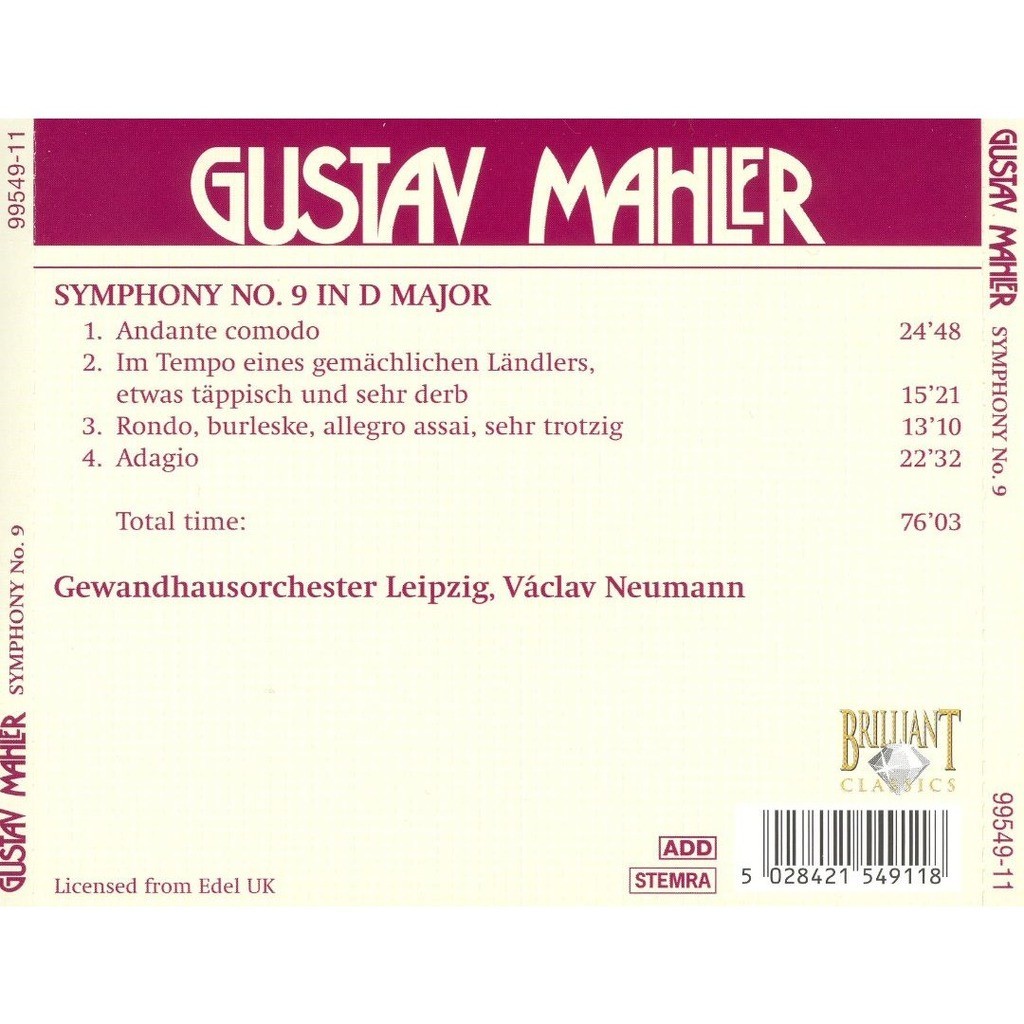 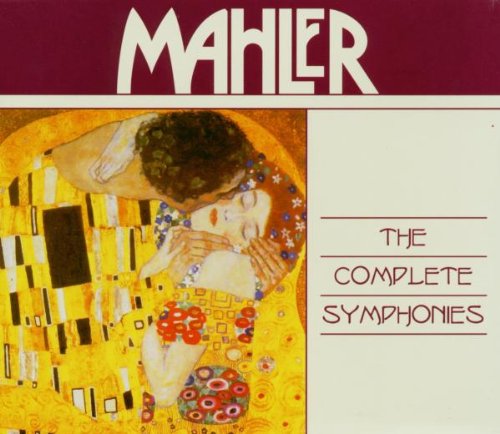 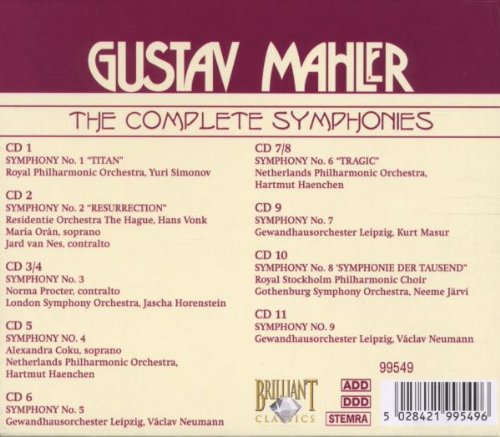 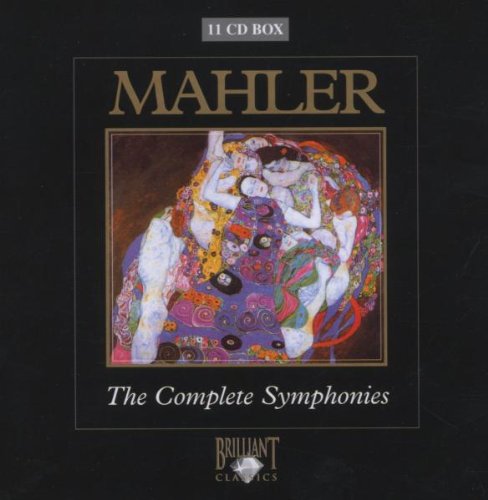 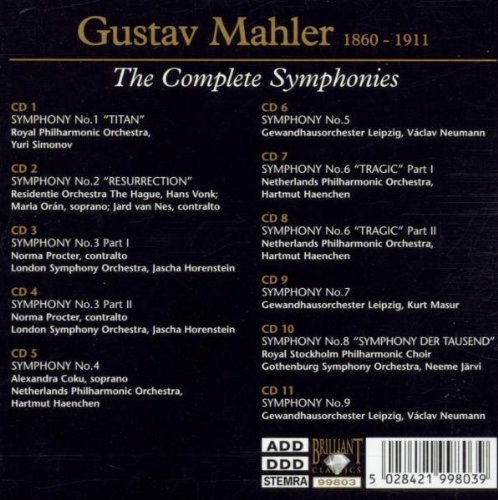 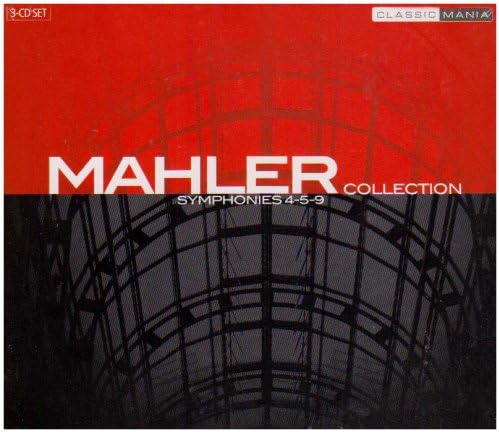 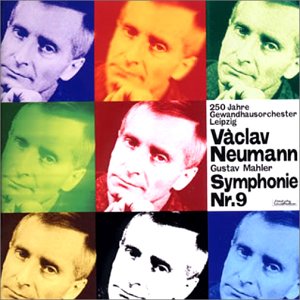 Marching On, Beating Time – Neumann’s Leipzig 9th fails on its first movement
7 May 2021 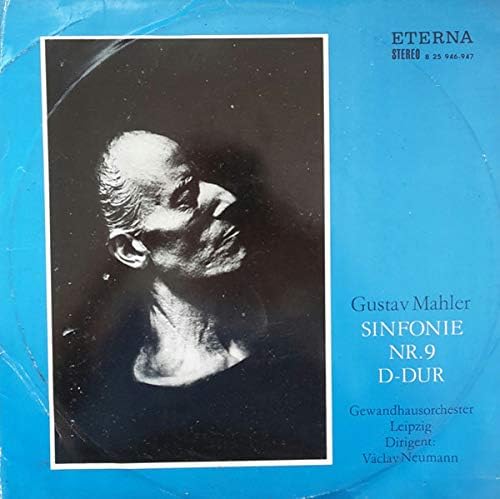 I was curious to hear Vaclav Neumann’s recording of Mahler’s 9th, his first, made with the Gewandhaus Leipzig Orchestra in 1967 for the East-German label Eterna (he twice re-recorded the symphony with the Czech Philharmonic Orchestra, on Supraphon in 1982 and Canyon Classics n 1995, the latter reissued on SACD by Exton). After the scarcity of the 1950s and mono era (Horenstein for Vox in 1952 and Paul Kletzki’s cut version from 1954 with the Israel Philharmonic for HMV – links will open new tab to my reviews) , the 1960s were a glorious decade for Mahler’s 9th, from Leopold Ludwig (first stereo rec. 1959 but published by Everest in 1960) to Haitink (Amsterdam Concertgebouw Orchestra, Philips, review pending) and Abravanel (Utah Symphony Orchestra, Vanguard) both in 1969, by way of Bruno Walter’s recording for Columbia (1961 – a version vastly different from his recording premiere made with the Vienna Philharmonic in 1938), Barbirolli with Berlin in 1964 (EMI), Bernstein in New York (rec. 1965, published 1967), Solti with the London Symphony Orchestra and Kubelik on DG with the Bavarian Radio Symphony Orchestra, not to forget Klemperer’s maverick but fascinating version (New Philharmonia Orchestra, EMI), all three recorded in 1967. And, for the amateurs of the “exotic”, there was Kondrashin on Melodiya (recorded 1964, distributed in the US in 1967 by Seraphim (SIB-6029) and Ancerl (Czech Philharmonic 1966, Supraphon, published in the US in 1967 by the Crossroads label). All these versions, even the elephantine (“hippopotamine” would suit it even better if the word existed) Klemperer, had something to offer.

Of all these versions, Neumann is the one that remained unknown east of the Iron Curtain. It was made during the Czech conductor’s tenure in Leipzig, and part of a series that included Nos. 5, 6, and 7; only 5 and 6 were distributed in the West, by Vanguard in the US (the 5th, in the early 1970s) and Philips (late 60s). They were clean, well recorded, played with great discipline, but interpretively  dry and bland. So, what about his 9th?

First, the sonics (I have the reissue on Brilliant Classics): they are great, letting you hear with a rare transparency the gossamer polyphony of the strings, and the gorgeous countermelodies of the cellos. The brass don’t jump at you as in Solti’s contemporary recording with the London Symphony Orchestra, and in some climaxes they are covered by the dense texture of strings, but their spatial placement is very natural. It is something I had already noted in many recordings of Eterna origin reissued by Berlin Classics (many from Dresden under Herbert Kegel): those East-German sound engineers more than held their candle to their Western counterparts. If only for that, this is a recording that constantly held my attention.

Interpretively is another matter, and Neumann’s first movement turns out to be in the same vein as his 5th-to-7th: cleanly played, but bland and uninvolved. Just listen to the Symphony’s opening bars and it’s all told: after the skeletal presentation of some of the themes that the movement will develop– the “broken heartbeat” on cellos, the tolling motive of harp, the syncopated motive first entoned by horns – comes  the achingly tender phrase uttered by second violins, first a bare descending tone, F sharp to E; remember how conductors like Horenstein, Walter, Bernstein, Giulini have achingly and lovingly shaped that motive, by applying an imperceptible rubato, a microscopic fermata by which the phrase becomes more than sound, a tenderly aching moan. Neumann? Just a descending second, played in strict time. I wouldn’t want to draw conclusions from a single interval – Kondrashin also phrases that rather indifferently, but was ensues is far from indifferent – but in the case of  Neuman it announces what is to come: the conductor glides over smoothly and seems to have no other point of view than to beat time, march on and not linger. He doesn’t heed, or only minimally, Mahler’s numerous instructions to hold back (“Rit.” at 2:44, measure 46 or again at 5:22, measure 91, “Pesante” at 16:03 measure 303, three moments where the momentum gathers energy to launch into the climax next bar; “p ma molto espress.” at 3:26 measure 57; “gehalten / held back” at 16:53 measure 321). Under Neumann, the sections of funeral marching (first one starting at 6:11 measure 110, then “Schattenhaft / shadowy”, or “ghostly”, at 13:44, and again at 16:47 measure 319) give an impression of haste rather than time at a standstill; and while Mahler does indeed indicate not to drag the first one (“nicht schleppen”), when comes, a few bars later (130), his instruction “suddenly very measured and held-back”, Neumann hardly does anything of it and simply marches on. Again, at the end of the second, “shadowy” funeral march, when returns the tender theme played in dialogue by two solo violins and flute-clarinets at 14:32 (measure 269 – “very soft/tender – zart – but expressively standing out” is Mahler’s indication), Neumann marches on indifferently and without poetry. And when comes the ethereal ending of the movement, “schwebend” (floating), at 23:01 (measure 420), Neumann doubles the tempo – not the only one to do that, and I wonder if it has something to do with the ability of the flute players to maintain hold long notes at a very slow tempo. Whatever the reason, it gives the impression that Neumann is in a hurry to finish the movement.

With all that, you could have expected his Allegro moments, when Mahler’s pacing reaches its maximum (“fliessend / flowing” at 5:09, measure 86, “Allegro” at 5:50 measure 102) to be really unleashed, as they are with Barbirolli or Kondrashin, but not so; they may be brisk comparatively with others whose basic tempo is slower, but relatively to Neumann’s own proceedings, they feel somewhat reined in. Likewise, I could have imagined more “Wut” – fury – when comes the “Mit Wut” section at the end of the first funeral march (9:40, measure 174), leading to the first great crash (10:47). His second big collapse, the movement’s apex, at 16:34 (measure 314) is okay and would be fine – if it hadn’t been done with way more devastating power by others, starting with Bruno Walter in 1961; and the ensuing ff timpani blows (repeating the tolling theme first played by harp at the top of the movement), at 16:40, measure 317, are without force. You need to hear Ancerl or Solti here, to know what “devastating” means.

There is a place in my pantheon for versions that are passionately brisk, as those of Walter in 1938 with the Vienna Philharmonic, Kondrashin with the Moscou Symphony Orchestra or Barbirolli with Berlin, both in 1964. But Neumann here doesn’t sound passionately brisk, he sounds indifferent, and a failed first movement is pretty fatal to any recording of the 9th symphony.

The approach however works better in the two middle movements. In the Ländler, Neumann’s relatively flowing opening tempo may sound to some to lack “rustic” or “clumsy” character (“schwerfâllig” is Mahler’s indication)– especially if they were raised on the the unique bonhomie brought by Horenstein’s or Walter’s more held back pacing, to say nothing of Klemperer’s “Dance of the hippos” – but it is well within the norm and it allows Neumann, better than Walter or Horenstein, to observe Mahler’s tempo relationships in the movement. His Tempo II (2:38) is excitingly unleashed – so much so that he can’t unleash it more when the Tempo II section returns at 6:35 (measure 261) and Mahler instructs to play it “but somewhat faster than the first time”, then “flowing”, then “still more lively”. It is exciting nonetheless, and Neumann does find the resources to whip up the orchestra to even more frenzy on the second return of the Tempo II section (starting at at 10:51, measure 423), at Mahler’s markings to do so (11:50, “noch etwas frischer – still somewhat more animated”, followed by  “progressively somewhat rushing, but not overwrought / allmählig etwas eilend, doch nicht überhetzt”). But he applies the brakes before Mahler’s indication, at 12:17 measure 515 with the surging trumpet motive, rather than at the return of Tempo I “subito” measure 523. In the other sections, Neumann commendably observe the myriad tempo changes and ritenutos inscribed by Mahler. Throughout, the woodwinds play with all the required, cocky character, but, as in Bernstein’s 1967 New York recording, the “keck” (insolent, cocky) horns at the beginning (0:23) are so covered by  the ff strings that they hardly register.

Neumann’s lack of flexibility in the first movement is more in situation in the Rondo-Burleske, since the movement basically sets one tempo that, until the more dreamy-then-passionate middle part, the conductor must stick to with great discipline, and the orchestra needs to be vigorous but always crisp (especially the basses) for Mahler’s “Bach counterpoint gone berserk” to fully make its impact. Neumann’s basic tempo isn’t madly rushed like Leopold Ludwig’s (and with the orchestra’s crispness and discipline, I regret that it isn’t), it is very moderato, in line with the approaches of Horenstein or Walter, but the orchestra is remarkably vigorous, crisp and disciplined, in a way emulated in those years only by Ancerl’s Czech Philharmonic, and the movement’s rambunctious defiance comes out particularly well. When comes the middle section, at 6:23, Neumann remains, like Walter in 1961, fairly strict in tempo (though not inflexible), but he doesn’t quite generate the same white-heat passionate intensity as Walter.

With all that, I was fearing that Neumann’s Finale would be as uninflected and unfelt as his first movement, but not so; it is in fact quite beautiful and passionate. My only objections would be that the “stets sehr gehalten” section starting with a harp ostinato at 12:38 (measure 89) is taken not at all at a “still very held back” tempo, but a very flowing one (like Barbirolli and Bernstein), which is okay (I find it particularly moving with Barbirolli) but not what Mahler wrote and possibly not as beautiful as a tempo really kept held back, and that the ff  re-attack of the strings at the end of that section, at 14:09 (measure 107), which should “erupt violently”, as Mahler instructs, is weak and without impact. Neumann’s coda is also very flowing rather than very slow as Mahler suggests (“Äusserst langsam” is the composer’s last tempo indication, “extremely slow” – and here, compare the  2:18 it takes Neumann to get through the last page, to Solti’s  3:25 or Abravanel’s 3:46… to say nothing of Bernstein’s 4:51 live in Berlin in 1979), but, hey, the music is so beautiful, any approach works here.

Still, though it has many fine things to offer in the last three movements, Neumann’s 9th fails on its first movement, which stays on the emotional surface of the music. Because of that, of all the studio versions from the “glorious sixties”, and even considering Klemperer’s “maverick” and outlandish representation, this is the one that even the completist Mahlerite can do without. I haven’t yet heard Neumann’s two subsequent recordings to see if things had significantly changed. At the time of writing, the Leipzig version is on YouTube, but these things go as they come.