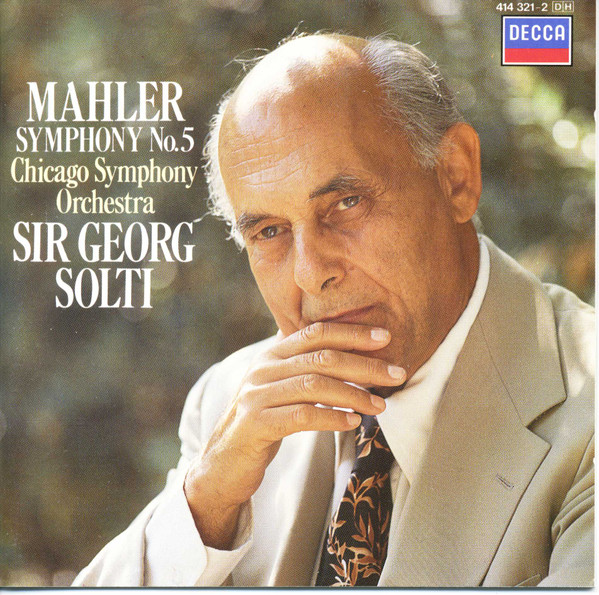 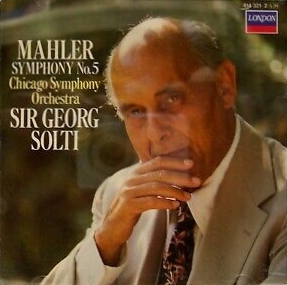 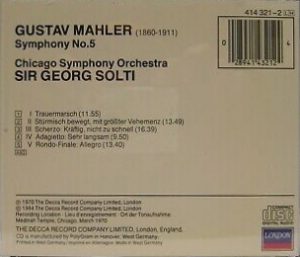 For the many reissues, see after the review.

Not a Mahler 5th for sissies. But within his interpretive options, Solti was, and remains, the best
Originally posted on Amazon.com, 26 December 2011

To make things slightly more simple than they are, the interpretations of Mahler’s symphonies (but I could extend that to the interpretation of ANY composition) fall within two broad categories: slow or fast. Now, don’t laugh, I am aware how naïve such apparently over-simplified categories may seem, but this is the synthesis of innumerable observations based on hours of comparative listening. Of course, things are more complex than that. “Fast” usually comes with associated interpretive parameters, like “biting” or “snappy”, and while “slow” always runs the risk of falling into “plodding”, “sluggish” or “ponderous”, it doesn’t when it comes with “mass” and “power”. And “slow” can also be “biting” (that’s one of my criteria for great, “slow” conductors) and “fast” can come with “mellow” and “lacking crispness and bite” (that’s one of my criteria for mediocre “fast” interpretations).

Also, an interpreter isn’t always consistent throughout. This movement can be fast and the next one slow (a good example would be Karajan’s famous 1963 Beethoven Eroica: three quarts of Toscanini and one quart of Furtwängler, in the funeral march). In music as sectional as Mahler’s, the conductor can be fast in one section of one movement and slow in the next one; he can take the fast passage slowly and the slow passage fast – and the way conductors shape the opening movement of the 5th provides good illustrations, whether they favor strong contrast or a sense of organic unity.

And, of course, these categories are “ideal-types”. Some performers are neither “fast” nor “slow”, but somewhere in a snug “in between”.

Overall, no such subtleties are called for in relation to Solti’s Mahler’s 5th – his first recording, made in the studio in March 1970 – although in the finer details, they do apply. As you can expect, he is true to his cliché: fast, biting like a Pit Bull, explosive – a powerhouse. Not that the approach, in 1970, was anything new. In fact, as far as tempi are concerned, Solti follows here a tradition established by – as surprising as it may seem, given the huge difference of temperaments between both conductors – Bruno Walter in his premiere recording from 1947 on Columbia, and subsequently followed by Erich Leinsdorf (Boston Symphony Orchestra 1963, RCA) and Vaclav Neumann (with the Gewandhaus Leipzig Orchestra in 1966), and later by Maurice Abravanel (1974, Utah Symphony Orchestra, Vanguard) and Zubin Mehta (Los Angeles Philharmonic, 1976, Decca/London). Other approaches, other traditions were established by Bernstein in 1963 (New York Philharmonic, Columbia), and even more radically by Sir John Barbirolli in 1969 (New Philharmonia Orchestra, EMI). Although, with compositions as sectional as Mahler’s Symphonies, the overall timings don’t tell the complete story, still they do tell the beginning of a story:

But in that approach, Solti is the best (even compared to those who came after). It has to do, first, with Decca’s stupendous sonics. Those afforded by RCA to Leinsdorf were already great, but this goes a step further, and in fact I’m not sure this was ever bettered. I can’t start describing all the orchestral details, usually blurred, that jump at your ears, from the celli and double-basses to in the intricacies of the brass writing.

But the Decca sonics serve only to highlight what Solti does with the orchestra. In the first movement’s march, the conductor never lets you forget the military behind the funeral – and, with Mahler, the two are intimately intertwined. Solti’s march marches on powerfully, implacably, ferociously almost: there is nothing of the burdened plight of Bernstein’s remake in Vienna in 1987 0n DG, Solti’s march is grim, tight-jawed, dogged. He doesn’t slow down in the “gehaltener” passages (1:02 and 2:40), the change of mood comes from phrasing and dynamics, not pace. Likewise the final section, at 9:15, with its ghostly and nostalgic strings, has wonderful atmosphere. His fast section, at 4:52 (for comparison, Walter reached it at 4:44, Leinsdorf at 4:54, Bernstein at 5:09 and Barbirolli at 5:50), is not, in itself, particularly fast (Solti takes the section in 1:46, the same as Bernstein and Barbirolli, to be compared with Leinsdorf’s 1:32), but it explodes violently and gushes forth with great vehemence from trumpet and violins.

And that’s nothing compared to the second movement. “Mit grösster Vehemenz” indicates Mahler, and Solti whips his Chicagoans to plenty of that. The first celli and double-bass attack lacks crispness (Bernstein here is even worse, but Leinsdorf’s Bostonians are incomparable), but it is amply made up by the biting brass (see my pitbull comparison) and Solti’s frienzied speed. And he keeps that bite in the first phrases of the woodwinds that open the second, slow section at 1:13, letting the strings assume the passage’s lyricism and atmosphere, with its reminiscence of the first movement funeral march. And those recurring slow passages develop indeed great atmosphere, with huge tone (“grosser Ton” writes Mahler) and romantic sweep from the violins, and with Solti shaping with a great sense of drama but also of organic unfolding the imperceptible shifts of tempo between the moments of tension and repose. If Solti is more than a minute longer than Walter in that movement, it is because he is more spacious in these slow passages, and likewise in the Scherzo – that is where matters are more subtle than just uniformly “fast”.

Indeed the Scherzo is launched into with the urgency of Walter rather than the more leisurely and insouciant approach of Bernstein or, here, Leinsdorf, but, under Solti – vivid, close-up sonics helping -, it comes, unsurprisingly, with more powerful muscularity than Walter, exuding less a feeling of juvenile joy than, again, of an almost anxious exuberance. Not that it is devoid of charm: Solti’s waltzes (at 2:21, 6:26, 9:29) are unaffected and affectionate, and the conductor expertly stages, in the first and third, an acceleration into the giddiness of dance. And clearly it is an interpretation that spotlights the movement’s wild raging. Mahler marked in one of the autograph pages of the score of the 9th Symphony’s Rondo-Burleske “to my brothers in Apollo”, but this Scherzo (indeed a harbinger of the Rondo-Burleske), under Solti, is Dyonisos unleashed, developing scorching intensity in the climaxes – and making it a movement of many climaxes (circa 3:30 to 5:00, circa 9:45 to 10:30 , circa 11:45 to 14:15, the coda at 15:53).

At 9:51, Solti’s Adagietto strikes a middle ground between the “fast” approaches of Walter (7:42) and Leinsdorf (8:29), and slow one of Bernstein (11:00). It is beautiful, never exaggerated, the melody flows gently without giving the impression of being dragged on and milked, the Chicago strings play with a soft and tender tone and rise up to the passion of the more animated and passionate moments. The finale is back to Solti’s youthful exuberance verging onto cockiness. Significantly, the conductor doesn’t observe Mahler’s instruction to play the opening oboe and clarinet themes (at 0:18 and 0:29), respectively, “hesitantly” and “somewhat slower”, and he doesn’t relax his tempo on the charming little “grazioso” passage at 1:53, as if he wanted nothing to get in the way of sheer, exuberant joy and drive, even Mahler’s mock sentimentalism. Bernstein was already very fast here (13:43 to Walter’s – also brisk – 14:04), but Solti shaves off another few seconds from Bernstein, and leads it to a thrilling, hair-raising coda.

Certainly, because it plays up Mahler’s urgency and biting rage rather than (like Barbirolli and Bernstein in his 1987 remake did so well) its burdened plight, this is not a Mahler for all tastes. Within its own interpretive options it is certainly extreme, and will sound excessive to many listeners. It seems quite fitting that Solti’s recording came chronologically immediately after Barbirolli’s, because, both at an opposite pole, they were and remain among the most extreme interpretations of Mahler’s 5th – Barbirolli all deliberation and mass, Solti a powerhouse of unrelenting intensity. Somehow deliberation and mass must be easier to take than unrelenting intensity, because while Barbirolli’s recording seems universally admired, I see that a number of reviewers of Solti’s recording on Amazon.com pan this version, although many seem to do so less on account of the intepretation as because of the “garish, overly bright sonics”. I think they are great, and I love hearing all those biting instrumental details that go lost is so many other recordings, made before or after. But those who feel that “Solti’s tendency to relentlessly pressure the music forward instead of letting it breathe naturally significantly submerges its darker and more reflective qualities“, have simply let their hearing be ovewhelmed by those moments (admittedly numerous) of biting rage. Things are more subtle than that, and what makes Solti’s version a great one is also that, precisely, while the biting rage may seem overwhelming, it does NOT come at the expense of the music’s darker and more reflective qualities – witness, in the second and third movements, his more spacious pacing of the moments of repose than Walter’s. But, sure enough: this ain’t a Mahler 5th for sissies.

Reissues (Japanese releases listed only when audiophile editions – SMH-CD or SACD – not otherwise available in the West): 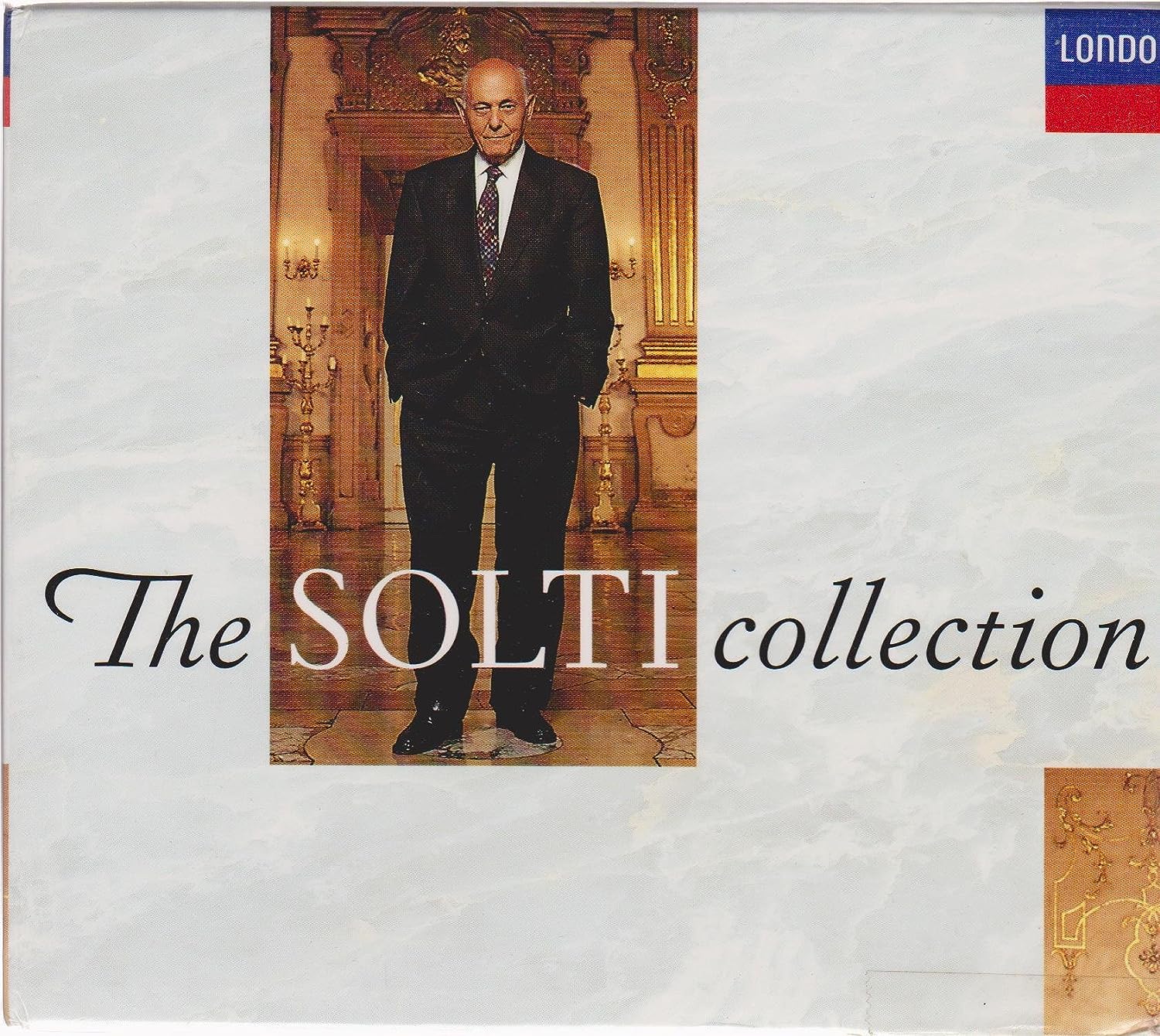 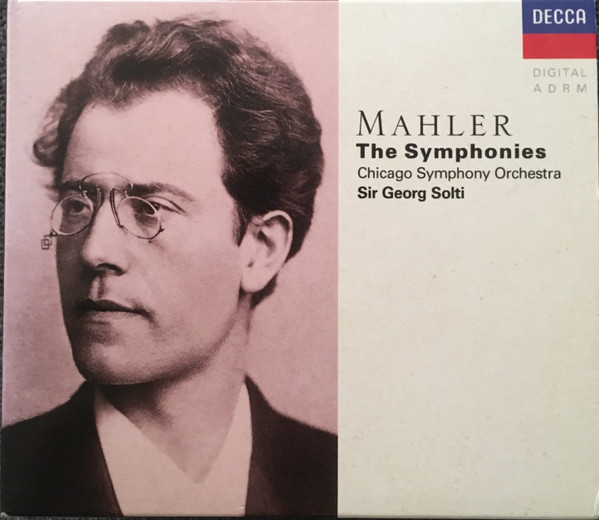 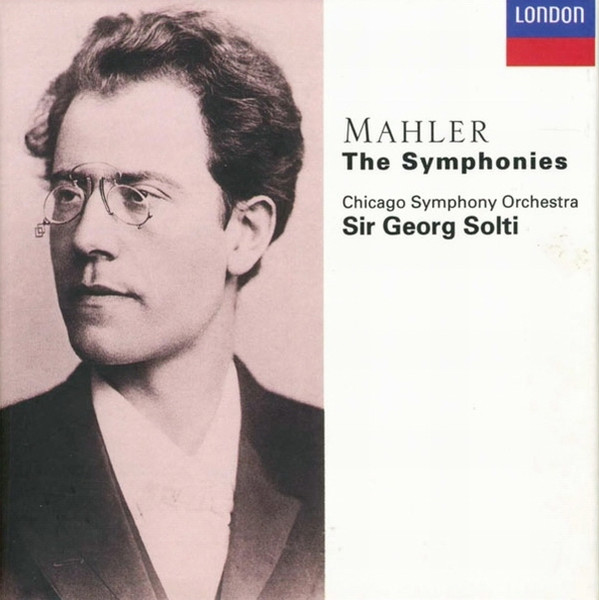 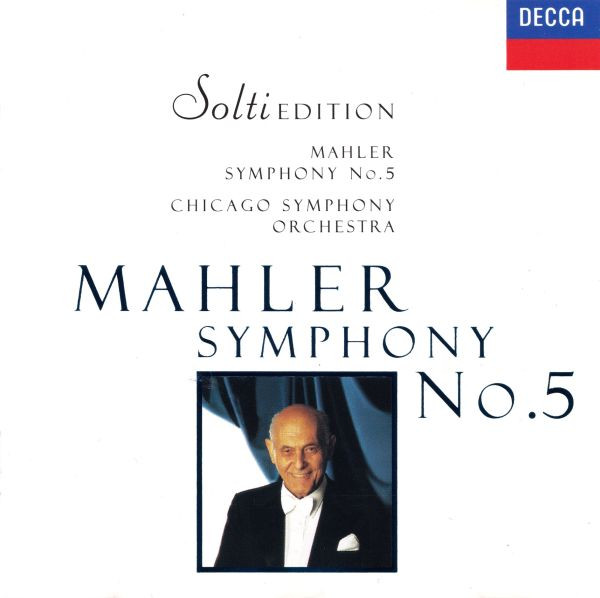 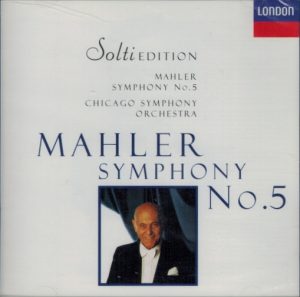 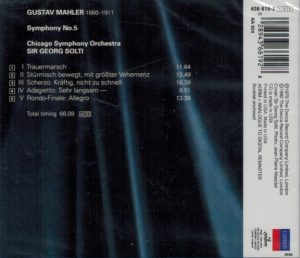 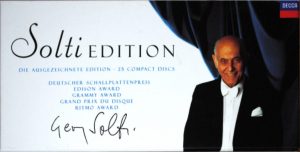 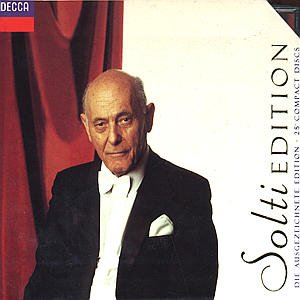 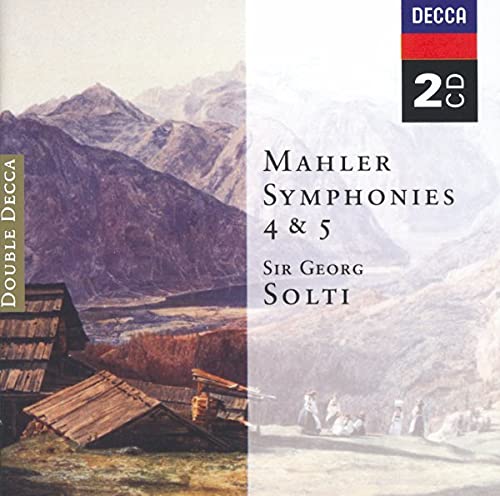 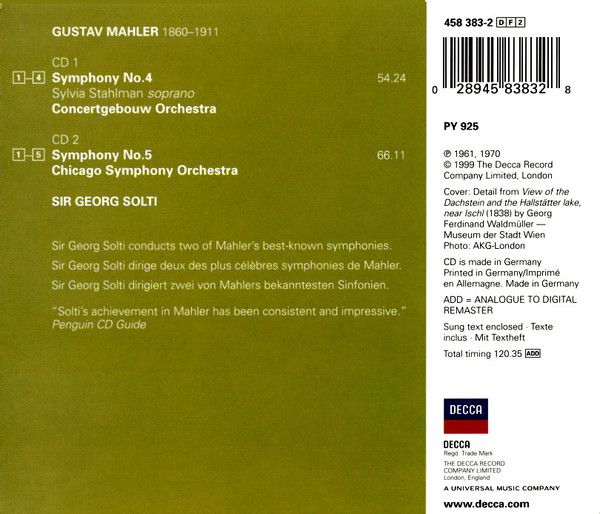 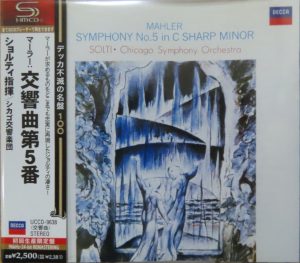 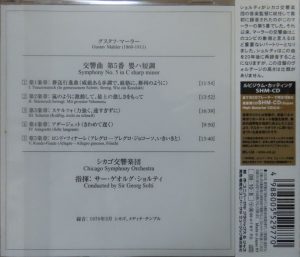 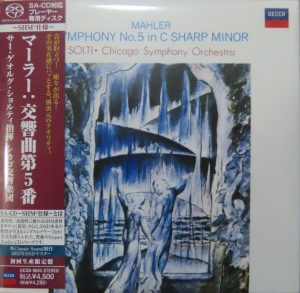 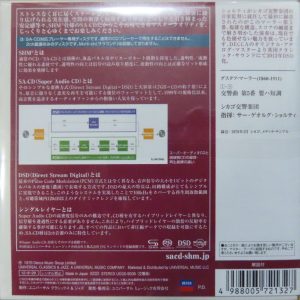 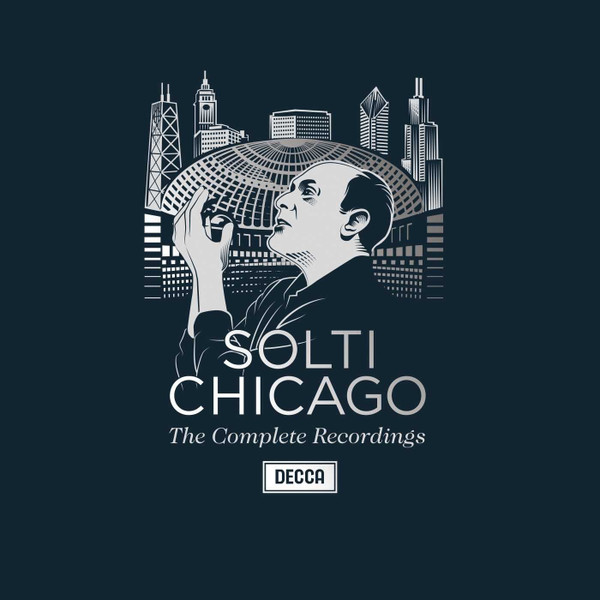 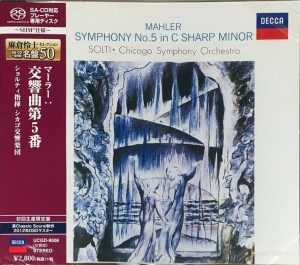 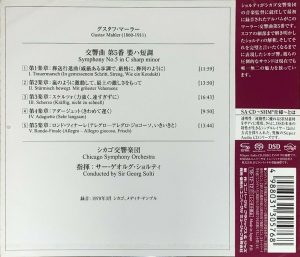 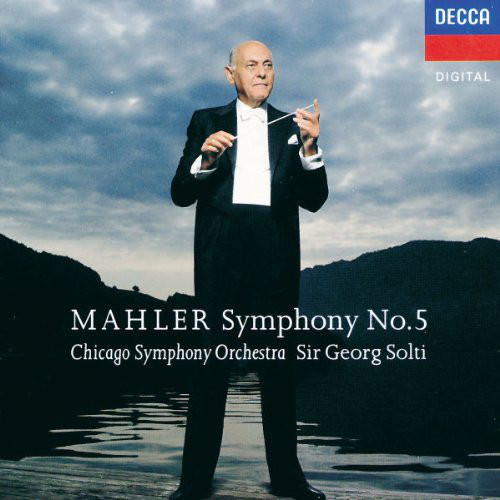 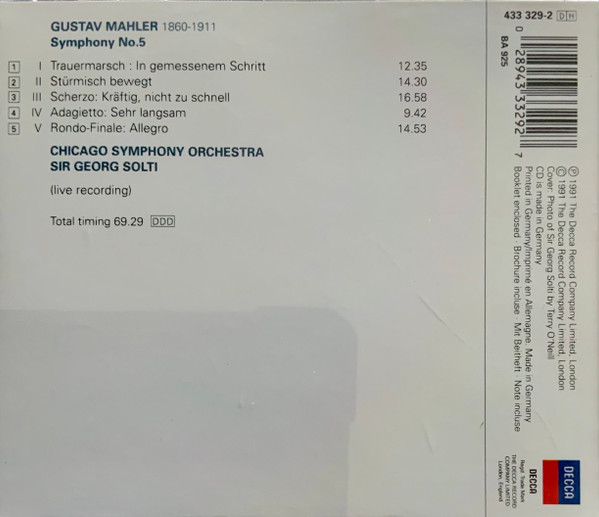