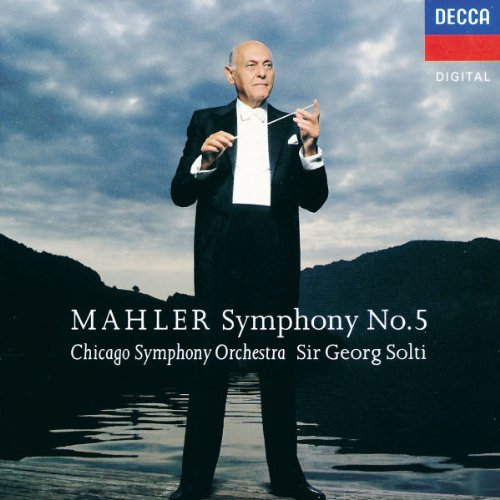 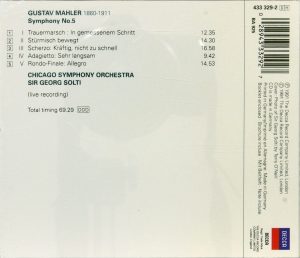 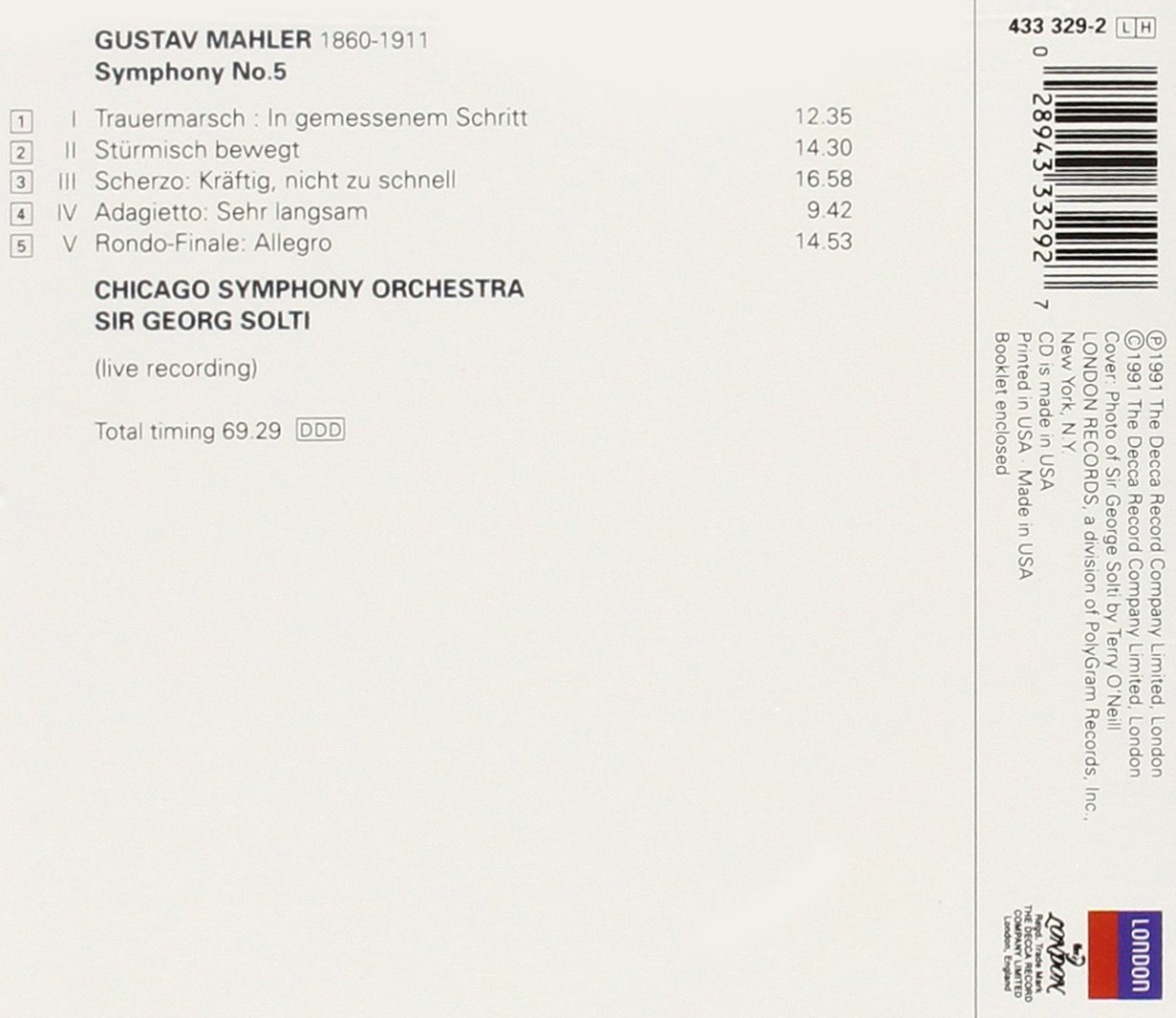 Solti’s earlier and studio recording of Mahler’s 5th, made in 1970 and often reissued (link will open new tab to my review), seems to attract two opposite reactions: there are those who love it, and those who reject it, the latter on account both of its “garish, overly bright sonics” and “Solti’s tendency to relentlessly pressure the music forward instead of letting it breathe naturally” (to quote two of the more lukewarm to negative reviews under the CD’s listing on Amazon.com). Those who dislike it tend to oppose it to this version, recorded live by the same performers, in Vienna, in November 1990. Being myself decidedly in the first camp (I find that, within its own interpretive option – brisk tempos, high voltage, maximum bite, which doesn’t preclude moments of great atmosphere and not just in the Adagietto -, it is the best, and I love the way the Decca sonics spotlight so many details from low strings and the intricacies of brass that are covered in most other versions), I was curious to hear the more recent version, and find out if the differences in interpretation or sonics justified the diffference of treatment.

Yes, interpretively, Solti has evolved, to an extent. His first movement funeral march now conveys more a sense of burdened plight, where in 1970 it marched on, grim, assertive, dogged, ferocious almost. Signficantly, Solti now reaches the fast section in 5:17 (incidentally, this is the same as Boulez in his 1996 recording with the Vienna Philharmonic for Deutsche Grammophon, and only slightly slower than Bernstein‘s first version, with the New York Philharmonic in 1963, on Columbia), to his previous 4:52, and invests the “gehaltener” passages (1:05 and 2:52) as well as the last, nostalgia-filled section at 9:53, with more restraint and a beautifully soft atmosphere. What he has maintained is his perfect sense of architecture and organic unfolding, and his fast section is not rushed in the manner of Scherchen (Westminster 1952) or Leinsdorf (Boston Symphony Orchestra 1963, RCA); in fact, despite his now slower opening section, he takes the fast one at exactly the same pace as before. It may come as a surprise that, overall, it is to Bernstein’s first recording that Solti now comes closest to, in overall timing (S 12:34, B 12:25) as well as section by section.

Sonically things have changed also, and the sonic pickup isn’t as close-up as in 1970. I can easily understand why those who consider the 1970 sonics to be aggressive and garish (and, to an extent, I agree, although I see it as a positive value) would prefer the remake: it affords more comfortable listening. The downside is that the impact of all those orchestral details that jumped at your ear in 1970 is now somewhat dulled – although this is perhaps perceptible only on comparison.

Therefore, while excellent in its own right, the second movement doesn’t have the bite and intensity of voltage as in 1970. Here too Solti has perceptibly mellowed down – his fast isn’t as high-strung and hectic (it now takes him 1:21 to reach the first slow section – which is the tempo of Karajan in 1973 or Bernstein’s 1986 remake in Vienna,  – to his 1:13 back then), his brass are more recessed and don’t approach the bite and impact they had in 1970; try the return of the fast section at 3:32 and compare with the previous version at 3:17: the perspective may be more realistic, but 1970 was Mike Tyson’s punches in your chin; 1990 is watching the match on TV, and that comment can be extended to all the similar passages. The notion of a “relentless” Solti even in 1970 was a far too simple one, and even then his slow sections developed great atmosphere and romantic sweep, and they still do in 1990, with even an added spaciousness and gentleness, although the string tone isn’t as full as it was in the 1970 pick-up (2:44, Mahler’s indications being “large bowing” and “G-string – big tone”), and there are now spots where, for sake of expressivity, Solti comes dangerously close to dragging (9:15, 9:58). Again, those who find Solti in 1970 too aggressive (and they certainly have cause to think so) are likely to prefer the new version. I personally think it is the essence of that movement to be aggressive.

Solti’s tempos in the Scherzo remain very similar to those of 1970 – urgent like Bruno Walter (in his pionneering recording with the New York Philarmonic in 1947 on Columbia) rather than leisurely like Bernstein -, but he is now more willing to relent, especially on the gracious little “nicht eilen” passages at 1:01 and 1:52. But again, while heard on his own Solti 1990 may sound convincing, on comparison with himself in 1970 you realize what a loss of impact the lesser sonic presence and Solti’s slightly mellowed approach has entailed, especially in the furious moments (“wild” is an indication that recurs throughout the movement, especially on the strings’ fff eighth-note runs); typical is the passage starting at 3:48 in 1990, which Solti in 1970 (at 3:38) took very slightly faster, but enough to give it an added intensity, and the first climax which it leads to at 5:05 almost misfires in 1990, and comes nowhere near the scorching intensity of 1970 – no more Mike Tyson, but a napalm bomb (4:50). The same comments apply at 9:48, with a chubby timpani stroke introducing recessed and almost tensionless strings and brass, vs 9:52 in 1970, with potent timpani thwack, frenzied strings, piercing brass. The strings’ greater presence in 1970 also gives more romantic sweep to the sweepingly romantic moments (try 1990’s 7:17 vs 1970’s 7:15). The coda at 16:08 is fine, but compared to the unleashed frenzy of 1970 (at 15:53), it sounds almost tame (all things being relative, of course). Again, those who don’t like being scorched by napalm, even sonically and metaphorically, will prefer the newer version.

Solti’s Adagietto remains extremely similar to the previous one – it’s now a hair slower (but perceptibly only by the clock really), and if in the end it is 10″ shorter it is because Solti presses the final measures more. Still, I find that the greater presence of both harp and strings in the 1970s version give it an added passionate warmth and glow. Also, in the live recording, audience is in general very quiet, but it is at the beginning of the Adagietto that you hear some coughs: not that they are very obtrusive, but this is precisely where you’d want NOT to hear them.

Again it is jawdropping how little Solti’s approach to the finale has changed in 20 years, all the way to the smallest details, the way for instance he does NOT observe Mahler’s indication to play the opening oboe and clarinet phrases respectively “hesitantly” and “somewhat slower”, or the way he does NOT relent at the charming “grazioso” passage at 1:50. As in 1970 he goes for sheer, exuberant joy and lets nothing, no trace of sentimentalism, even mocked as it can be with Mahler, come in between. During the first half, his tempi are even the carbon copy of those of 1970, never straying by more than 2 seconds. He now relaxes a little more starting at the section at 7:19 (where Mahler writes three times “Nicht eilen” in the course of circa two minutes), where in 1970 he kept pressing on. I thought there was a unique thrill in the way he made it back then, and it also had the advantage that when the pressing music returns, after the Luftpause measure 525 (now at 9:26, then at 9:12), with its build-up to the triumphant ending, Solti hadn’t lost the driving momentum, the enthusiasm, the exuberance. Not that it entirely lacks those qualities in 1990, but, comparatively, with the more distant sonics, it sounds again tamer.

I haven’t heard his 1997 Zürich concert, on Decca 475 9153, barcode 028947591535). I’ve concluded my review of Solti’s 1970 recording with the comment that it wasn’t a “Mahler for the sissies”, and I stand fast. But listeners with b… ulls’ ears are directed to it. To me the value of this remake is mainly in its first movement, where the more deliberate approach and mellowing of conception has something to add to Solti’s previous interpretation, rather than subtract.