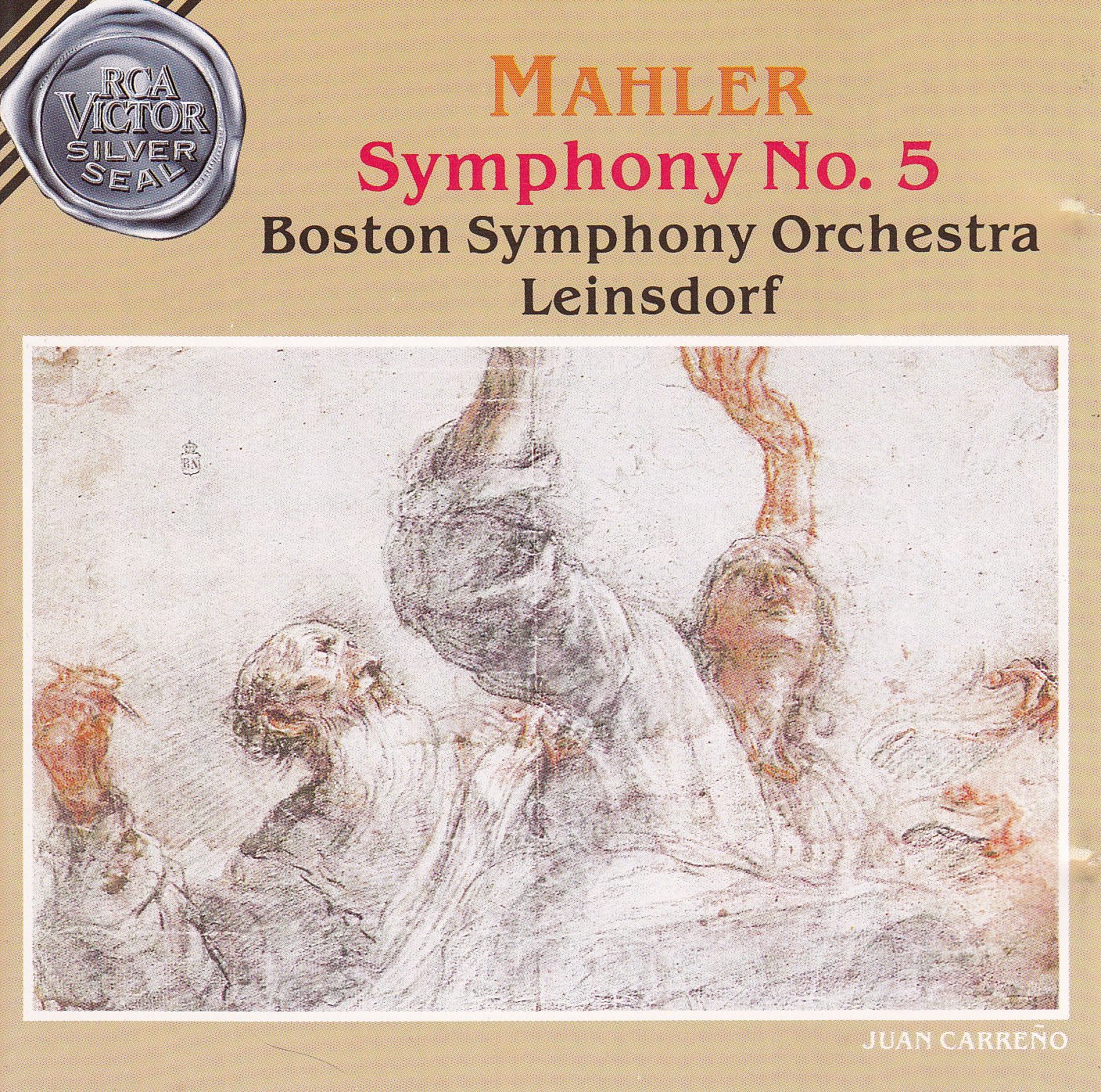 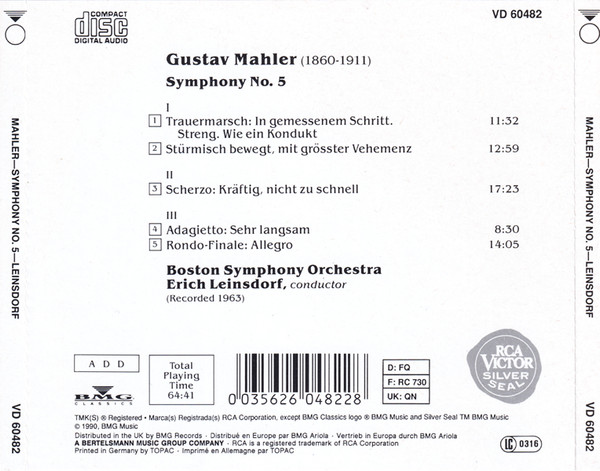 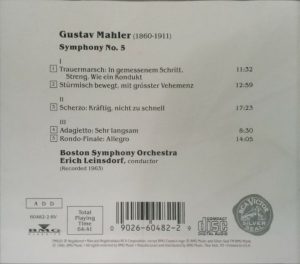 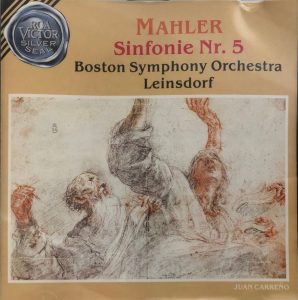 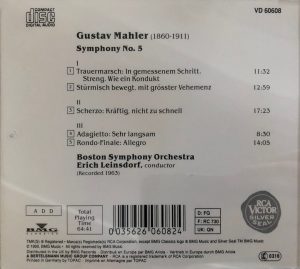 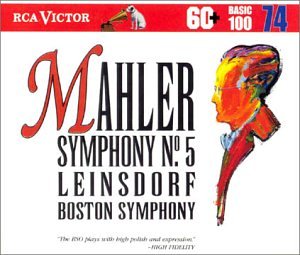 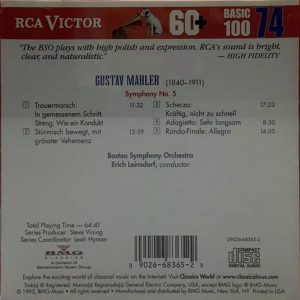 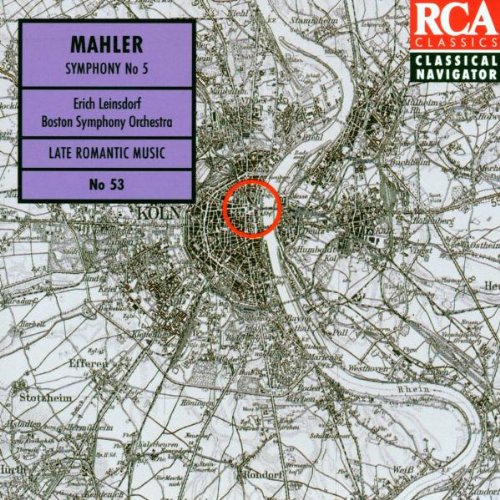 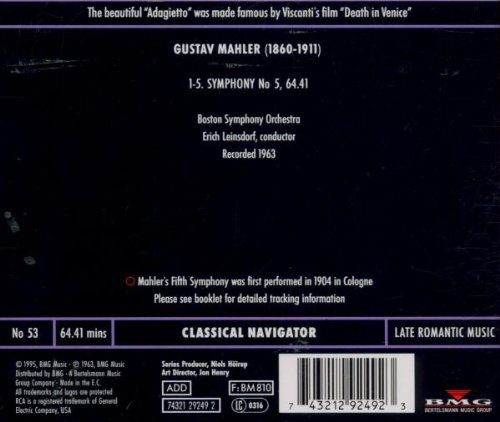 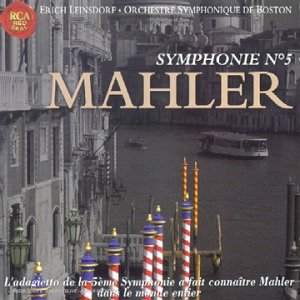 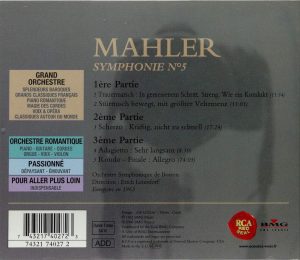 4/5 of Walter, 1/5 of Bernstein, in great stereo sound – still today a great version, within a given conception
Originally posted on Amazon.com, 19 December 2011

We’ve forgotten, these days when Peter Fülöp’s stupendous and indispensable Mahler discography lists, as of April 2010, 176 different versions of Mahler’s 5th Symphony (including DVDs), but these were times of Mahlerian scarcity. When Erich Leinsdorf recorded the 5th with the Boston Symphony Orchestra, on 17, 23 and 26 November 1963, it was only the fifth recording of the composition and the third in stereo. Bruno Walter had made the premiere recording in 1947, with the New York Philharmonic, on 78rmp, for Columbia (link will open new tab to my review), and Hermann Scherchen the first LP version and only one throughout the mono years, for Westminster, in 1952 . The first stereo recording was produced by Everest in 1958, with Rudolf Schwarz and the London Symphony Orchestra, a recording that doesn’t seem to have made much of a splash back then but whose CD reissue has apparently promoted it to a minor cult-status. Then came Bernstein’s epoch-making recording for Columbia Records with the New York Philharmonic in January 1963, only the third installment, after the 4th and 3rd, in his complete Columbia cycle, recorded between 1960 and 1967 (the Adagio of the 10th and a remake of the 2nd were added in the 1970s). As for Leinsdorf’s, as the newly appointed music director of the Boston Symphony Orchestra (succeeding Charles Munch in 1962), Mahler was evidently on his plans. His first recording with the orchestra, on September 30, 1962, had been Beethoven’s Eroica, followed by Bartok’s Concerto for Orchestra and Mahler’s First Symphony, and he’d go on to record two more, the 6th in 1965 and the 3rd in 1966 (information gathered in James H. North’s Discography of the BSO).

I always find it interesting to approach a recording chronologically, comparing it with the versions recorded before it rather than, with hindsight, to those that came after. Rather than assessing if an interpreter (still) has interesting things to say in view of everything that was said after, it is a matter of establishing what he had to say when he said it, viewing it in a historical perspective, as one in a string of successive recordings and interpreations: how did it fit in any given interpretive tradition if ever there was one at the time, or how did it stray from it, did it say things that had never been said before or did it just repeat those things, even if it expressed them better, sonically or interpretively? This is evidently much easier done with early recordings, when very little precedent exists. So either the interpreter is left alone with the score and has to invent his interpretation from scratch, or it is fairly easy to establish which recording the interpreter let himself be influenced by, because there are so few precedents to draw from.

Evidently Bruno Walter shaped his own view of Mahler’s 5th only from the score, and from his own, distant memories of how Mahler had conducted it; there were some points in which Scherchen’s choices were fairly close to Walter’s, but more often it was an entirely personal vision, sometimes verging on the eccentric (and it got much worse in Scherchen’s later live concerts). And Rudolf Schwarz’ interpretation on Everest was unlike those of his two predecessors.

But the striking feature of Leinsdorf’s 5th is how close it is to Bruno Walter’s recording. Just take a look at the timings. For reference and comparison, I’ll give the timings of Bernstein’s two versions, New York in 1963, and Vienna in 1987 on DG – both very different in conception from each other:

So, what jumps immediately to the eye is that, timing-wise, other than the Scherzo where Leinsdorf is in fact very close to the timing of the early Bernstein, Leinsdorf and Walter belong to the same family. Other than in the Scherzo, it is in the Adagietto that their respective timing may seem the furthest apart, but anybody who knows just a few things about the Adagietto knows that one in 8:29 belongs, like Walter’s, to the “fast” ones, those who approach the movement as Mahler conceived it, not some sort of “Death in Venice” autumnal meditation on the passing of things and anticipation of the finale of Mahler’s 9th Symphony, but a tender and passionate declaration of love to Alma.

Of course, with Mahler, overall timings don’t give the complete picture, because of the sectional or collage-like nature of his symphonic construction. Two versions in a slow-fast-slow construction (like the first movement of the 5th) can clock the same TT and be radically different, because one takes slow very fast and fast very slow and the other the opposite. In every section, slow and fast, of the first, second and last movements, Leinsdorf is very close to Walter’s timings, and where he differs he differs only marginally. He takes 13 seconds more than Walter in the 4:40 to 4:54 opening march and consequently lends it more of a feeling of burdened plight, where Walter marches on implacably. Where he diverges most is in the ensuing fast episode (“passionately” and “wild” are Mahler’s additional markings here), which he takes at a “normal” fast pace, where Walter kept it unexpectedly reined in: there’s a difference of 25 seconds in that section (Walter takes it in 1:47, Leinsdorf in 1:32). Scherchen had been much more extreme than Leinsdorf in stepping up the contrast of tempo here, with an opening section taken at the same tempo as Leinsdorf but a fast section that was a mad rush: 1:17, the fastest I’ve ever heard. The resulting impression was much more sectional, less organic. Among later versions, Karajan (1973, Deutsche Grammophon) and Levine (Philadelphia Orchestra 1977, RCA RD89570 barcode 0035628957023, RCD1-5453 barcode 07863545326) also played that contrast, but in an entirely opposite way: their fast was the same as Leisdorf’s (Karajan 1:36, Levine 1:35), but their opening slow was markedly slower (Karajan 5:26 in the first section, Levine 5:21 to Leinsdorf’s 4:54). Back to Leinsdorf and Walter: in the first slow section of the second movement, at 1:18 (Walter’s 1:19), Leinsdorf is 15 seconds more spacious, over a time span of 1:41 to 1:56 minutes. Consequently, and the great RCA sonics helping, he develops an added warmth in that section (the Boston cello desk is fab). Not only in overall timing but section by section, it is jaw-dropping how much Leinsdorf’s finale is a carbon copy from Walter’s.

It is also interesting to hear Leinsdorf’s slowing down rubato at 5:40 in the first movement. Mahler indicates nothing of the kind here, but it happens to be an interpretive tradition that goes back to Walter. Interestingly, Bernstein does exactly the same. For a “straight” and true-to-score approach to that passage, listen to Vaclav Neumann in Leipzig in 1965 or Mehta in LA in 1976 (Decca Ovation 417 730-2 bc 028941773029).

In the Scherzo, as mentioned, Leinsdorf’s choices of tempo are very similar to those of Bernstein in New York. The difference at the end is of 12 seconds (on a total of circa 17 mns and a half). Their opening tempo is the same, and in the slower section between measure 308 (“molto moderato”) and 490 (return to Tempo I), Leinsdorf a touch faster, but again the difference is not extremely significant: 17 seconds on a section of 4:05 to 4:22 duration. Tempo is not what distinguishes these versions between each other, not as much as between them and Walter (TT 15:15) or Bernstein in Vienna (18:38).

Naturally, there is more to an interpretation than its timings. There are RCA’s stupendous 1963 sonics as opposed to Walter’s 1947 78rmp recording, as good as it is for its vintage. For my money and ears, 1963 RCA analog sounds better than 2011 digital. There are all those myriad details that show Leinsdorf’s careful attention to the score and his great shaping of the orchestra. I can’t start describing them, but just listen to the great orchestral staccato on the triplets at 0:35 track 1. Or listen again to the warmth of the cello counter-melody from 1:17 to 1:50, or again to the very beginning of the second movement, the crispness of the cello and bass attack, where it is muddy and over-reverberant in so many other recordings (just try Bernstein, both in New York and in Vienna).

Sure, such details might give an impression of superficial brilliance but of lack of depth to those grown on the more brooding and ponderous approach of Bernstein, especially his Viennese remake. And this “brilliance-and-no-depth” stigmata it is something easily associated with Leinsdorf in some circles – although the same is NOT easily associated with Walter, despite the striking similarities of their interpretations. In terms of sheer drive, by Peter Fülöp’s count, astoundingly, at 61+ minutes running time, nobody beats Walter: his is the fastest of the 173 versions that comprised the discography as of April 2010 (excluding Scherchen’s three live recordings which are heavily cut).

Whether applied to Leinsdorf or Walter, the impression would be wrong, confusing drive, bite and rage for superficial brilliance, but I’d understand very well what a listener was hearing that led him to such a confusion. It is, I think, a matter of which filter you apply to your listening of the symphony, your expectations of how it should sound and what it should “mean”. If you think Mahler’s 5th should be burdened and brooding, that it should sound something like the plight of the Jewish people ever fleeing the persecutions and pogroms, then you’re likely to hear only superficial brilliance in Leinsdorf. If you hear in those funeral marches something like the ghosts of the fallen soldiers of all wars returning to compel the living to put an end to all wars (and we know, from his conversation with Freud, that Mahler had that twisted relation to military marches, which seems to have had little to do with the plight of the Jewish people), if you hear in the violent outbursts of the second movement a scathing ridicule of the good Viennese society in the manner of the Rondo-Burleske of the 9th… or if simply your listen just to the music with no pre-conception of what it is supposed to “mean”, then Leinsdorf, like Walter and even more, has great bite and power, even rage at times.

Is it to say that there are no small details which I think could have been better? Of course not. For instance, and to limit myself to the first movement, I feel that the Boston solo trumpet’s tone is slightly too brilliant for a “genuine” Mahler sound. Or Leinsdorf’s “klagend” (plaintive) climax at 10:14 in the first movement lacks a touch of despaired violence – but to be entirely honest, no one was entirely up to it until (among the versions I’ve heard) Karajan in 1973. But those are small details that have little importance in the overall picture. Also, in that same kind of approach, Solti in 1970 (Decca) is everywhere one touch better, more biting, more powerful, more vividly recorded, than Leinsdorf. And Metha in 1976 is pretty outstanding too. But it is not because “even better” eventually came about that Leinsdorf isn’t great in his own right – within that conception, of course, a conception which goes back to Walter and heralded a family of similar interpretations, including, for those I’ve heard, those of Leinsdorf, Solti and Mehta, but also of Neumann (see above) and Abravanel (1974).

For a very well-argued contrary view, go to the Gramophone’s online archive and read Deryck Cooke’s criticism in the January 1965 issue.