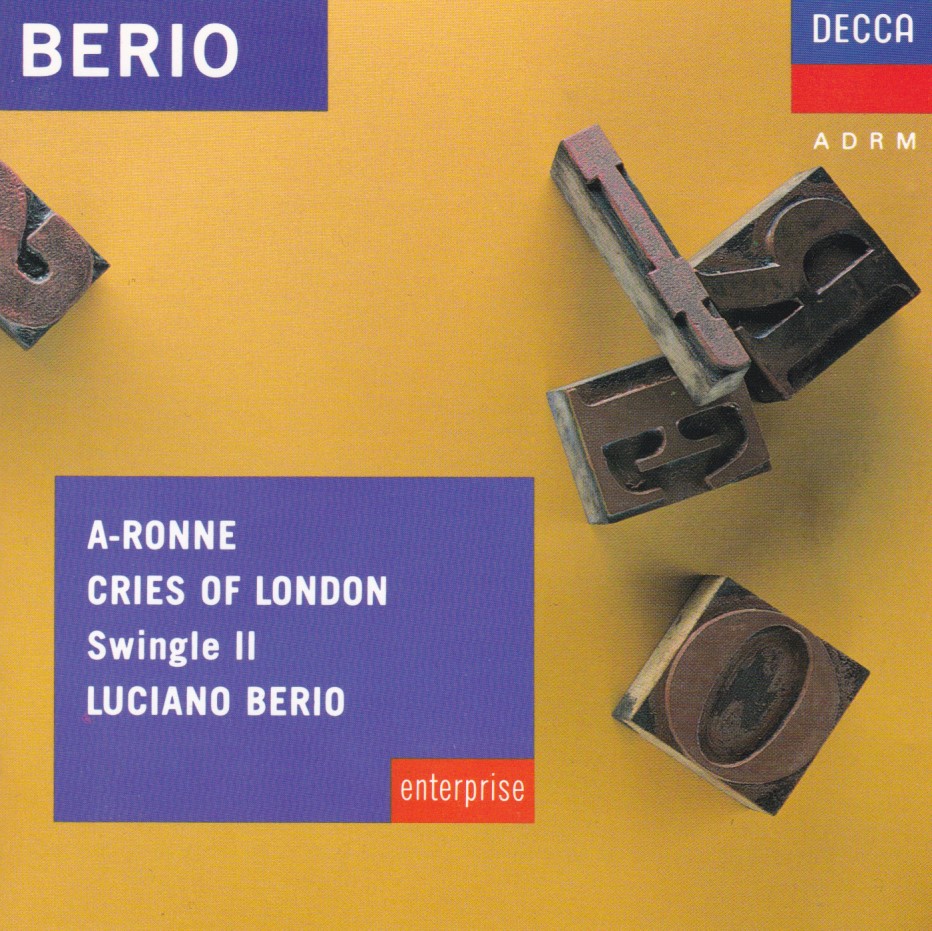 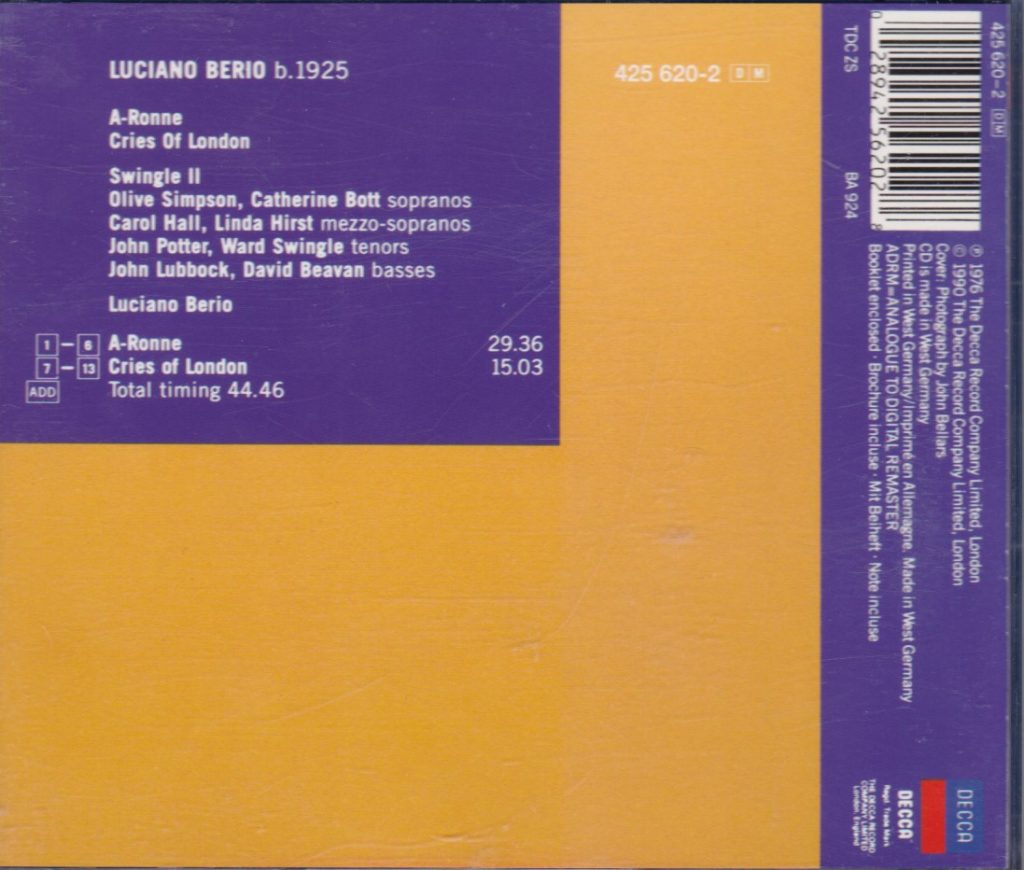 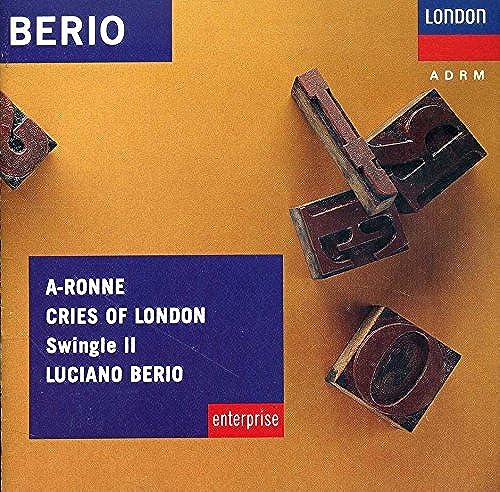 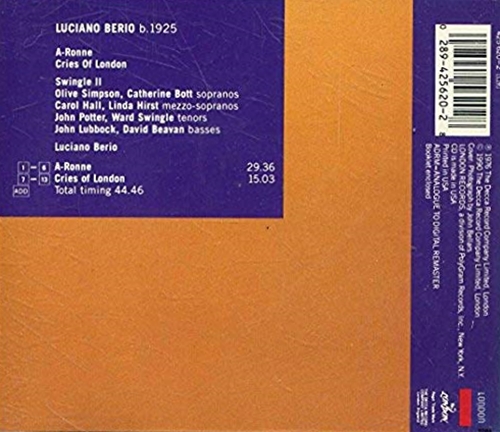 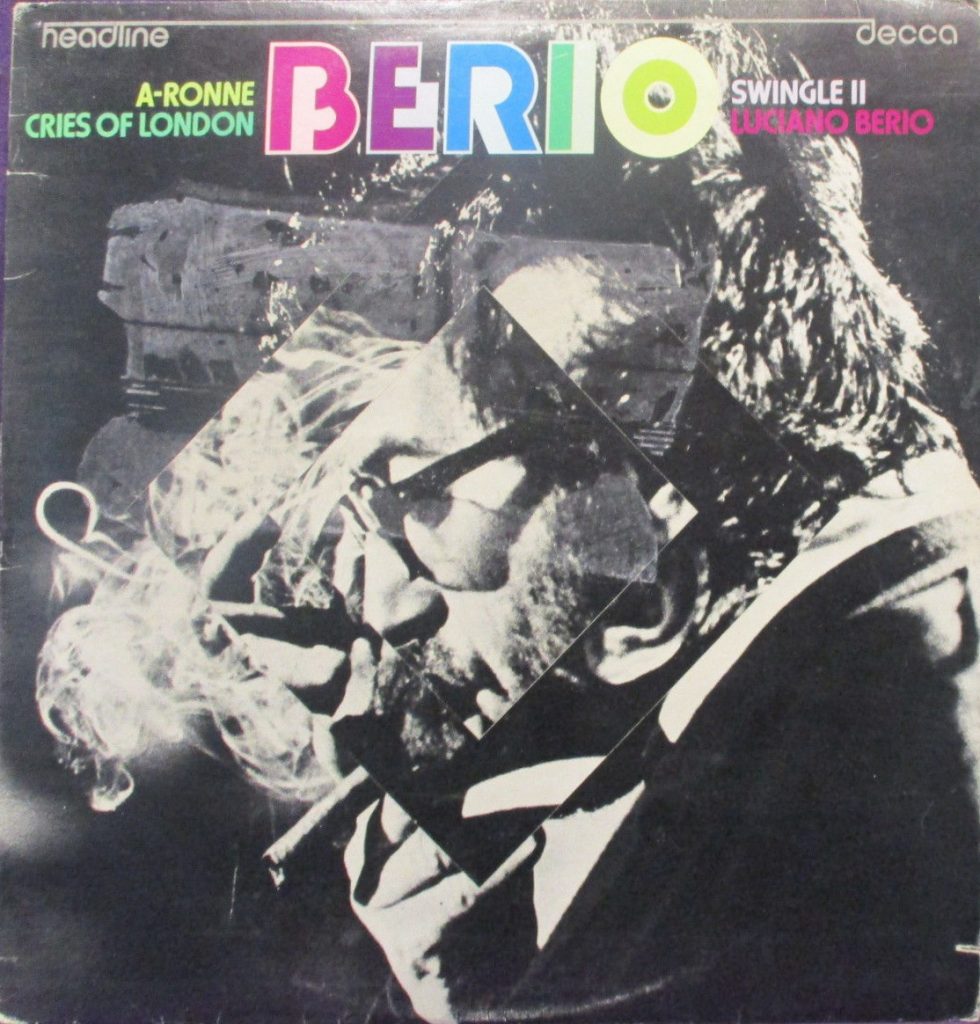 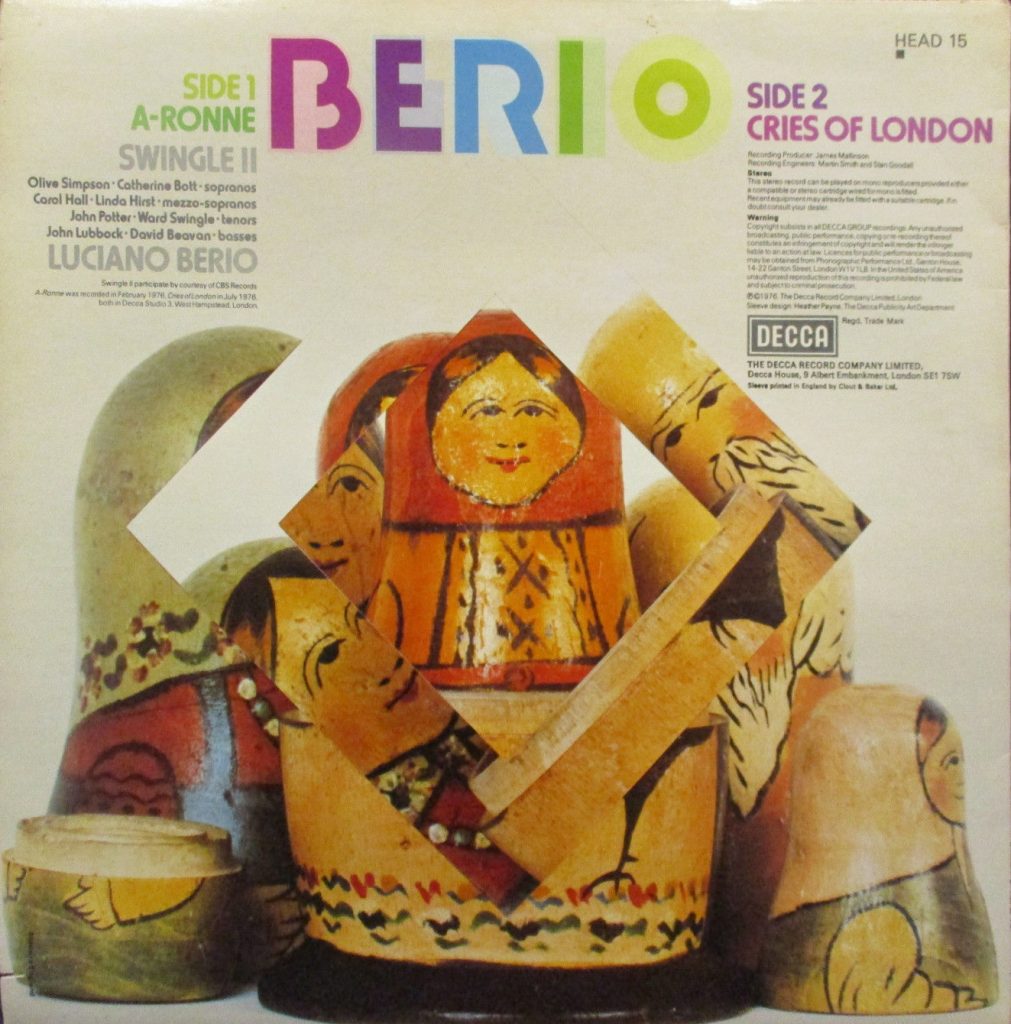 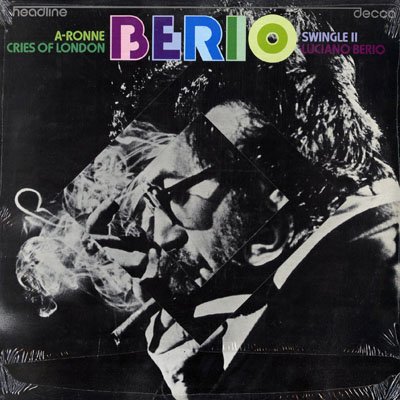 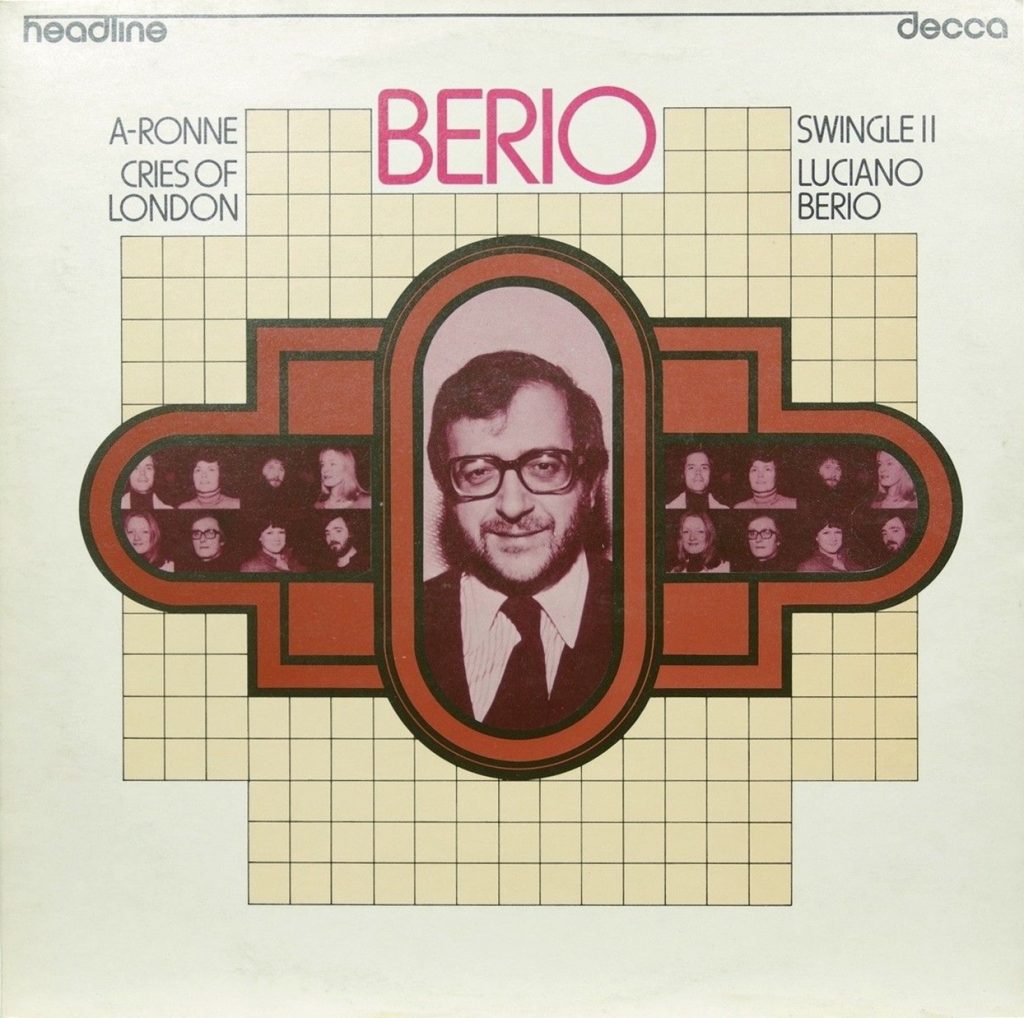 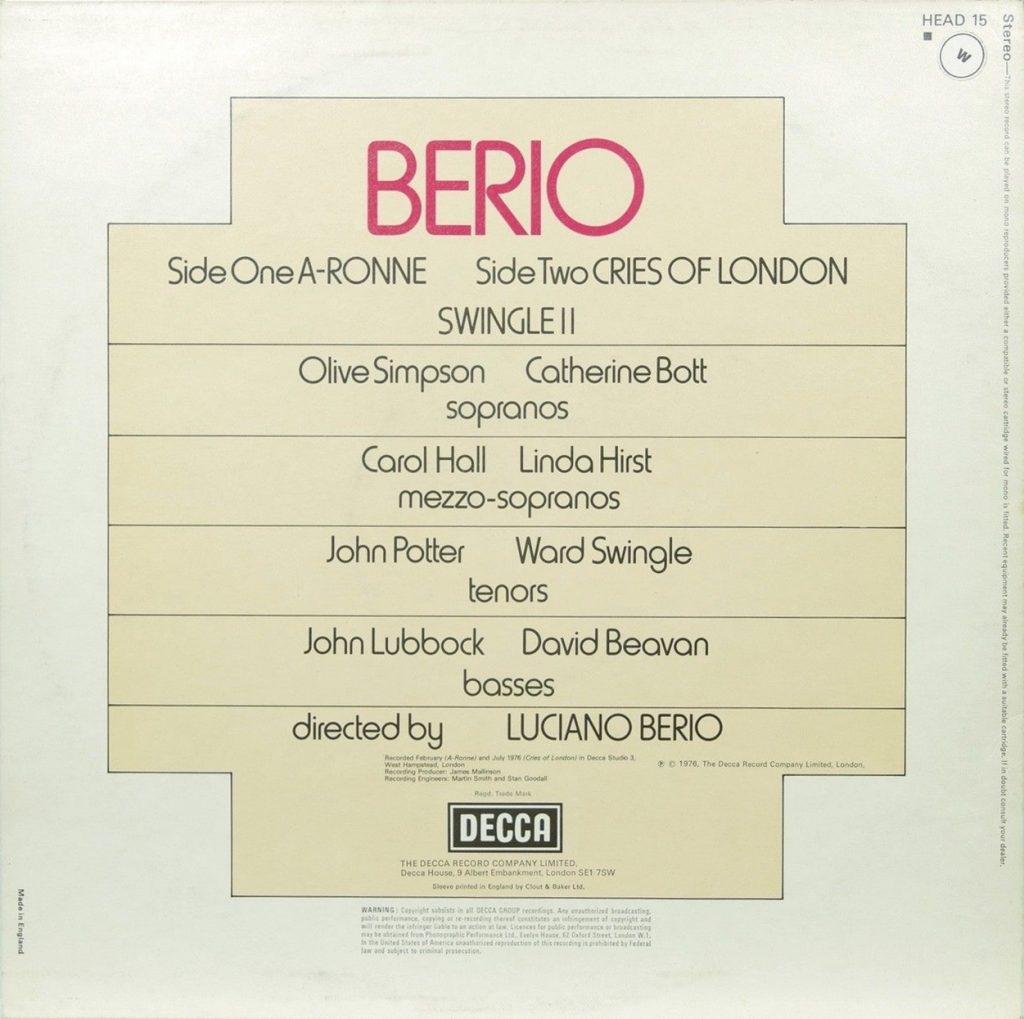 These are major works in contemporary vocal techniques, alongside the composer’s Sequenza for voice, Laborintus II and Sinfonia – the two latter also composed, if not “for”, at least with the Swingle Singers in mind (by 1975, when A-Ronne was witten, it was the London group, known as Swingle II, in which founder Ward Swingle was still a singer). As Laborintus II, A-Ronne is written on texts by the Italian poet Eduardo Sanguineti, so both he and The Swingle Singers were obviously inspirational to Berio.

A-Ronne is, in length (30 minutes) and exploratory ambition, the major work here, and what it is, Berio explains better than I could:

What Berio doesn’t say is that Sanguineti’s poem mixes languages (French, German, Italian, Latin, Greek) and draws correspondences between these notions of beginning, middle and end, with both the letters of the Hebrew alphabet (beginning = aleph and end = ette, conne, ronne) and the human (male) body: obviously an inspiration from the Bible, where (John 1:1) “in the beginning was the Word” (the line is quoted, mixing German, Latin and Greek) and where the human body is the microcosm of God’s creation. So for Sanguineti, the beginning is where the exterior comes in (the mouth), the end is where it exits (“anus”), and the middle is “le sexe” or “le phallus” (in French). But the end is also death, of course (and Sanguineti quotes the famous opening line from Dante’s Divine Comedy, nel mezzo del camino, “in the middle of my journey”.

Okay, so that’s the description, and perhaps the ambition. But what about the music? It’s wild, Berio and the Swingle Singers unfold the full array of contemporary vocal techniques and sounds a human mouth can produce, bellows and shouts, whispering, whistling, moaning, panting, burping, cheek-clicking, barfing, stuttering, muttering-psalmodizing – and that doesn’t exhaust the array of sounds that they produce. Oh, and at times, they also melodiously sing as well.

You can easily find it offensive, inept, “intellectual” (why has that become an insult?) and I certainly wouldn’t recommend that work and CD to people with no experience in contemporary music (or to confirm their worst prejudices and scare ‘em off). I find it both immensely fun, and fascinating, and deriving from the same inspiration that produced Laborintus II and Sinfonia. The Swingle Singers’ interpretation is authoritative and probably definitive – although two new recordings have come out since: the Neue Vocalsolisten Stuttgart under Peter Rundel have made a new recording of it on Wergo WER 6678-2, barcode 4010228667820 (recorded 2003, published 2005),  and Paul Hillier’s Theatre of Voices on Harmonia Mundi, SACD HMU 807527, barcode 093046752767 (2011): it is brave, laudable, and indispensable.

Cries of London is a shorter work (15’), and although the melodic and harmonic language is unmistakably contemporary (and at times virtuosic in its delivery, as on the 6th Cry, “money, penny come to me”), it is very melodious, more in the style of Berio’s Folksongs, a modern version of those English or French renaissance madrigals by Weelkes, Gibbons and Janequin. The Swingle’s imitation of possible accents from Renaissance London is immensely fun. That’s a piece that can easily be recommended to newcomers to contemporary music, if you want to trick them in believing that it’s entertaining and easy-listening.

As a bonus, here are two contemporary reviews, from High Fidelity (July 1979) and the French Harmonie (February 1977):

The other composer who has been as inventive and imaginative as Berio in contemporary vocal techniques is the Greek/French Georges Aperghis, especially in his Recitations. Total time is an LP-tailored 44:46, but there is more music, imagination and invention there than on many longer records.