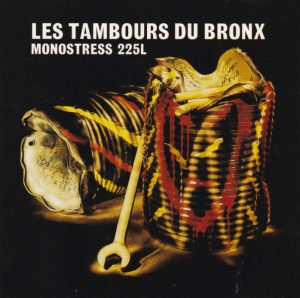 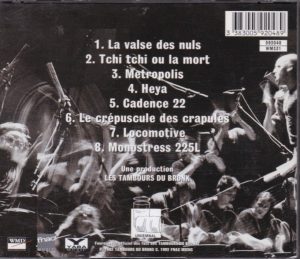 Remember the good ol’ days when we were young, maybe not entirely innocent, but hopeful? I vaguely remember, back then, attending a concert of Les Tambours du Bronx (or was it the saxophone ensemble “Urban Sax”? Hmmm….). In case you don’t know, Les Tambours du Bronx is a French “industrial” percussion ensemble created in 1987, playing – or rather, pounding – on what seems to be fuel drums (and they are drums after all, though not in French, where they would be “fûts” or “bidons”, as in “barrel”) and are, to be technically precise, “225 litre ‘Monostress’ drums, chosen for their resonance and flexibility”; for more info, see the Wikipedia entry (link will open a new tab), and the ensemble’s own website (they are still in existence today).

And that’s the explanation for the cryptic title of the CD, “Monostress 225L” – only their second recording, after “ça sonne pas beau un bidon?!?” (doesn’t a barrel sound good?), Eurobond Records JD EUR 760 303, from 1989 (the recording was reissued in 1990 by FNAC Music, 760303, barcode 3383007603038). I chanced on the CD as I was compiling a discography of the short-lived label FNAC Music – a label launched in the early 1990s by the famous French retailer, first specialized in pop, rock and dance music, but which branched out for a few years (circa 1993-1996) into classical, before, I guess, finding out that classical wasn’t profitable. The CD sold cheap, so for the sake of the good ol’ days, I bought it.

The music? Raw, pounding, simplistic rhythms – I should call it “pulse” rather than rhythm, “boom boom boom”, with some shouts and chanting – and the music is effective if you get a kick from loud pounding. But evidently all that was more effective live than as a purely audio experience – and as a purely sonic experience, you’ll get a far greater shot of adrenalin with  Steve Martland’s Babi Yar, and the constant acceleration of “Locomotive” (track 7) won’t replace in my affections Honegger’s Pacific 231 and its orchestral lushness .  TT would be suitable for a CD single – 27 minutes. But at the price, considering the nature of the music, and for the sake of the good ol’  days, I won’t complain.