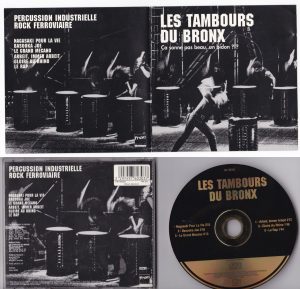 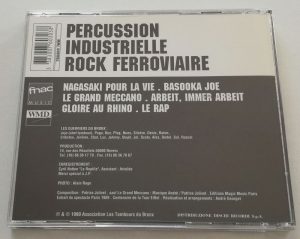 Somes days ago, as I was compiling a discography of the short-live label Fnac Music, an offshoot from the famous French retailer, active in classical music in the early 1990s, I chanced upon one of their (significantly more abundant) non-classical releases, one by the industrial percussion ensemble Les Tambours du Bronx: Monostress 225L.  FNAC Music 592048 (1992). I bought it – well, one, because it sold very cheap, and two, for sake of the old days: I remember, or think I remember attending one of their concerts, back in the last millenium… or maybe I’m confusing with Stomp (that would have been later), or Urban Sax (I definitely attended one of theirs). Anyway, for a while, as a young adult, I had nurtured an interest for Les Tambours du Bronx. There was tremendous energy there, I found at the time.

Heard today, and as a purely audio experience, I found the music “raw, pounding, simplistic” and ” effective if you get a kick from loud pounding“. For me, one hearing (well, a little more for the sake of writing the review) and on the shelf for eternity, or the portion of it still granted to me.

Or rather, I thought I was buying the original issue by Eurobond Just In Distribution. But where things get a bit confusing is that Fnac apparently also reissued the CD under the same barcode as the one originally used by Eurobond Just In Distribution (3297497603037), but with the same cover art as the one (later?) used when Fnac reissued the recording under its own barcode (3383007603038), and with its own logo printed on the back cover.

So I got not the original Eurobond CD release as I expected, but the Fnac (first?) reissue. So much for my attempt to add some vintage issue to my collection. Well, for the price I paid, I can’t complain too much either. But, knowing that sellers usually list their items according to barcode, if you are specifically looking for the original release, make sure to check with seller what which edition he is selling.

There is no copyright indication on my edition to indicate the year of issue (nor indication of recording date or venue), and I don’t see any either on the (easily legible) photo of the original Eurobond release that I’ve found online. Most online sources for that edition indicate 1989, but I don’t know what they base the claim on. It is only on an online photo of the Fnac (second?) reissue under its own barcode that I see a copyright year of 1990 (but the copyright is to Tambours du Bronx, not Fnac Music, so it may not indicate the year of the edition’s release) and the mention that the album was recorded in 1989 in Paris (on the occasion of the centennial of the Eiffel Tower).  The years of 1989 and 1990 for original release and reissue remain tentative, then.

Another reason for buying the CD was just to see if the style of Les Tambours du Bronx had evolved from their first to their second recording. It hasn’t. Already there are the shouts, pounding, energy, and, really, simplistic rhythms, “boom boom ta-boom”. The effect draws on obstinate regularity of pulse and decibels, NOT on complexity and subtlety. Again, it’s probably effective in concert, especially with younger audiences, but heard on CD, shortly after the other one, the effect is very shallow, I find. Only track 3 stands out, for using some electronic sounds which bring a much-neaded textural variety. TT is 19 minutes – even for an LP, that was disappointingly short. But, truth is, given the first 19 minutes, I don’t think double or triple more would have added anything.

The disc’s subtitle – printed on the backcover – is “industrial percussion – railroad rock”, in reference to the fact that Les Tambours du Bronx was born in a suburbian neighborhood of the small French provincial town of Nevers known as “Le Bronx”, then inhabited by workers from the French railroad company: that’s where they found their first drums, the legend says. Incidentally, a more uppity reference to Nevers can be found in the famous film of Alain Resnais Hiroshima mon amour, and to me Nevers will always resonate more with “tu n’as rien vu à Nevers” – “you haven’t seen anything in Nevers” – than with The Bronx and fuel drums.

I’ll stop there with Tambours du Bronx and shelf that one with its younger brother, for the rest of my portion of eternity.