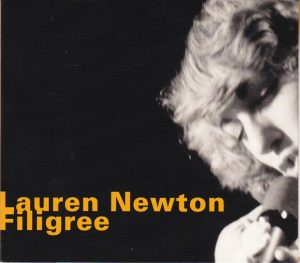 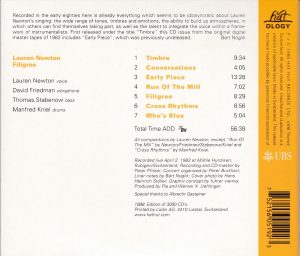 Lauren Newton is an American avant-garde Jazz vocalist, born in 1952, more active and recognized in the German-speaking countries of Europe than in the US (she holds a teaching position in Lucerne, Switzerland), and a founding member of the Vienna Art Orchestra, the leading Jazz ensemble from Vienna in activity from 1977 to 2010.

To quote her English Wikipedia entry, “Lauren Newton’s music is typically highly abstract, blending conventional technique with non-conventional vocal sounds.” The German Wikipedia entry is more effusive than that, calling her “one of the most important contemprorary Jazz vocalists, and according to Peter Rüedi, ‘one of the most signifcant contemporary vocal improvisers’”.

Not being into Jazz myself, I discovered her only recently, through the Vienna Arts Orchestra’s recording of arrangements of Satie, “The Minimalism of Erik Satie”, HatART 6024, barcode 7619925602423 (1989). I was arrested and intrigued enough by her few contributions – indeed quite outlandish – to want to explore more. “Filigree”, a live recording from April 2, 1982  first existed as an LP titled “Timbre”, hat MUSICS 3511 (the link will open a new tab on the LP’s page on Discogs), named after its first track. It was reissued to CD only in 1998 (“from the original digital master tapes of 1982”), on HatArt’s sub-label HATology 519, but with the addition of “Early Piece”, track 3, which was not issued at the time. No doubt the disc’s title was changed because in the meanwhile, in 1995, Newton had recorded another CD also titled “Timbre”, on Leo Records CD LR 221, barcode 5024792022120 (the link sends you on a new tab to the CD’s page on the label’s website). “Filigree” is the title of its fifth track.

Track 2, “Conversations”, running 4 minutes and purely vocal, is very typical of what she’s able to do and of her outlandish improvisational skills, a tour de force of invented gibberish, the soundtrack for a Tom & Jerry cartoon. Those familiar with vocalist Urzsula Dudziak will find themselves in familiar territory (I know her through her album “Future Talk” – link sends you on a new tab to the LP’s entry at Discogs), and I’m not a bit surprised that the two later collaborated together in the Vocal Summit group, which also featured Bobby McFerrin, Jay Clayton and Jeanne Lee  (“Vocal Summit : Sorrow Is Not Forever – Love Is”, Moer’s Music Momu 02004 CD, barcode 012770200429). “Run of the Mill”, track 4, also has Newton mix various vocal sounds and onomatopoeia to her singing. “Cross Rhythms”, track 6, is a hugely rhythmic and exciting piece, with Newton dialoguing in scat with pulsating drums.

But tracks like “Timbre”, “Early Piece”, “Filligree” and “Who’s Blue” also illustrate her purely singing abilities and her readiness to explore a variety of modes of expression. She has a beautifully honed soprano voice with a vast rage from bottom to top and she uses it to the full. “Filigree” (track 5) and, at least at the beginning and end,“Early Piece”, track 3 – actually a play on the German word Frühstück, meaning “breakfast” – find at her most melismatic, lyrical and slow-moving; in the middle, “Early Piece” also moves into more agitated and scat-“onomatopeïc” grounds. In all cases the voice is used instrumentally: no lyrics are sung.

More than the Satie program, Filigree is more firmly anchored into modern Jazz, and in many tracks Newton not only gets the support of her three accompanists, double-bass Thomas Stabenow, drums Manfred Kniel and vibraphone David Friedman (the later adding great touches of crystalline color), but she alternates with them and they are given their extended passages and solos.

The liner notes submit that “listening to these pieces you will discover unexpected beauties as well as intriguing adventures”. Yes, I agree, except that I would have inverted the two propositions: the listener will discover intriguing adventures, that’s fore sure. Whether he will hear the beauties lies in the listener, his ears, mind, background and expectations rather than with in the singer. Certainly, this is for the adventurous in Jazz and extended vocal techniques. TT 56:38, excellent liner notes, specific to the reissue. Those more interested in Classical than Jazz may want to explore Newton’s recording of Mahler’s Kindertotenlieder on KlangRäume 30140, barcode 4017593301403.

More info about Lauren Newton on her website, and samples of her unique vocal style on YouTube.