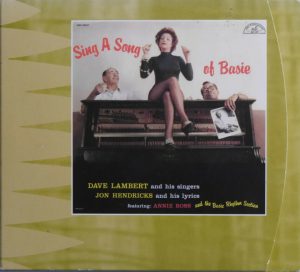 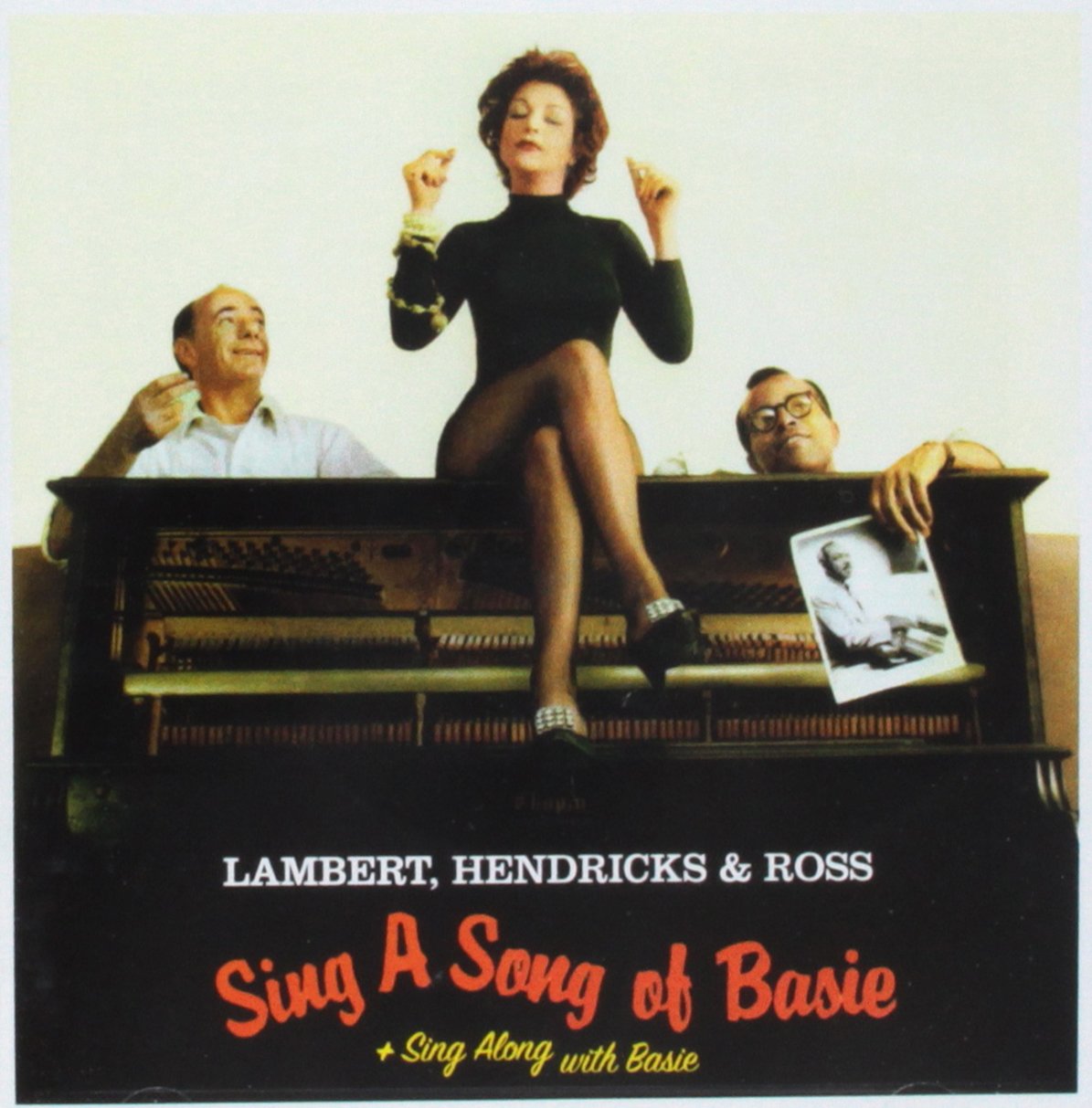 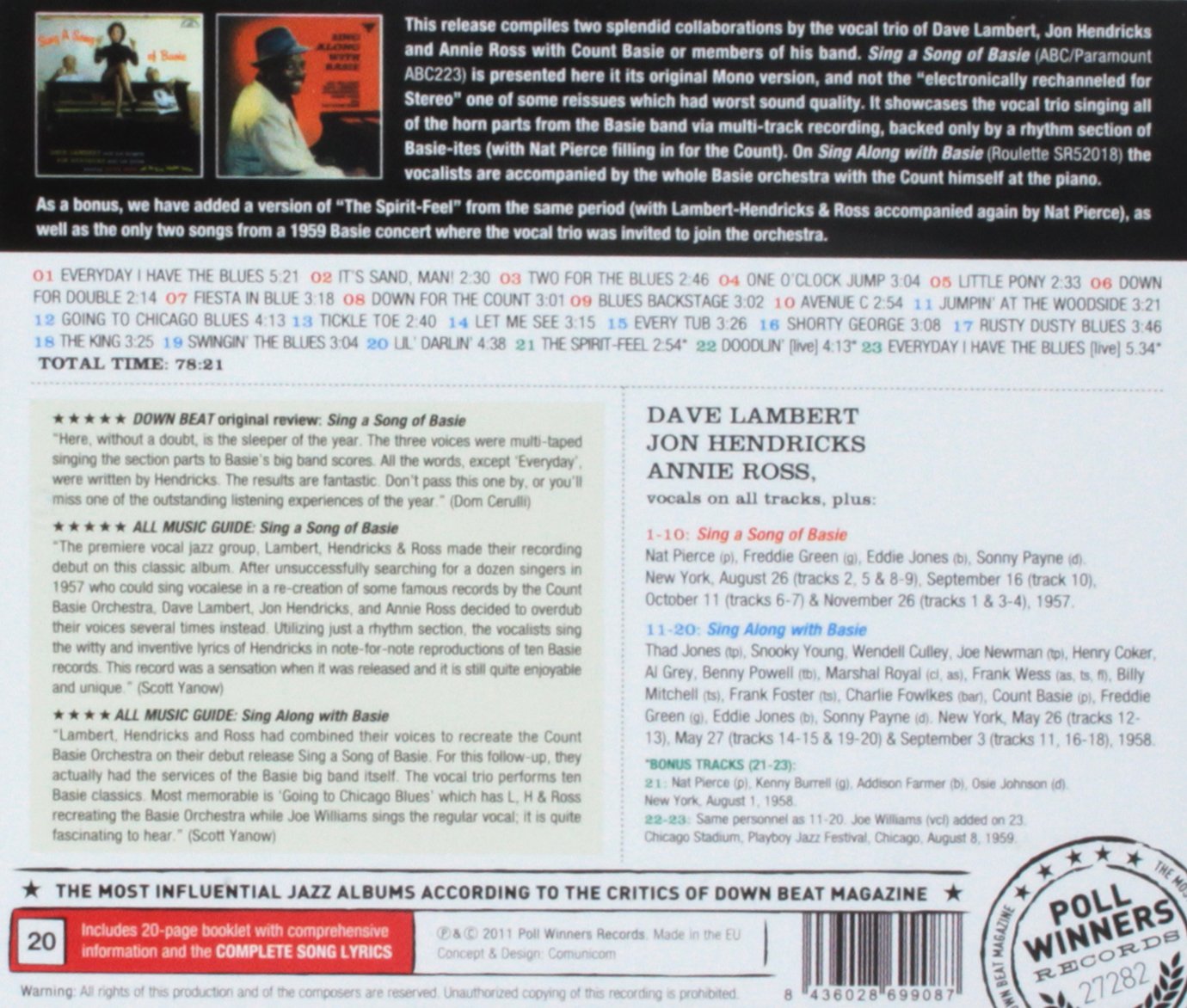 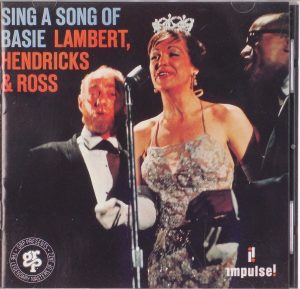 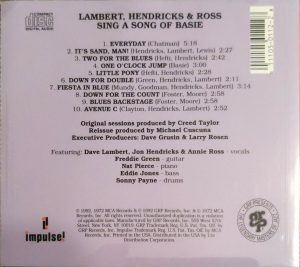 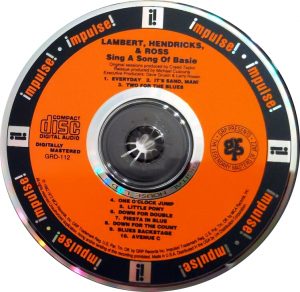 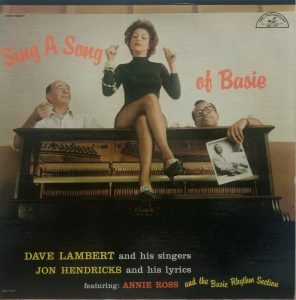 Just want to add my voice to the rest of the flock and say that all the other reviews are true. I guess my only input here is that it is an almost exclusive listener of Classical music writing. But this is indeed one of the most glorious testaments of the multi-faceted capacities of the human voice, that deserves the be put on an equal standing with the most virtuosic vocal music of Haendel, Vivaldi, Mozart, Rossini and all the way down to Berio and Aperghis. It is also immensely playful and fun.

Still, it is fitting that I came to the Jazz trio through the Swingles: it is a process of going back to the very roots. Sure, when they first came in existence in 1962, the Swingle Singers tackled Bach rather than Basie (Basie and the various forms of pops came later, after the original, Paris-based group had disbanded and re-formed in London, in 1973, see my Swingle Singers chronological and critical discography  Part II), and they didn’t add lyrics, just scatted. Nonetheless, the Swingles are direct heirs to Lambert-Hendricks and Ross, since their founder, the American Ward Swingle, started his singing career as a jazz vocalist with the French Double Six de Paris around soprano Mimi Perrin, a group which, I now realize, invented nothing but only brilliantly frenchified what Lambert-Hendricks and Ross had brilliantly created (see RCA Victor / BMG “Les Double Six”, barcode 743216431427). 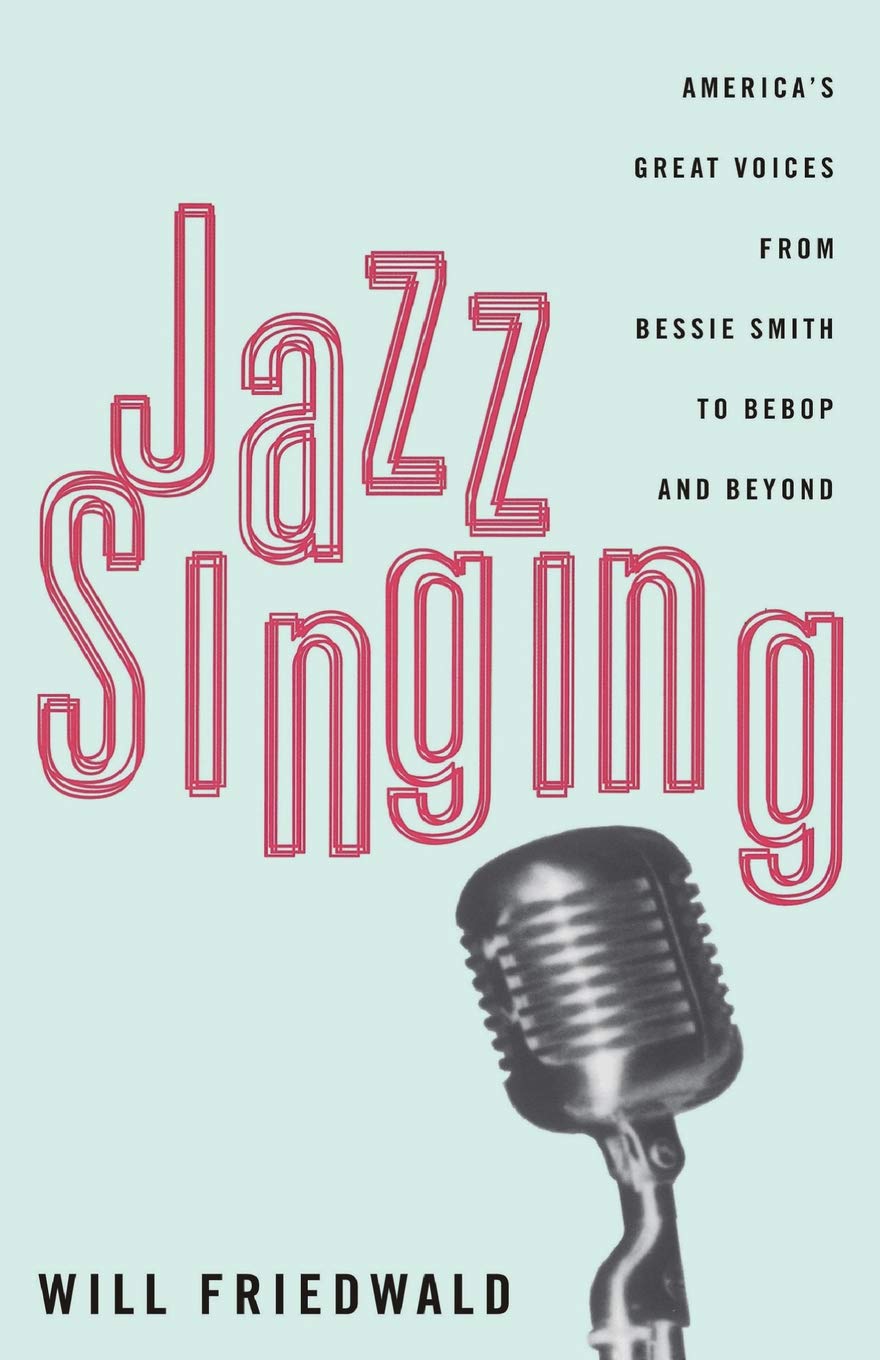 The CD’s liner notes, by Will Friedwald (author of “Jazz Singing: America’s Great Voices From Bessie Smith To Bebop And Beyond”, barcode 0306807122), are greatly informative and add much to the disc’s value. They recall how this art form called “jazz vocalese” came into being. Lambert and Hendricks didn’t invent it (“There are examples of the techique going back to the 1930s, but it really came into its own with “Moody’s Mood for Love” (1952), in which vocalist King Pleasure sang words to a saxophone solo by James Moody based on the standard “I’m in the Mood for Love”), but, with their album “Sing A Song Of Basie”, in 1958, they brought it to an instant state of quasi-perfection, a feat even more impressive given the very rudimentary overdubbing techniques available back then. It is also fun to learn that both the overdubbing trick AND Ross’ participation were almost an accident: Ross (to her great disappointment) was intially hired only as a jazz coach for the sight-reading, studio chorus that Lambert and Hendricks had hired to do the “accompaniment” – and it didn’t work: they could not be coached into learning a genuine jazz swing and rhythm. Says Hendricks: “we sounded like the Moron Tabernacle Choir (…). They couldn’t swing if you hung them”. Now you know where the great lyrics come from; apparently the man couldn’t refrain from being funny even being waterboarded. So from that failure, Hendricks and Lambert decided to try multitracking themselves and Ross – and it worked. Not that it worked instantly. It was an exhausting process of trial and error, while the three unsalaried and broke singers were, litterally, starving. Well, it goes on to prove that hunger is a great propellant. Sometimes.

The liner notes are also fascinating in quoting Hendricks explaining how he devised his lyrics: taking his lead from the titles of Basie’s purely instrumental pieces, going musical phrase by musical phrase, finding the words that fit that phrase and forming the thought. The result is a brilliant combination of the sensical and the non-sensical poetry, and the ability of the overdubbed trio to imitate the various instrumental sections of Basie’s Big Band is exhilarating. Verve must be thanked for including the printed lyrics – Hendrick’s words often zip by too fast for the mind to register without the help of the eyes (and even then…), and they are so fun and brilliantly conceived you really want to drink them to the last drop. Only regret: the lyrics to some of the songs are missing: track 4 “One O’Clock Jump”, which inexplicably were not included in the original album, and those of the three last bonus tracks, the earliest collaborations of Lambert and Hendricks from May 1955 before they added Ross, including one previously unpublished (reason unexplained), track 13, “Standin’ on the Corner (Whistling at the Pretty Girls)”, integral with Hendrick’s whistling.

Short TT of 39-minutes on this Verve reissue, despite the fact that it adds three bonus tracks to the original album, but these 39 minutes are well worth many other discs’ double. The 1992 CD reissue of the original album on the label Impulse! was even shorter (and I don’t know if the liner notes were as interesting). Still, the augmented reissue is  preferable; I bought it a few years after reviewing the Verve reissue.