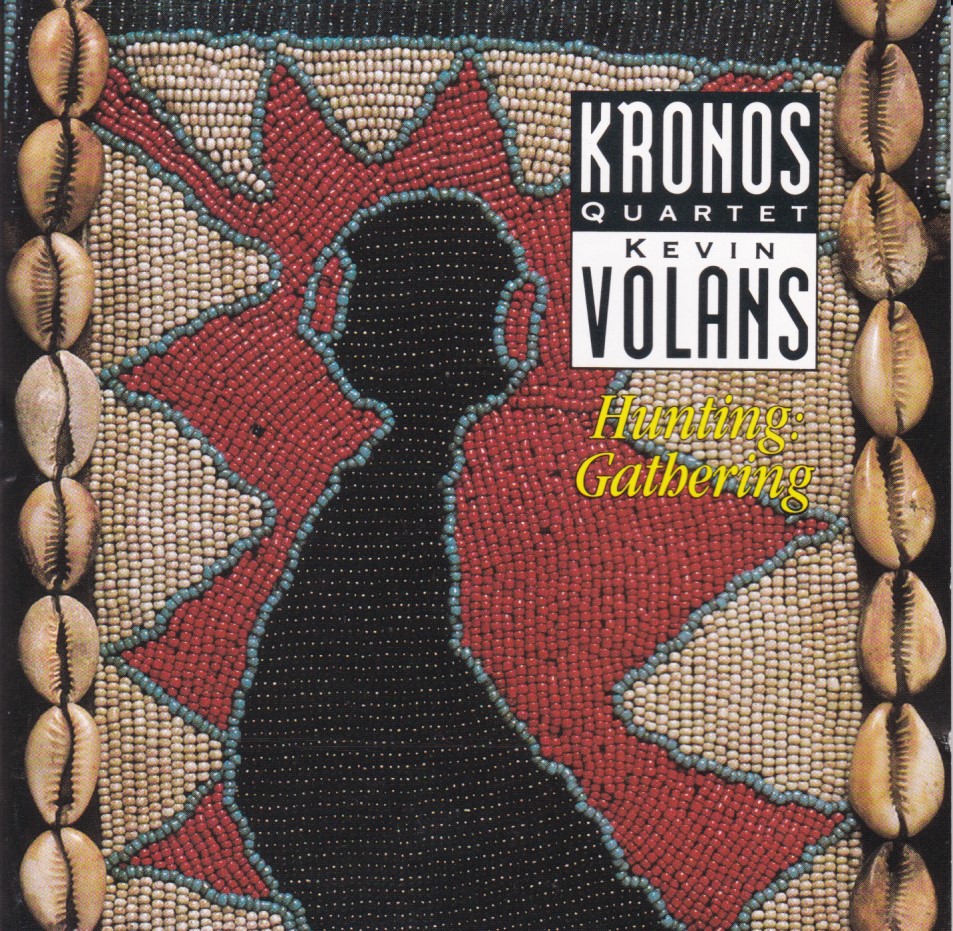 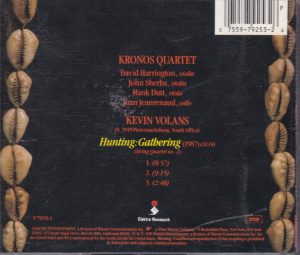 This is so good, there should have been three times as much!
Originally posted on Amazon.com, 27 August 2010

As with Terry Riley (see my reviews of Cadenza on the Night Plain on Gramavision R2 79444 and Salome Dances for Peace on Elektra Nonesuch 9 79217-2), the collaboration of the Kronos Quartet with South-African composer Kevin Volans, initiated in 1984, has produced compositions for string quartet which I consider to belong among the masterpieces in the genre composed in the last fifty years, and with the advantage that, unlike those other more complex masterpieces which have their roots more exclusively in the traditions of Western classical music (like those of Ligeti, Penderecki, Lutoslawski, Dutilleux, Schnittke, Gubaidulina, Isang Yun to mention only a few), those of Volans, based on various traditions of African music, are immediately and intensely appealing.

The collaboration started when Kronos asked Volans to transpose for them a piece written in 1982, “White Man Sleeps”, originally for two harpsichords, viola da gamba and percussion playing in a non-equal-temperament, African-derived tuning. Volans first resisted the idea, considering that the transposition would significantly alter the work’s nature. In his own words (reproduced in the liner notes to the Duke Quartet‘s recording of quartets 1, 2 and 6 on Black Box BBM1069), “I couldn’t see how the quartet version could either play in quasi-African tuning, or compensate for the loss of unique colour brought about by equal temperament.” But then he changed his mind, “because the string quartet encapsulated the very heart of Western classical music” and produced a work that, through the change of medium, had changed nature. Kronos recorded it on Elektra Nonesuch’s Pieces of Africa, an interpretation that is preferable, more dynamic, biting and light-footed than the one by the Duke Quartet.

The collaboration continued with Volans’ second String Quartet, “Hunting: Gathering”, featured here. The title is unexplained and so are the titles of the individual movements, not even indicated on this disc’s booklet but that you find on the recording by the Balanescu Quartet on Argo 440 687-2 (1994): “first, second and third expedition”. As “White Man Sleeps”, Volans uses quotations or quasi-quotations of music from many different origins and locations in Africa, “ranging from very rough approximations of style to more or less precise transcriptions“, but the singularity of “Hunting: Gathering” is an architectural one: in it, Volans sought to dismiss the Western tradition of focusing on and developing one primary idea, and tried instead to incorporate as many different fragments as possible (23 in the course of the piece’s 22 minutes), in an apparently purely intuitive succession. In his own words (gathered and coalesced from both the liner notes of this disc and those of the Balanescu Quartet’s recording): “When I wrote ‘Hunting: Gathering’ in 1987, I had grown tired of the ‘composition etude’ – the one-idea piece. I decided to try and write a piece which included as many different musical fragments as possible, strung together in a pseudo-narrative. To emphasize the separateness of each piece of music, I wrote them in different keys. As I wanted the different pieces to come and go in a random fashion like images or events on an unplanned journey, my principal problem was how to move from one key to another without any sense of development (i.e. without modulating). I was also consciously trying to keep the overall scale of events constant not allowing one piece to dominate the others unduly.”

OK for the process, but what about the result? As already hinted, I love it, and find it hugely atmospheric and inventive. The succession of episodes may be intuitive, but it never gives the impression of being artificially pieced together; on the contrary, it feels entirely organic. Some hushed upward glissandos irresistibly evoke Britten, but then it is a Britten turned to World-Music. It has the appeal and fascination of those African tunes – some dynamic, some more nostalgic – combined with the full resources of the Western string quartet and its ability at producing a wide range of tonal colors. Let me quote Volans’ words from the liner notes to the Balanescu disc: despite the rooting in African music, “it is above all the choice of medium, the string quartet, that places the material firmly in the Western classical tradition. Japanese prints informed every aspect of Van Goghs’s late work – the colour, the sense of light the formal thinking. Yet Van Gogh’s choice of oil paint on canvas makes the painting Western European.”

The reading of the Kronos Quartet is preferable to the Balanescu’s, and, overall, to the Duke Quartet’s: leaner-textured, brisker, more light-footed and lively, and also more subtle (than Balanescu) in the harmonics of the first movement, although the Balanescu and even more the Duke have more beef and an immediate sensuousness of sound that to a certain extent compensates, in that first movement, their lesser dynamism. But the second movement has a totally different character, lively and dance-like with Kronos, more deliberate and wistful with the Duke, heavier and almost plangent with Balanescu.

Still, it is a hard call between this disc and its competitors, since this one is one of those one-work, short-timed CDs so typical of the Kronos: 21:16. Why they haven’t recorded the 3rd Quartet, “The Songlines” – which after all they also commissioned and premiered – eludes me. In fact Quartets 1-3 would fit on a single disc. The third Quartet is more abstract and pointillistic, less immediately appealing than the first two, at least for listeners not seasoned in contemporary classical music. But I wouldn’t want to be without it, and as it is, I am happy to have these multiple versions of the first two. That’s what classical music lovers do with masterpieces, and “Hunting: Gathering” is one.