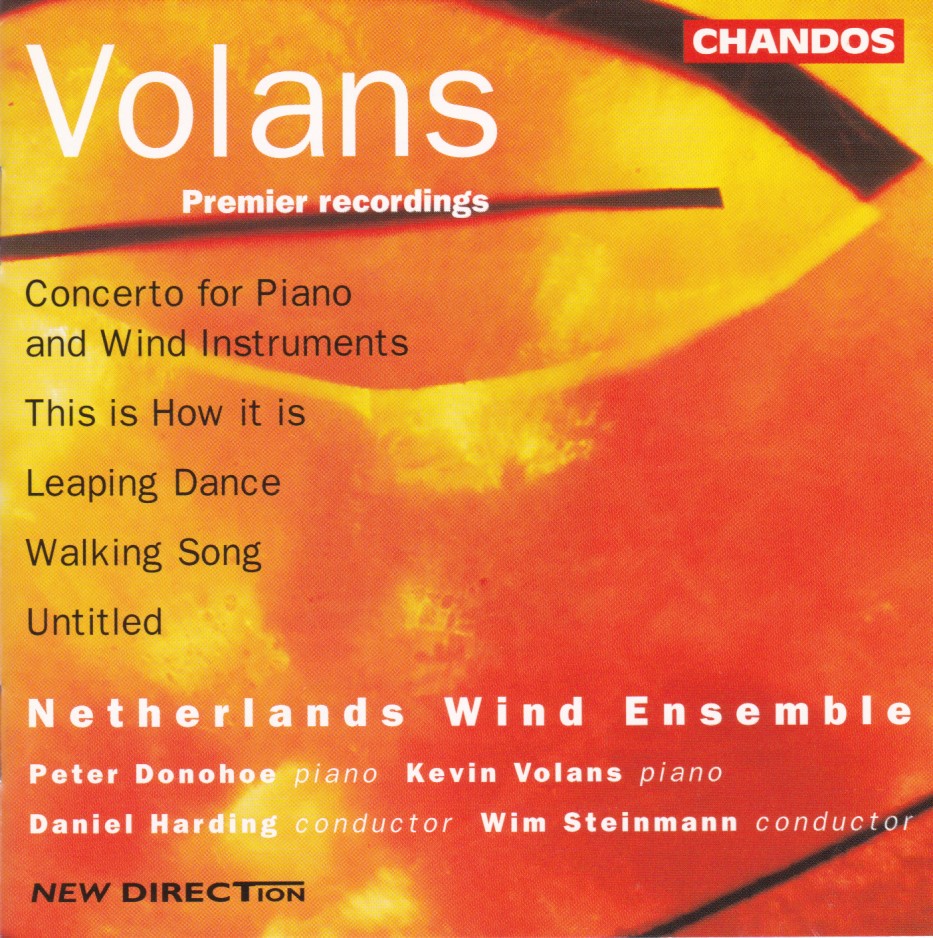 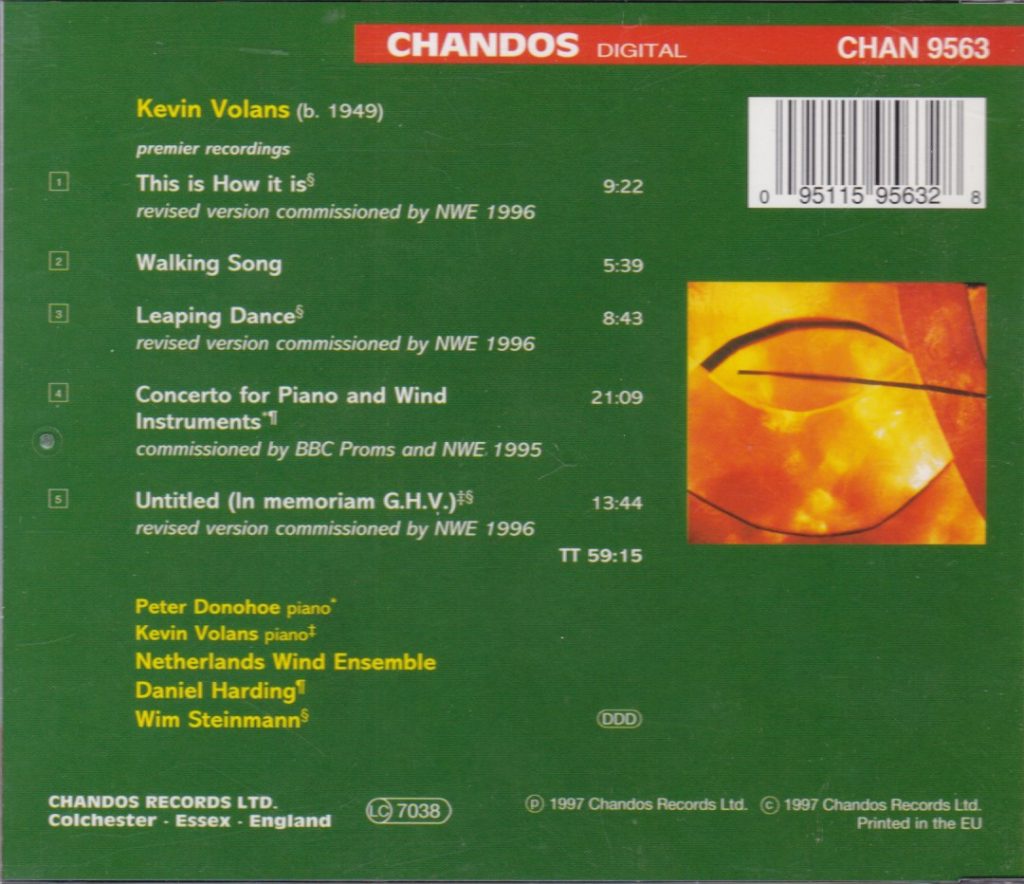 What is wonderful about the music of Volans is that it combines accessibility and complexity
Originally posted on Amazon.com, 27 March 2015

The music of South-African Kevin Volans is truly wonderful.

In the fine and informative liner notes, Volans rejects being considered a minimalist. Sure, his music is, to an extent, based on repetition, but when it is, it is the kind of repetition that marks ethnic dance music, and Volans draws a lot of inspiration from a number of African traditions, and not just South-. But he staunchly rejects being a minimalist because, he says, all his music goes against the “dogma of the one-idea piece (be it serial, minimalist or whatever)“.

Volans rejects being a “post-modernist”. To him, “modernism is not a style but a tenet: nothing is given – there is no received language” and in this sense, considers himself “to be a committed modernist“.

Maybe so, but “modernism” in music has also been associated to both the “one-idea dogma” and to a rejection of the “easy-accessibility” of romantic and late-romantic music. In that sense, much of Volans’ music, because based on ethnic dance traditions and themes, is very accessible and appealing, which doesn’t preclude being based on complex rhythmic processes and intricate architectures. In fact, what’s wonderful about Volans’ music is that he combines accessibility and complexity. What he writes of “Leaping Dance” is very typical: “I was interested in the way interlocking techniques in African music were used to enable players to reach extraordinarily hight speeds. I also loved the irregular patterning to be found not only in the music, but also in the textiles of the African continent.”

All these pieces except track 2 “Walking Song” were written for the Netherlands Wind Ensemble in 1995 and 1996, some of them are transcriptions for winds of pieces originally written for other lineups. “This is How it is” was originally a dance in his opera written on the last months of the poet Arthur Rimbaud – I want to hear this opera before I die. “Leaping Dance” appeared in 1984 in the form of a piece for two pianos, and the last piece, “Untitled (in memoriam G.H.V.)” for piano and off-stage winds, was written “for Jonathan Burrow’s dance piece `The Stop Quartet'”, which I understand to mean “for a ballet” (and a check on Wikipedia confirms the inference: `The Stop Quartet’ is a ballet choreographed by Jonathan BurrowS – the mistake is the liner notes’ not mine – in 1996 on music of Volans and Matteo Fargion).

I’m hard put to imagine how the latter could have been danced: it is slow-moving, dreamy, wistful music (written, says Volans, “during the shock of bereavement”), with a lot of piano resonance (and a 30″ moment of silence in the middle), and to me the least-interesing piece on the program. There’s a certain trend in today’s music for writing that kind of dreamy, wistful, facile and sentimental music – the worst being possibly the piano music of Valentin Silvestrov, see my review of Nostalghia: Piano Works – and I guess it meets an audience, but not me. In Volans the piano is at least relieved by the few mysteriously processional side-comments by the offstage winds, and I guess there is also, towards the end, a certain trance-like effect that arises from those 13+ minutes of dreamy nothingness.

On the opposite, running 21 minutes, the Concerto for Piano is the program’s main dish and probably the least easily-accessible piece, which doesn’t make it difficult either, not if you are familiar with contemporary music. The orchestration makes it sound, but only fugitively, like Stravinsky’s own Concerto, also written for an accompaniment of winds. It’s the most “abstract” piece of the program, but it has moments of great sweep as well – just try the beginning -, always breathtaking instrumental volubility (the woodwinds in the first movement sound like a wild fauna of tropical birds), and always beautiful sonic imagination. This is one of the most satistying and convincing contemporary Piano Concertos I’ve heard in a while, indebted, so far as I can hear, to no one.