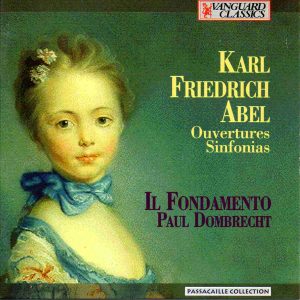 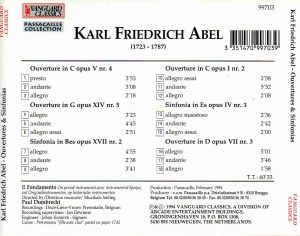 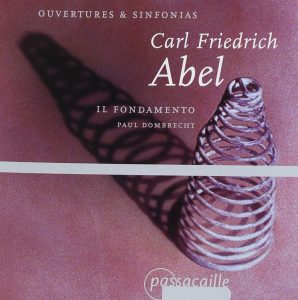 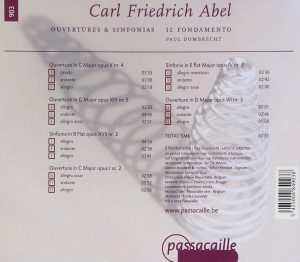 A good place to start your collection
Originally posted on Amazon.com, 7 March 2010

From Adès (b. 1971) to Abel (1723-1787). As I was slotting into place the latest CD of music by Thomas Adès (b. 1971) that I’ve heard and reviewed (see my review on Amazon.com, America: A Prophecy), I realized that a few CDs to the left (I’m not very enthusiastic about John Adams, but I do have a version of Adolphe Adam’s “Le Postillon de Lonjumeau”), this recital of Overtures and Sinfonias of Karl (usually spelt Carl) Friedrich Abel was the first in alphabetical order of my sizeable collection. Since I have this vague and unrealistic notion of leaving reviews of all of them before I die or doomsday (whichever happens first), I thought it would be as good a place to start as any other. Not that I intend to be consistent and move on alphabetically, because I don’t want to wait that long to review the hauntingly beautiful music of Isang Yun.

The recording was made in February 1994 and I have its first release, on Dutch Vanguard. It was reissued in 2002  by the same label, with a different cover (“Passacaille” is in fact the name of the collection, and already was on the original disc). It is an enjoyable disc, that will offer much pleasure to amateurs of 18th Century music from Bach and Haendel to Mozart and Haydn. In fact Abel’s style is closer to Haydn and the Bach sons than to Haendel (but with a boisterousness in the fast movements that links them to the latter). No surprise: Abel’s dates, 1723-1787, make him roughly a contemporary of the Bach sons (Wilhelm Friedemann 1710 – 1784, Carl-Philip 1714 – 1788), of Gluck (1714 – 1787), Leopold Mozart (1719 – 1787) and Haydn (1732 – 1809). His father Christian Ferdinand played the violin and viola da gamba in the famous orchestra of Cöthen (where his son was born) when Johann Sebastian was its Kapellmeister, and Carl himself played in the Dresden court orchestra under the famous Hasse, where he made the acquaintance of Wilhelm Friedemann Bach (Bach’s second child and eldest son), who was organist in Dresden at the time. In 1758 he established in London, where he founded (in 1762) the famous Bach-Abel concerts with Johann Christian Bach’s, Bach’s 11th and youngest son (1735-1782). He remained in London to the end of his life.

II Fondamento under Paul Dombrecht, a period-instrument ensemble (21 members), turn out what sound like spirited performances, maybe a little laid-back in some of the fast movements (I’d need to hear the same works performed, say, by Concerto Köln to make sure), with the slightly acid tone so typical of such period-ensembles. This will not replace your favorite Haydn and Mozart, but will offer a fine complement for those interested in placing the great masters in historical context. TT 60:33, excellent notes in the original Vanguard release.

A good place to start your collection then – alphabetically, I mean.