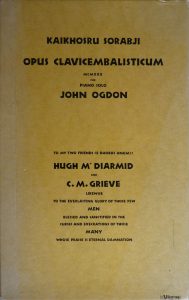 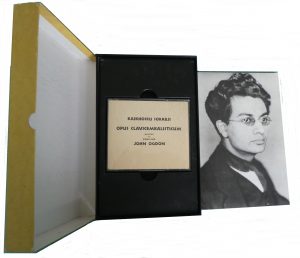 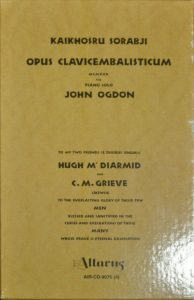 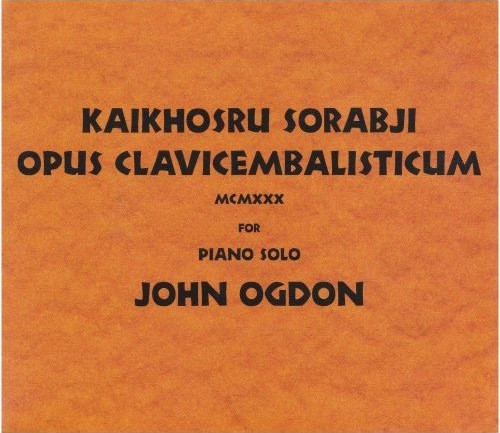 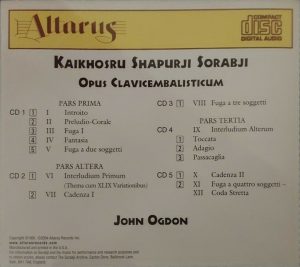 From Altarus’ website : Spread over 5 CDs (the previous edition was on 4, but the price is unchanged) with the principal benefit that the great Theme and 49 Variations is no longer split over 2 discs, the recording has been completely remastered from the original master tapes using state of the art 24-bit digital technology and our engineers’ customary meticulous attention to detail, allowing the massed sonorities and filigree delicacy of Ogdon’s playing to be presented with a degree of clarity and precision surpassing even that of the previous edition. The new edition is packaged in the now-familiar ‘opera set’ format (which did not exist when the set was first issued) with the CDs in a 5-CD case alongside the booklet, now 100 pages, in an outer slipcase which fits on normal CD shelves. The booklet has been extensively updated and incorporates numerous small but important revisions and corrections to the text. All the essays and photographs from the previous edition are included: Ronald Stevenson’s masterly analysis (with 35 music examples), the composer’s own note on the piece, a comprehensive list of Sorabji’s works (the most up to date and accurate currently in print), John Ogdon’s provocative and illuminating essay on Sorabji and Herman Melville, and much other material besides.

Recorded 8-12 July & 8-15 November 1985 at the church of St. Silas The Martyr, Kentish Town, London, 10-15 March 1986 at ? (dates from Pianistdiscography.com and location from Piano Man: Life of John Ogdon by Charles Beauclerk)

The Piano Man: life of John Ogdon by Charles Beauclerk: “In the second half of 1985 John completed two of the three recording sessions for Opus Clavicembalisticum in the church of St Silas the Martyr in Kentish Town, a project that finally had the blessing of the composer himself. This was largely achieved through the auspices of the composer Alistair Hinton, one of the few with a direct line to Sorabji. Hinton attended all the recording sessions and his knowledge of Sorabji’s score proved tremendously useful in navigating what was a musical minefiled. They worked from the manuscrpt copy at Cape Town University (brought by Hinton) in tandem with a copy of Sorabji’s publication proofs. Because Sorabji had no patience with proofreading he had corrected many things that weren’t errors, thus making an already confusing score even less decipherable. John, with his uncanny ability to see both the wood and every single tree in it, was unfazed by the luxuriant, un-pruned tropical forest that stood before him. The misprints and mistakes were all part of the complex weave. One whole stave had the music printed with a treble clef when it should have been a bass clef; everyone present thought it sounded weird when John played the passage as printed. A look back at Hinton’s copy of the manuscript score revealed a discrepancy of line change between the printed publication and Sorabji’s original manuscript, whereby the bass clef had been omitted. As soon as this was rectified, despite the change of register and notes, John was able to play the passage perfectly – without even looking at it, let alone practising it. The fact that Sorabji didn’t put many markings in his scores freed the performer to feel his way more deeply into the music.”