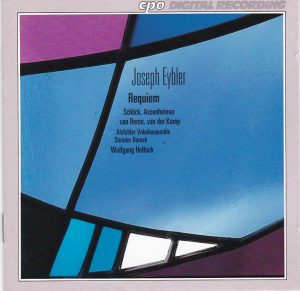 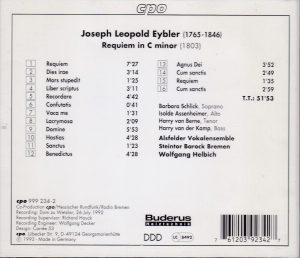 Who the hell is Eybler? An epigone of Verdi? Fauré? A case of blind – and deaf – listening.
1 September 2016

I bought this CD from an eBay seller, selected among his “other offers”, to benefit from postage rebates on combined shipment, never having heard of the composer and having no clue about his nationality or chronology, whether he composed in the 16th, 17th, 18th or 19th Century – two of the singers, Barbara Schlick and Harry van der Kamp, are rather associated with 18th Century music, that was the only pointer to anything. And when I received my shipment, I just put the CD on the tray and listened, without looking at the CD’s info. Based on this “blind” hearing (better that than deaf, I considered), I heard a little bit of Fauré (in the brooding introductory Requiem and the searing vocal lyricism of some of its solos, in the somber Liber scriptus track 3, the plangent Lacrymosa and the pathetic accents of its chorus, track 8), a lot of Verdi (in the mighty explosions of the Dies Irae, track 2, the tremulations of the “Quantus tremor” passage in the same movement), so I’d guessed end of 19th – turn to 20th century – but sometimes the music could have been from 50 years or 100 years earlier, “Sturm und Drang” (the Requiem of Gossec came to mind) or Romantic from the 1840s or ’50s (I thought of Von Suppé, who wrote not only merry and fluffy operettas but also a beautiful Requiem). But, no, the gigantic Verdian blast of power of Confutatis (track 6) made it again unmistakably late 19th or early 20th, and made Eybler sound like a composer under influence – and sometimes even approaching his great model.

Having reached the Domine, track 9 (another movement of Verdian power – or was it the power of Haydn’s Nelson-Mass?), I couldn’t resist and had to look. And that’s when, at 2:34, the Domine setting (on the words of prayer to Saint Michael to lead the souls of the deceased believers into the Holy Light) took on a distinctly Mozartean feel. And – Jeez’! Did I delude myself and smear egg all over my face… Because it turns out that my hearing was not just blind, it was deaf as well: 1803!! That’s certainly more in sync with Gossec than with Verdi or Fauré… Eybler’s dates? 1765-1846 – makes him Mozart’s younger by less than a decade, and indeed Eybler, an echt-Viennese, was a student of Mozart (though his main teacher was Albrechtsberger), and conducted some of the premiere performances of Cosi fan tutte. He was even Constanze Mozart’s first choice to complete her deceased husband’s Requiem, but Eybler couldn’t manage, so she passed it on to Süssmayer. And it’s true that, listening again, the basso singing the “Tuba mirum” (track 2 at 2:33) is reminiscent of the same passage in Mozart’s Requiem – but Eybler’s scoring for brass there is much more inventive and impressive tha Süssmayer’s embarrassing trombone! In fact Eybler is part of that generation that’s hard to pinpoint stylistically, because they make the transition from the classical style of Mozart and Haydn to the early romanticism of Spohr (1784-1859), Weber (1786-1826), Schubert (1797-1828) and Berwald (1796-1868). Among those, you find Lesueur (1760 – 1837), Cherubini (1760-1842), Méhul (1763-1817), one of the big rivals of Beethoven in Vienna Anton Eberl (1765-1807)… and, of course, Beethoven (1770-1827). Incidentally, nothing is mentioned in Eybler’s bios of his relation with Beethoven, who was really, until his death, the controversial star of Vienna. As for Eybler, he was “establishment”, a protégé of Empress Maria Theresa in his earlier years, appointed the assistant of Salieri as Court composer in 1804, then succeeding him upon his retirement in 1824, and even granted nobility in 1835.

But even though he grew up and was trained in the classical style, Eybler’s 81-year lifespan means that, had he been able to travel to Dresden in his old age, he could have attended the premiere of Tannhäuser (1845) – which probably would have killed him. Well, he didn’t even need that: he had suffered a stroke in 1833 (conducting Mozart’s Requiem!) and had been left invalid thereafter, unable to accomplish his duties of Court composer, and he died of his own accord a year after the knight torn between profane and sacred love started his stage career. And poor Eybler is one of those cases of a composer feted during his lifetime, and immediately forgotten after his death.

But, here you go: an early 19th-Century Requiem, pre-dating Beethoven’s Missa Solemnis by two decades, by a totally unknown Austrian composer of a generation even closer to Beethoven than to Mozart, and often displaying the power of Verdi’s Requiem (that it is scored for an 8-part double choir and a sizeable section of winds and brass explains part of it) and the brooding inwardness of Fauré, and at other times the vocal lyricism and choral power of the best of Mozart and Haydn. Thank you cpo. The liner notes quote a comment from music critic Johann Friedrich Rochlitz (same generation as Eybler), published in the Allgemeine Musikalische Zeitung after the premiere of the Requiem in 1803: “The more familiar the reviewer became with the work, the more his surprise changed into admiration – and admiration into joy. But the latter was at the same time clouded with a certain feeling of shamed embarrassment. What? he said to himself; you think you are familiar with the major testimonies of the art of music… familiar with their composers, dead or living. And there lives in Vienna, in your own time, a man, who was abel to accomplish what he has accomplished here, and from whom you have never seen one note, whose name you’ve hardly ever heard and that he wrote valuable Masses you hardly knew?” That, of course, was a year before Eybler was appointed vice-Court composer to Salieri, which may explain why Rochlitz had hardly until then heard of him. But, two centuries later, we’re still there.