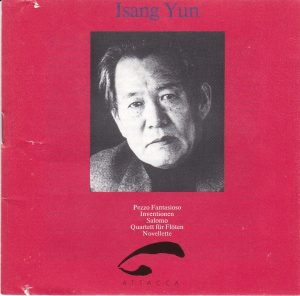 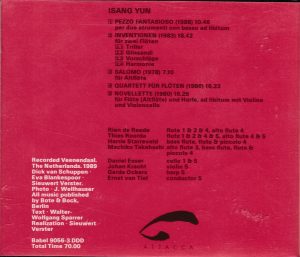 Korean composer Isang Yun (1917-1995) invented a unique style, combining the most cutting-edge avant-garde and the melismatic traditions from Korean court music. It produced, especially in Yun’s later years, music of striking originality and confounding beauty, and of this these works for flute offer a great testimony. The CD collates works composed from 1978 to 1988, the last one (Pezzo Fantasioso) completed just a year before the recording.

The flute(s) suits Yun, because their blend can go from the sensuously caressing to the mysteriously other-worldly in the high registers and to the piercingly vehement. Pezzo Fantasioso (track 1) is enigmatic, subtly nostalgic and dreamy, softly playing, and replete with Yun’s stylistic signature, the flourishing and frantic melismata in the highest flute registers. The four Inventionen for two flutes (track 2, 1983) offer much of the same. They are in fact Etudes, each Invention exploring a different technique or effect, “Trills” (sounding like frantic exotic birds), “Glissandi” (starting at 4:12, again enigmatic, subtly nostalgic and dreamy, with moments of greater agitation), “Appoggiaturas” (“Vorschläge” can also be translated by “grace notes”, 8:48, agitated and anguished), “Harmony” (12:42, softly caressing). Softly caressing is also how the Quartet for flutes begins (track 4, 1986), before escalating to more agitated heights, again sounding like a voluble and frantic aviary from another world. Although traversing the same moods and tonal colors, Salomo for solo alto flute (1978, track 3) is more austere, because the solo instrument is offered nothing to blend with. Finally comes Novellette (1980, track 5), a duet for alto flute and harp, which offers moments of ineffable beauty, with its two ad lib strings (violin and cello) placed in a distant background, besides moments of great vehemence.

“CD recorded in close collaboration with Isang Yun” conclude the liner notes. The other recordng  that I have of Pezzo Fantasioso, played by the Albert Schweitzer woodwind quintet on Cpo 999 184-2 (barcode 761203918423), isn’t exactly comparable to this one, because there the lineup is oboe, clarinet and bassoon. The gentle softness and dreamy quality of the flutes lend a particular beauty to the version for two flutes and cello here. I also have another recording for both Salomo and Novellette. Machiko Takahashi here plays Salomo with occasionally more forcefulness but also more tonal firmness and cleanness than Roswitha Staege on Camerata 32CM-109, Compositions of Isang Yun-9 (reissued on Camerata CMCD-50029, Art of Isang Yun-6, barcode 796825721823), whose tone is rounder and mellower, but whose close recording pickup exposes at times the huge vibrating lack of homogeneity of her tonal production – you can really hear the dynamic oscillations of  the sound emanating from her instrument.  Novellette was also recorded by Roswitha Staege, now on Capriccio 67116. Preference for either is very subjective, with maybe a slight nudge if favor of the Attacca Babel recording, which affords slightly more refinement to the instruments, with the harp sounding more crystalline, the “distancing” effect of the two strings rendered with slightly more eeriness, whereas the sound is thicker in the tutti fortes on Capriccio, more in your ears. Then, Attacca Babel’s all-flute program is certainly more coherent, and immensely attractive (although, as with all great composers, it is permissible, and even advisable, to have more than one version in your collection). All the music gathered here is fascinating, enrapturing, I find it profoundly original, and no lover of contemporary flute (or just flute, or just contemporary music, or just music) should miss it. TT 70 minutes.