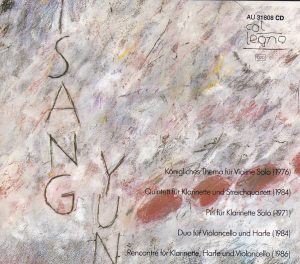 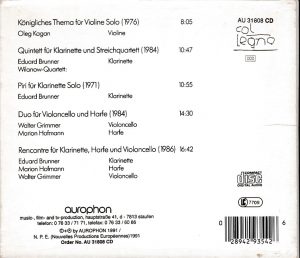 The “Royal Theme” is the one submitted to Bach by Emperor Friedrich II, and later used by the composer as the basis of his “Musical Offering”. Yun’s composition is a series of variations on the theme. It is a relatively early work of his (1976), and it sounds as a piece dating from before he fully embraced his own “reunification” with the melismatic traditions of Chinese and Korean Court music that make his works, starting in the late 1970s, so unique and so fascinating. It is a stern, brooding and forbidding work, at times strident, no big deal for ears honed to contemporary music, but one of the least immediately seductive works of Yun, one that sounds the closest to “contemporary music”. For more seductiveness, hear his Sonatina for two violins (on Compositions of Isang Yun vol. 3, Camerata 32CM-107, reissued Art of Isang Yun vol. 9, Camerata CMCD 50032).

Nonetheless, it is the most recorded composition of Yun: in their very complete discography, the International Yun Society lists 14 versions (including twice two different recordings by the same fiddlers, Akiko Tatsumi and Kolja Lessing), made between 1979 and 2009 (but none since). Kagan’s recording is affected by a soft electronic buzz that you can hear over the headphones, but it’s soft enough and I haven’t found it a real bother. Of the five versions in my collection, his reading is overall the most ample (but not in every section, and Kagan can be very dynamic), the least aggressive (which doesn’t mean he lacks intensity) and the most nuanced in his dynamic shadings and his differentiation of tonal planes when fiddler jumps from low to high string. Serge Garcia, on 2e2m 1010 (released in 1997 but recorded in 1990) , is the “tightest” but he smudges some details in the fastest climaxes, and Akiko Tatsumi (her second recording, on Compositions of Isang Yun-8 Camerata 32CM-70, reissued on Art of Isang Yun 9, see above) is in between, though she tends to be a little placid in the fast passages and she too becomes a little strident and not absolutely clean in her articulation in some of the climaxes. Kolja Lessing’s first recording from 1988, from an interesting program of Bach and Bach-inspired compositions played by this versatile performer both on the violin and the piano, which I have on Ars Musici AM 0954-2, barcode (there’s also an edition from Deutsche Harmonia Mundi), is also very dynamic and muscular but also tonally remarkably clean, although he doesn’t always do the most with the composition’s pizz’ and double stops. If pressed to chose only one it would probably be Kagan (with Lessing coming second), but whatever the microscopic distinctions careful listening may detect, all four do justice to the piece, and none try to “prettify” it. The one that strays in that respect is Lessing in his remake from 2007, on the 7th installment from the International Isang Yun Society, IYG 007. Over the years he’s mellowed, his tone is never strident and always elegant, but (maybe due to the more distant recording pickup, but only in part) his attacks have become somewhat too smooth and lightweight I find, too legato-ized and lacking bow and emotional intensity at times.

This album was first released on LP in 1987 on the occasion of the composer’s 70th birthday, Col Legno 5515. Apparently it was issue to CD first in 1988, on Col Legno 429 354-2: I’ve seen online traces of that CD, but haven’t found a backcover photo to determine if it has a barcode. If you live near Columbia University, you can check. My copy is Col Legno / Aurophon AU 31 808, from 1991, with a barcode corresponding to the 429 354-2 label number: 028942935426. The first page of the booklet tells you that “this album bears the number … and is hand-signed by the composer”, but my alas my copy has no number and no such signature, so I’m supposing that this was only on the limited 429 354-2 series, or maybe even the LP, as the entry on Amazon Germany and the one on Discogs (many superb photos, but all upside down!) seem to suggest. Col Legno reissued it – most sources say in 2000, one distributor claims 2008, and Col Legno’s own website says nothing, maybe there were two reissues – with label number WWE 31808 and a new barcode, 4010165318083, which is how it is most commonly listed, but all the cover photos I’ve seen seem to be exactly the same as my 1991 copy, and I haven’t found a backcover photo to check for sure the new label number and barcode

The Oleg Kagan recording is something like the odd-piece and odd-performer-out on the CD, which otherwise gathers compositions for clarinet, cello and/or harp performed by Eduard Brunner (clarinet), Marion Hofman (harp) and Walter Grimmer (cello). Brunner is the great champion of Yun’s 1984 Clarinet Quintet (the composer added a second one ten years later): I have three recordings with him, first with the Akiko Tatsumi Quartet, recorded in 1984, also on Camerata’s above-mentioned Compositions of Isang Yun-8 (reissued on Art of Isang Yun vol. 7: Chamber music II), then this one with the Wilanow Quartet (recorded in 1986), and finally with the Amati Quartet on Cpo (recorded in 1996). Not surprisingly the three versions are very similar, with slightly more mellowness from the string quartet in the first one (which may offer more comfort of hearing, but at the cost of some clarity), more sonic presence and slightly more forcefulness, but less tonal subtlety and delicacy in the last one, and the second, in between and possibly striking the best balance (it’s also the most pressing in its tempos, although this does not translate into a truly perceptible interpretive difference), although each one gives satisfaction. Sabine Meyer with members of the Vienna String Sextet on EMI is the one truly alternative view, less forceful, more deliberate, dreamy and tender, painted in somewhat pastel colors, more (and apologies for the cliché) “feminine”. I personally prefer Brunner’s greater contrasts, and among his three versions, the cpo CD has the most coherent program. The Quintet is a beautiful work, filled with Yun’s stylistic signature, the trilling strings or flageolet-like harmonics in the high registers like sounds from another world, the upward and downward (often semi-tone) glissandi like soft moans, the constant and very free mood jumps, from the softly caressing and dreamy to the vehement, but always feeling very organic.

Piri (1971), played here on clarinet, is the earliest piece of Yun collated on the CD and was originally written for oboe and oboist Georg Meerwein, who had been active in staging the protest to the South-Korean government to set the imprisoned Yun free (in 1967, Yun, a South-Korean established in Berlin and a political opponent to what was then in South Korea a dictatorial regime, actively advocating the reunification of both Koreas, was kidnapped by the South Korean secret police, taken to Seoul, tortured, condemned for espionage and sentenced to life imprisonment. In the face of the international protestation the Korean Government eventually released and exiled him, and Yun never returned to Korea). The Piri is the double reed instrument, similar to the oboe, used in folk and court music of Korea. It is one of the first pieces written by Yun after his liberation and as often with the composer, there is a secret theatrical content to the piece. As Yun writes, “the theme of the piece represents a convict confined in a prison and suggest that although he is physically held captive, his spirit and thoughts are free to wonder far and wide. The last part consists solely of multiple tones which signify his earnest prayer”.

Piri is also one of Yun’s most-recorded compositions: the Yun Society discography lists 10 versions (including four played on the clarinet), and among these, three by Heinz Holliger including the premiere recording made in 1974, and three by Brunner – I also have the one on Camerata 32CM-46, Compositions of Isang Yun-1, reissued on Art of Isang Yun vol. 8 Camerata CMCD 50031, recorded in 1982. The other one is on a clarinet recital, “Dal Niente”, on ECM New Series 1599, barcode 028945325729, with works of Stravinsky, Boulez, Lachenmann, Stockhausen and Scelsi (1997).

The version for clarinet played by Brunner and the one for oboe played by Holliger are very different works, because of the differences between both instruments, in timbre (oboe more nasal, clarinet more mellow) and pitch  (clarinet plays it a tone below). Brunner’s two versions are very similar. That said, Piri is not the most seductive of Yun’s compositions. A solo oboe or clarinet is already a fairly difficult instrument, if only because its polyphonic abilities are limited, and contemporary composers have felt compelled to invent new performing techniques, new modes of tone production and new sounds – and rarely mellifluous ones – as if to make up for the instrument’s relatively limited scope. In Piri, Yun is no different, and while I’m sure it’s an exciting piece for oboists and clarinetists to play because of is constant use of those extended techniques, quarter-tone glissandos, overtones and multiphonics, it’s not such a riveting work to hear: when the clarinet doesn’t intone long, hushed notes (and Brunner plays beautiful pianissimi, coming from the threshold of silence) that don’t really connect into a melody, it tends to shriek. It is possibly Holliger, in his third recording, on ECM New Series 1848/49, “Lauds and Lamentations: Music of Elliott Carter and Isang Yun”, barcode 028947278726, from 2003, who makes the best case for the piece, not only by dint of the instrument’s uniquely nasal timbre which evokes better than the clarinet a folk instrument from the far-East, but also because Holliger’s very spacious reading has more of a ritualistic feel to it, like distant memories of Greek (or Korean) mythology.

Duo for Cello and Harp, from 1984, has a delicacy and caressing dreaminess which reminds me, more than the Sonata for Oboe Harp and Viola (on Compositions of Isang Yun-5, Camerata 32CM-22, reissued on Art of Isang Yun vol. 8, see link above), of Debussy’s Sonata for Flute, Viola and Harp, or maybe, in the more vehement, rhythmical and whimsical second movement with its dancing cello pizzicati, a mixture of that and of his Sonata for Cello and Piano. Not that it’s written in the same style, but it offers a whimsicality of phrasings and subtlety of colors very much in the spirit of Debussy. It’s almost a piece Britten could have composed as well in his later years. The same Walter Grimmer who plays it here re-recorded it 13 years later, now with harpist Maria Graf, on Capriccio 67 116. As with Brunner’s Clarinet Quintets, the two versions are very similar, just a touch more urgent and vehement in the first movement on Col Legno, but the sound of the harp he is also a touch more opaque and less crystalline than on Capriccio (not so, though, not perceptibly, in the third movement).

The very complete discography available from the Isang Yun Society lists only this version of Rencontre for clarinet, harp and cello, from 1986. There is nothing in the piece itself that would justify this relative discographic neglect. It’s typical Yun, organically alternating between the Debussy-like caressing and dreamy delicacy, and the vehement outbursts turning the instruments into quasi-dancing protagonists. Yun’s music always evokes a secret theatre.

Good liner notes, but oftentimes inept English translation that looks as if it had been made by a translation software. Sure, “Opfer” in German can be translated by “sacrifice” (for instance, das Opferlamm is the sacrificial lamb), or, in other contexts, “victim”. But, in the context of Bach’s “Musikalische Opfer”, anybody with just a superficial acquaintance with classical music will know that the accepted English translation is “Musical Offering”. Not that this should detain anybody. On the other hand, I would beware of two reissues of the present CD, EMG / Essential Media Classical 4942856, titled “Chamber Music: World Premiere Recordings”, barcode 0894231398322, and an “X5 Music Group”, “Isang Yun Chamber Music”, barcode 885444404061. These appear to be essentially downloads, with on-demand CD-R if you opt for CD.