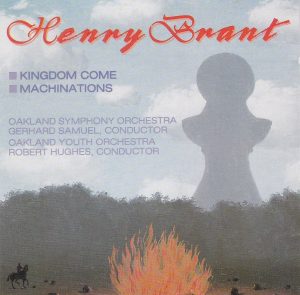 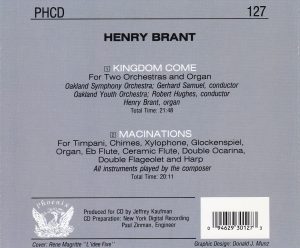 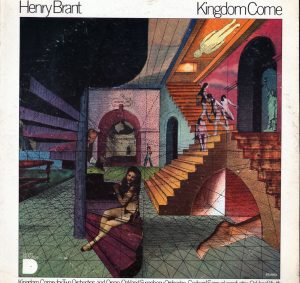 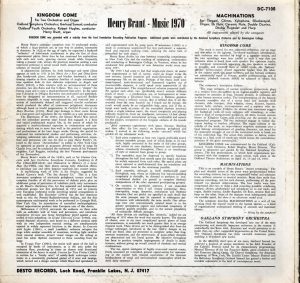 and a release on cassette tape:

The equivalent with sounds of Joyce with words
Originally posted on Amazon.com, 10 February 2008

First, the criticisms. Phoenix has been a very useful label in bringing back to the catalog valuable material from relatively obscure LP catalogs such as Desto and Everest, but they have often contented themselves in reissuing those LPs “straight”, with no fillers, usually resulting in shamefully short TTs for CDs. This one is a good case in point, with its 42:07, but I’ve encountered other similar cases.

The second criticism is that Phoenix has a very cavalier attitude to their product info. They simply do not mention the sources and recording dates of their material, letting you believe this is new, DDD stuff. It isn’t. This is the reissue of Desto 7108, and dates from the early 1970s. The sound lacks a bit of clarity, but it is more than acceptable.

Too bad then, as there was more music of Henry Brant on the Desto catalog that Phoenix could have picked from for this reissue. So the bottom line is that the music would need to be exceptionally good and rare to justify the purchase of such a short CD.

Well – it is. I find it exceptionally inventive, free, daring, and excruciatingly funny.

“Kingdom Come”, written in 1970 on a commission from the Oakland Youth Orchestra, is scored for two orchestras and organ and illustrates Brant’s research and theories about spatializing music. One orchestra is supposed to be on stage and the other in the balcony – in this case, re the liner notes, “each orchestra was recorded by itself at a separate session, and the two recordings were later joinded in such a way that one orchestra alone is heard from each speaker.” The stage orchestra, of normal proportions, plays aggressive contemporary music, always in a strident forte, while the balcony orchestra is a circus band, playing circus / Coney-Island music, with plenty of added noises – percussion, sirens, bells, whistles, klaxons, buzzers and ratchets along with the tuba humpah music, and even at one point a demented soprano “who impersonates a psychotic Valkyrie”. It is all irresistibly funny, but also of great dramatic power.

Though Brant can appear in Kingdom Come as the illegitimate child of George Antheil (and he did go to Antheil in the late 1930s for lessons – how disappointed he must have been to have found the erstwhile “bad boy of music” turned conservative!) and Edgar Varèse, I was ready to write that his music is unique and without equivalent, but then it dawned on me that its use of collage technique, of jarring juxtapositions of stylistically unrelated musics, of mock circus music and its provocative and outlandish sense of humor did remind of another composer: the German Bernd-Alois Zimmermann. Ligeti’s “Le Grand Macabre” would also be a distant heir, although Ligeti hasn’t pushed the concept nearly as far as Brant.

The liner notes claim that Machinations is NOT electronic music, which doesn’t paint the entire picture. Its instrumental combination includes timpani, chimes, xylophone, Glockenspiel, harp, organ and various kinds of flutes – all played by the composer in a semi-improvised manner on four separate recordings, then compressed into two tracks. It does sound very much like the kind of Musique Concrète Pierre Henry could have “written”, though. First, because of the unusual instrumental sounds, the tintinibulations of the percussion instruments and the sinous, if not sinusoidal flute lines, giving it all an eerie air, and then because in various points the textures have been altered through varying the tape speed, making the! even more eerie and tipsily distorted. So electronic music maybe not, but tape music (although based on recordings of acoustic instruments) certainly. I like the music of Pierre Henry very much, I find it inventive and highly poetic, so it is no surprise that I find this one as appealing. It is cryptic, evocative, maddening, an equivalent in sounds of James Joyce with words and, again, in its own way, very funny.

But be warned. As the music of Zimmermann (and as the novels of Joyce), this music is NOT “pretty” music, not “easy-listening”. It is highly demanding, it panders to the tastes of no-one, it is noise made to music, it is crazy, berserk, cacophonous – and that’s what makes it so unique and, in its own way, so appealing and entertaining.

After having scorned Phoenix’s slapdash attitude to product info and timing, I am happy to report that the liner notes are exceptionally informative.

I’m in for more music of Henry Brant, on the basis of this disc one of the greatest mavericks of 20th Century America.