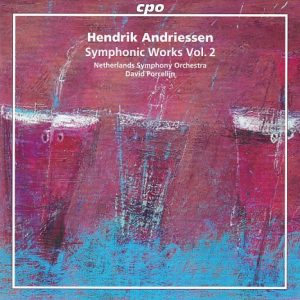 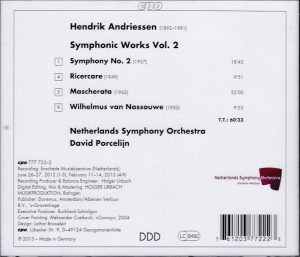 The impression derived from volume 1 was that of a composer not bound to a single style, going from Roussel (for whose music he professed great admiration) in the first symphony from 1930 (but a mixture of the late-Romantic Roussel of Symphonies Nos. 1 & 2 and the motoric Roussel of Symphonies 3 & 4) or even D’Indy in the 1947 Ballet Suite, to Schoenberg in the Symphonic Etude from 1952, based on a Schoenberg-inspired twelve-tone melody, and of music always enjoyable, often dramatic, but whose limitation was that it wasn’t very personal and unmistakably ascribable to one composer, although works like the Kuhnau Variations or the Symphonic Etude rose above the stock-and-trade of Andriessen’s time.

Impression confirmed with volume 2. The second symphony, dating from seven years later than the first, is more advanced than Roussel (although echoes of Roussel’s last symphonies can be heard in the Finale). If fact, the music of Honegger comes to mind – the most dramatic Honegger of the Symphonies: music that straddles two stylistic worlds, modern but not avant-garde, and always melodic, compact and very free in construction, although with Honegger there is, again, an unmistakable personality which makes it possible to recognize its composer after two bars, which is not as obvious with Andriessen. Nonetheless, the symphony is a powerful work.

And so is the Ricercare, a set of variations on the BACH theme. The Kuhnau Variations evoked at times Vaughan Williams’ Tallis Fantasia, and so does it, although, like its predecessor, it alternates between the funeral-brooding and more animated and scherzando passages. I have two other versions of the Ricercare in my collection, one a studio recording made for Philips in 1951 by Willem van Otterloo, reissued in the great 13-CD tribute to the conductor published by Challenge Classics, CC 72142, and the other one by the Netherlands Radio Chamber Orchestra under Ed Spanjaard on Olympia OCD 507 (1992). In decreasing order of intensity in the slow sections and of spirited dynamism in the fast ones: Van Otterloo, Porcelijn, Spanjaard, but Porcelijn has, of course, over Van Otterloo, the advantage of the 2013 stereo sonics (but Challenge’s mono sound is excellent), availability, price.

The Wilhelmus Rhapsody from 1950 is a free elaboration using many themes other than the one of the Dutch national anthem (the song set to words about William of Nassau, aka William of Orange, the leader of the resitstance to the Spanish domination in the 16th century), with moments scherzando, some lyrical and romantic, some dramatic – again bringing to mind Honegger without the distinctive stylistic personality. Yet, in its mixtures of moods, it is, compared to the 2nd Symphony and even more to the Symphonic Etude of two years later, a step back stylistically. That Andriessen wasn’t bound to only one style and that his stylistic evolution wasn’t in a straight line is shown by Mascherata, a piece he wrote in 1962, after his Schoenberg-influenced time. Mascherata is an homage of sorts to Commedia dell’Arte and its characters Arlecchino, Pierro and Colombina, Scarmamuccia and others. It is a Scherzo in four movements, sometimes leaving the jesting for the dramatic, brilliantly orchestrated, and it harks back to Roussel or even Dukas’ Sorcerer’s Apprentice. That kind of music would have been fine, though hardly cutting edge, in the 1920s or 1930s. In 1962, this must have sounded terribly backward-looking.

And that may be the problem with Andriessen and one of the explanations of his relative neglect today: as well-crafted and enjoyable as is the music, the composer lacks a strong stylistic line and strong personality. Still, within that limit, there is a lot to enjoy here. TT 60:27. For the third installment in Cpo’s series, see Hendrik Andriessen: Symphonic Works volume 3 (Symphony No. 3, Symphony Concertante, “Chantecler” Overture). Netherlands SO, David Porcelijn, Cpo 777 723-2 (2015), and for more music of the composer, see my Hendrik Andriessen presentation page.