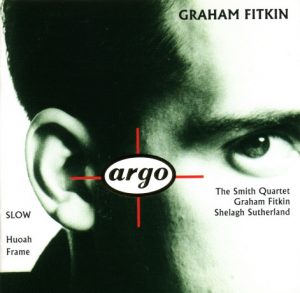 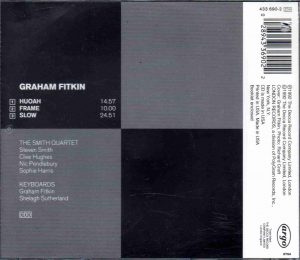 The three pieces gathered on this disc – published in 1992 by Argo, a sublabel of Decca in operation from 1990 to circa 1997-8 – are scored for string quartet and two keyboards (Huoah, Slow) or just two keyboards (Frame), an instrumentation deliberately chosen by Fitkin for its timbral homogeneity. Re the liner notes, “the composer prefers to write for groups which present a limited timbral range rather than for those which mix very different instrumental colours. His reason for this is a desire to focus on the parameters of rhythm and pitch. Fitkin feels that over-decorative use of colouristic resources can often mask structural deficiencies in a piece of music. For him structural perfection is essential and distractions from this goal need to be restricted. To this end Fitkin has composed much for solo piano and for multiple pianos. For Fitkin the piano is ideal as it offers the full range of harmonic possibilities while utilising only a single timbre thereby allowing him to concentrate on the organisation of rhythm and pitch”. Funny, although the music is poles apart – simplicity and easy-listening vs complexity and tough-listening – it is exactly the same reasoning that was behind Boulez’ use of two pianos for his radically serial “Structures”.

Anyway, back to Fitkin’s music, I don’t know about structural perfection, but the impression elicited by the pieces on this listener is of upbeat dynamism, rhythmic vitality, dance music – but also a degree of shallowness. Rhythm, dance, rhythm, dance, but what behind, or beyond the rhythm and dance? It’s like peeling the onion, layer after layer, and in the end you reach nothingness. Entertaining for a listen, but no real incentive to listen again. Slow, the last piece on the CD, is the one that sounds the most like music Michael Nyman could have composed, an alternation of exciting, upbeat dance music for string quartet over harmonic underpinning by keyboards, and of would-be-arch-lyrical but in truth mawkishly sentimental, wistful melody (often played by cello). Not the facet of this vast conglomerate which gathers minimalism, dance music, classical-meets-world-music and all kinds of “neo-simplicity” that I prefer.

TT 51 minutes, the label, Argo, was often more generous in its servings than that. See my Fitkin introductory page for more reviews of his music.