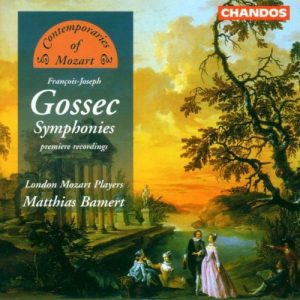 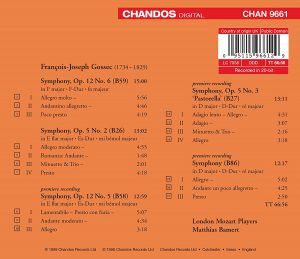 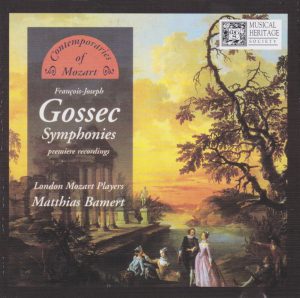 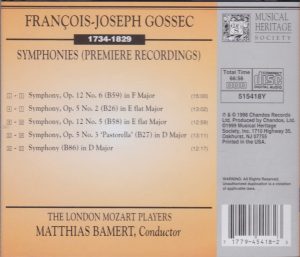 What I find immensely appealing in Gossec’s symphonies is that the composer manages to be smiling and sunny without being superficially galant, elegant and salon-like. Let me explain. At the risk of generalizing and over-symplifying, symphonies written in the second half of the 18th century – roughly, the classical era, between baroque and pre- or early-romantic (or between Vivaldi-Rameau and Beethoven) are written either in a dramatic, “Sturm & Drang” style, or in galant style.

Just about every composer active between, say, the 1760s and 1780s seems to have had his Sturm & Drang crisis – Gluck was one of the main champions of that style, Haydn caught the disease for a decade (around his 49th Symphony from 1768, “La Passione” – the title says it all), Mozart’s 25th from 1773 is often mentioned in relation to that style. But I’ve also reviewed many very typical recordings by Concerto Köln or others of music of Vanhal (Teldec 7 0630-13141-2 8), Kozeluch (Teldec 8573-85495-2), Kraus (Capriccio 10 396 and Capriccio 10 430), Dittersdorf and many more. It reached a point where Dittersdorf even mocked it, in his symphony titled “”The Delirium of Composers, or the Taste of Today” (see my review of Dittersdorf: Sinfonias with titles, Naxos 8.553957). My time limits are rather arbitrary as well. On their recital “La Prise de la Bastille”, Capriccio 10 220, Concerto Köln also recorded a symphony by an obscure French composer, François Martin, published in 1751, whose agitated outer movements as much point to Sturm & Drang as they recall the Italian baroque, and one attributed to Dittersdorf – but apparently written by an obscure Flemish composer, Othon-Joseph Vandenbroecke (1759-1832, also spelled Vandenbroeck, van den Broeck, or van den Broek), from 1793. And Mozart’s last symphonies, or Don Giovanni, or parts of the Requiem, are pretty sturm & drang in their own right.

Anyway, just about any symphony written in “Sturm & Drang” style will “work” on us, modern audiences whose tastes and sensibilities have been shaped by two centuries of dramatic, agitated, turbulent, angst-ridden romantic music.

Not so with the other style. Composers of that era – and that includes Haydn and Mozart as well – have written symphonies in a style that was elegant, galant, light-hearted, or festal and celebratory – and, to our modern ears (shaped by two centuries…. you know), seemingly without great emotional depth. Music for the aristocratic salon, wearing a powdered wig, proper, prim and well-manicured. The Menuettos and “slow” movements were very typical. The Menuettos – whose A-B-A architecture, with the B part often called Menuetto II, later evolved into the Scherzo and trio so typical of Beethoven and Schubert – were often rythmically square, stately and pedestrian in gait, and the “slow” movements were in fact rarely slow (and that, until Beethoven including), but rather “larghetto”, “andante” or “andantino”, even “allegretto”, and typically forward-moving: it is only the later, romantic-influenced interpreters who intepreted them as slow movements. Add to that “grazioso” or “tempo di romanza”, and you know how elegant and precious, but emotionally superfical it could get.

So, back to Gossec. The five symphonies selected by Mathias Bamert, written (it is supposed) between 1761 and 1776, are NOT written in Sturm & Drang style. In fact, it is the case with all of the (more than a dozen, out of an output of circa 60) symphonies of Gossec which I’ve heard so far. There is nothing dramatic, agitated, emotionally turbulent, angular about them. The closest we get to that kind of mood is in the slow introduction to op. 12-5 (track 8), “Lamentabile”, with its plangent, lamenting atmosphere. But the ensuing allegro, despite its “Presto con furia” marking (I don’t think I’ve ever encountered that indication in any other symphony from the classical era), doesn’t follow suit, emotionally. In fact, it develops a contrasting mood, like a “now, time to stop whining, let’s get on with it”.

But these symphonies are also far more than just galant, elegant, and well-manicured salon-music for the aristocrats. The two Minuettos of op. 5 (with their central section interestingly called a “trio” rather than a Minuetto 2; the symphonies from op. 12 and B86 are in three movements, without a such Minuetto) and the short “romanza: andante” of opus 5-2 (track 5), with its swift, marching beat, are the movement that follows most the “galant” pattern. The other slow movements may not plumb the same depths as the best of Mozart, but they have charm, elegance (the “Adagio” of op. 5/3, track 12, particularly so) and a degree of genuine pathos even in the two from op. 12 and the “andante un poco allegretto” of B86.

But the symphonies’ main emotional feature, especially in the outer movements, is unfettered joy. And Gossec stuck to it, no matter whether the symphonies were composed in 1761 (opus 5), 1769 (opus 12) or 1776 (B86).The outer movements of op. 5-2 and op. 12-6 are lively, wonderfully insouciant, emotionally gamboling, op. 12-5 is boisterous, and with great sweep in its finale. It may be an effect of the unhurried tempos chosen by Bamert, but the outer movements of B86 are festal and triumphant (when it starts you’d think you were in Mozart’s Haffner’s) rather than merry. The symphonies are also lushly orchestrated, with brass always present (including trumpet in B86, although it doesn’t really stand out soloistically), prominent clarinet in opus. 5-2, prominent flutes and horns in op. 5/3 (titled, not coincidentally, “La Pastorella”), prominent flutes and clarinets in the slow movement of B86.

A sign of the rarity of Gossec’s symphonies on disc, there aren’t many competing versions against which to gauge the interpretive value of Bamert. Opus 5 No. 2 is also performed by Stefan Sanderling on ASV CD DCA 1124, and the two readings are very comparable, except for a more spirited first movement from Sanderling. Other than that, Bamert generally seems to conduct with all the required liveliness and zest. In B86 the outer movements  may be too pedestrian, aiming at the festive and somewhat solemn rather than the unleashed, and I’d like to hear a more driving interpretation, the kind that Concerto Köln would no doubt offer. I didn’t really hear a difference either between Bamert’s  “Presto con furia” of op. 12-5 and a normal, simple “Allegro”, and I wonder if he didn’t invest it with enough “furia”. But then, this same opus 12-5 is played by Guy Van Waas and his period instrument group Les Agrémens on Ricercar-Outhère RIC 218, and the tempo choices are very similar – meaning that Van Waas plays the “presto con furia” no faster than Bamert. But Bamert has marginally more drive in the finale. The Dutch team has more transparency and presence than Bamert (whose sonics are a bit thick), but the tone of the period instrument ensemble is slightly acid and its colors greyish: Bamert’s modern-instrument London Mozart Players have more bloom and colors. So, ultimately, this is the version I prefer. In the first movement of op. 5-3, Jeanne Lamon and her period-instrument group Tafelmusik (on CBC SMCD 5225, “Mozart Noir” – Music of Joseph Boulogne de Saint-Georges”) have more bite and drive than the, here, comparatively slack Bamert (and again more transparency of sound), but Bamert’s flutes have more presence and character (in the Menuetto and trio also) – not an indifferent factor in a “Pastorella” symphony. Both finales are fine, with a small edge for Lamon, on account of her slightly more characterful horns. But Lamon’s middle adagio is surprisingly slow-moving and rather heavy-footed – I’d have expected a swifter approach from a period-instrument ensemble, which is in fact what Bamert does, and I find that it works better – although I hear space for an even brisker and light-footed gait.

Despite my small reservations, this disc has been extremely appealing. TT 67 minutes.