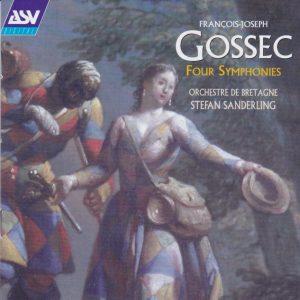 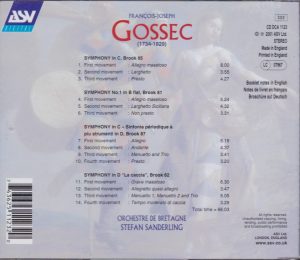 Marvelous music of Gossec! I can only repeat here what I’ve already said in my numerous reviews of Gossec’s symphonies, by Matthias Bamert (Chandos 9661), Concerto Köln (Capriccio 67 073), Les Agrémens under Guy Van Waas (Ricercar-Outhère RIC 218 and RIC 263) and vol. 2 of Stefan Sanderling’s 2-CD survey (ASV CD DCA 1124) (plus a number of others scattered in various collections, see my Gossec composer page). The marvelous thing about Gossec’s music is that there is very little trace of the pre-romantic emotional turmoil that characterized the “Sturm und Drang” style of the 1780s, its effect and impact is not reached through those means. His music is is merry, light-hearted, uplifting, insouciant. And yet, it is absolutely not “galant”, salon-like and superficial as much of the light-hearted music written in the Classical era – and that includes light-hearted and salon-like music written by Haydn and Mozart.

Allegros are full of sweep, verve and and filled with a sense of unfettered joy (tracks 1, 3, 7), imbued by a spirit of dance (track 6). The Finales of Mozart’s late operas may sometimes come to mind. Adagios are elegant and gently flowing and marked by a form of emotional restraint that is not, in my perception, superficiality. They evoke the games of seduction of Marivaux’ theatre – never flaunted or conspicuous, always “sans en avoir l’air” as the French say, and I can’t come up with a completely appropriate translation: the best I can do is “As if not”, make of that what you can. The “Larghetto Siciliana” of Symphony Brook 81 (track 5), with its dialoguing punctuations by flutes, and its tempestuous and dramatic interruption which passes in no time, is a little gem, and again the best Mozart comes to my mind. Again, in the caressing violin melody of the Andante of Sinfonia périodique Brook 87 (track 8), the Adagio of Mozart’s 21st Piano Concerto comes to mind, although there is nothing in Gossec of Mozart’s achingly brooding atmosphere, he evokes to me more a feeling of gentle wooing, or perhaps of sorrow put at a distance, “these things have no importance”. I find it beautiful and very moving.

And Symphony “La Caccia” is yet something else, with its hunting horns and hunting spirit in the outer movements (“barking” horns in the Finale – easy to hear what that represents). The trio of the Menuetto is scored predominantly for winds alone in the manner of a Serenade. But the main theme of the Allegretto (track 12) evokes Barberina’s Aria from Mozart’s Nozze – the words “me meschina” come to my lips as I listen to the music. In the symphony, composed circa 1773, Gossec uses the full forces that were at his disposal with the orchestra of the “Concerts Spirituels” back then, including timps, trumpets and clarinets. His use of the clarinets is very remarkable, as Mozart introduced them only in his own “Paris” symphony (1778) and Haydn only in the second set of London Symphonies (1793-95)

There aren’t many duplications in the recordings of Gossec’s symphonies, but Sinfonia La Caccia is one of them, since it has been recorded also by Concerto Köln (see link above). Both versions are enjoyable, with a touch more transparency in the sonics of Concerto Köln, more thickness with Sanderling’s Orchestre de Bretagne, but also, in the outer movements, fine colors of horns and clarinets. It isn’t that Concerto Köln’s instrumental colors lack pungency, but they are more in the manner of an etching as opposed to an oil painting. On the other hand their trumpets have more ring in the first movement and their horns sound more like hunting horns (which goes with a touch of “grayness”, together with the added rawness), those of Orchestre de Bretagne more like orchestral horns (and I guess that this is exactly what they are respectively). Tempos are similar in the outer movements, Concerto Köln plays with slightly more punch in the first movement but Orchestre de Bretagne isn’t lacking either, and it is the other way around in the Finale. There is more urgency and emotional turmoil in Concerto Köln’s approach to the Allegretto, more Mozartean despair in Sanderling’s. Concerto Köln here is probably truer to Gossec’s tempo indication (“Allegretto quasi allegro”), but the emotion is also beautiful at the more reined in tempo of Sanderling. The only moment where Sanderling disappoints is in the Menuetto, where he is impossibly thick and trudging – he tries to turn into grandiose, regal music what should have remained (and remains with Concerto Köln) hunting music, but he makes it only thick, bombastic and pompous. Fortunately the central wind trio retains plenty of character.

But the interesting thing is that both ensembles don’t play exactly the same thing, especially in the first movement. Concerto Köln plays exactly the version contained in Gossec’s manuscript, that Bibliothèque Nationale de France and the International Music Scores Library Project have made available online. Sanderling’s version on the other hand is a more complicated affair. There is a cryptic indication in the liner notes of the ASV CD that “the present recording takes the repeats on the Da capo, in addition to lending one to the exposition of the first movement”, and it isn’t even clear in the context that the phrase refers in fact to the first movement. What they have done is to re-open a 19-bar cut that Gossec made in his manuscript copy (it isn’t easily legible since it is heavily crossed out; Sanderling certainly plays that number of bars, but I’m not sure that the content of what he plays corresponds exactly to what Gossec wrote and then crossed out), which serves indeed as a kind of exposition repeat (though it doesn’t repeat exactly the exposition), There is, later on, another two-bar cut which they also reinstate. And then they apply an unprescribed da capo at 2:34. Sanderling also reinstates a small cut in the second movement and another one in the Menuetto and, more remarkable, reinstates there (in the wind trio, at 2:20) a crossed-out part originally for the two trumpets but which he attributes to the two horns, providing them with a a great solo – another example of a very welcome doctoring. There is also in the Finale an 8-bar coda which Gossec crossed out in favor of a repeat of the last six measures, and it is the crossed-out version that Sanderling plays.

I’m not complaining. Sanderling and his editors did the right thing. Their emendations are very skillfully done, you won’t perceive any “doctoring” if you don’t follow with score, and those reinstatements and repeats are very welcome. In fact, hearing Sanderling, I don’t understand why Gossec crossed out what he did.

I’ve called Gossec’s music “music for turning a blind eye to the impending collapse” – and when music is as seductive as that, frankly, I’ll happily choose the music and the collapse, rather than escaping the collapse and giving up the music. “Play on, give me excess of it!”. Maybe it wasn’t the free-masons that were responsible for the end of the Ancient Regime after all, but the mellifluous beauties of Gossec’s music, like the voice of the Sirens.