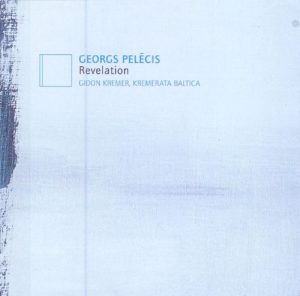 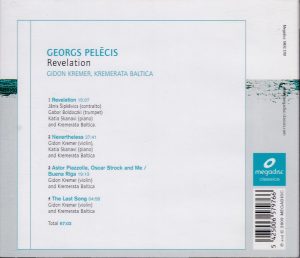 Having already heard Nevertheless, Pelēcis’ Double Concerto for violin and piano, in Kremer’s previous recording on Teldec, “From My Home”, I guess I knew what to expect: sentimental and sweet film music. Not that I’m attracted to that kind of music, it’s out of an interest for the label, the Belgian Megadisc Classics, really, that I bought the CD. Launched in 1992, Megadisc did great service by bringing to the attention of music lovers a whole array of composers from the, by then, ex-Soviet empire: some that had already had some recorded exposure in the West, like Silvestrov, but mostly some that didn’t, or not much – and, for the most of them, still don’t: Alexander Knaifel, Vladimir Tarnopolski (see my review of “Introduction to the Music of Vladimir Tarnopolski”), Tigran, Mansurian, Faradj Karajev, Alexander Wustin, Nikolai Korndorf, Alexander Rabinovitch, Avet Terterian, Alexander Rastakov, Rytis Mazulis, husband and wife Elena Firsova (The Mandelstam Cantatas) and Dmitri Smirnov (“An Introduction to Dmitri Smirnov”) – and Pelēcis, then. In particular, they were the first really to unearth the music of Shostakovich’s maverick student Galina Ustvolskaya, and if onlhy for that they deserve eternal gratitude.

And in truth, I had forgotten about the Pelēcis being featured on the competing Teldec disc, but by an extraordinary coincidence it was brought back to my memory by a comment posted under my none too enthusiastic review posted one Amazon, exactly when I had pulled this one out of my shelves to listen to it.

But, still, with all that, I didn’t expect Pelēcis to write the same kind of music as Michael Nyman or Philip Glass: repetitive, fresh, propulsive, jubilant Yet it’s what he does in Revelation. Also tonal, easy, sounding almost like joyous rap music, or like music for a kids choir, something like Pelēcis’ version of Britten’s The Little Sweep. The music could easily pass for absolutely corny, but it is so unabashedly so that I feel like a perverse attraction to it (and I like the music of Nyman also, sometimes). I like also what sounds to me as a total contradiction between the mood of the music – jubilant and facile, music for your kids’ show at the end of the year of elementary school – and what the piece is about. In the composer’s own words, “Revelation presents three soloists – a countertenor, a pianist and a trumpet-player – refusing to accept the familiar dreadful prophesies, preferring the promises of a realm of light and joy, in the New Jerusalem. The theme is divided into three parts: the last lines of he Revelation of Saint John, Gloria in Exelsis Deo and Hallelujah in Paradise”. Do I read a subtext here, Pelēcis talking about his refusal of “ugly” contemporary music, preferring the promises of a realm of light and joy in music in the style of Michael Nyman?

The rest is a it was expected to be: Nevertheless sweet, pretty and sentimental music, at times derivations of Chopin in the style of Richard Clayderman (that thing returns a lot in the double concerto), music for Elton John ballads, for a sentimental Hollywood romance (the moment of dreamy nostalgia, memories, hazy image, slow motion, gauze skirts rustling under the breeze), music that Yann Tiersen could have written, folk dances, moments that may hark back to late 19th and early 20th century English pastoralism – like Elgar, or Vaughan Williams’ The Lark Ascending. Sometimes the solo violin line even seems to want to reproduce that of Brahms’ Violin Concerto. In fact, just read what the composer says about it, and you can guess what’s in store: “this double concerto… reveals the importance of the psychological dimension in music. At the beginning of this piece, the piano plays in a minor key, in a state of permanent melancholy. The violin on the other hand, almost always in a major key swims in happiness and wants to convince his partner to join him there. For a long time he doesn’t manage it, and it is only after three violin solos, three passionate cadences, that the piano finally says “yes”. Because true happiness is happiness shared!” Am I incredibly cynical or is this incredibly corny? Probably both. Always, when I have multiple versions of a same work, I’ll do some comparative listening. Here, sorry, but I cringe. Anyway, given the underlying program of the concerto, I’m in no doubt that Kremer plays it with more conviction with his partner Latia Skanavi here than he did with Vadim Sacharov in 1997.

Pelēcis’ combined homage to Piazzola and Oskar Stork, track 3, is a mixture of symphonic tango (that’s the Piazzola part) and of more sentimental and crooning music with syrupy violins (Oskar Strock must be something like the Latvian Piazzola). 5 minutes of it might have been fun, nearly 20 seemed aimless. “The Last Song”, the last piece on the CD, a solo for violin and strings, is 5 minutes-long, and although it is in the same sentimental, brooding, nostalgic, melancholy vein as the double concerto, with the same echoes of early 20th century English pastoralism (Vaughan Williams’ Tallis Fantasia comes to mind), it’s a piece that can hold its own in the neo-simplistic trend illustrated by Pärt’s Fratres.

At least, and to his credit (I guess), Pelēcis is entirely unabashed about his aesthetic stance. He writes, in the liner notes (awkwardly translated to English, presumably from the German, by someone who obviously had only a vague understanding of German. When necessary I substitue my own): “I invite my listeners to be aware that the evolution of music has not only been a progression, but also a long sequence of losses. These losses are a painful memory to me and I cannot break away from them. I try to save and re-establish as much as I can. For the average listener, as indeed for me, the scope of classical music (from Monteverdi to Mahler) is a paradise that invites us into the most sumptuous realms that the mind of a composer can imagine. The imagination of a composer contemplates and rejoices in a certain ideal, that of sonic perfection in all its dimensions. Who then has chased composers from this Garden of Eden? I’m afraid that they’ve done it by their own decision [the liner notes’ translation of the German “auf eigene Faust” here is: “I rather fear that they have often escaped from their own master” This is senseless]. But I won’t let myself be chased away. So I remain there and I feel good. I see myself almost as a gardener, part guardian and part creator of pretty things in the musical paradise that belongs to all of us”.

So this is music for those who equate paradise and sentimental film music. De gustibus… But I’m afraid it’s not the flowers of paradise that Pelēcis is gardening, but cheap plastic avatars salvaged from dumps. TT 67 minutes, no complaint there – at least for those interested in that kind of music.