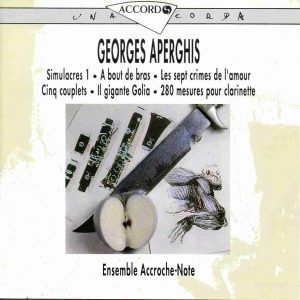 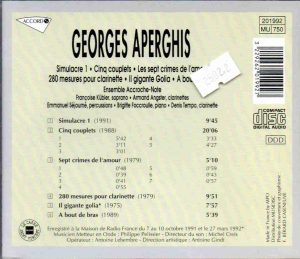 The instrumental and vocal theatre of Georges Aperghis
Originally posted on Amazon.com, 11 May 2015

Born in Athens, Greece in 1945, Georges Aperghis, like Xenakis, established early on in Paris France, at the age of 18. He was one of the inventors, in the early-1970s, of “théâtre musical” – music-theatre, or at least the French branch of it – and still remains today one of its main exponents. He is a composer much attracted not just to the human voice, but to the notion of playing with the voice, and exploring the bridges between speech and song. He’s also got a great sense of humor. His cycle of etudes for solo voice, Récitations, written for actress Martine Viard, is a tour-de-force of virtuosity and witty invention, although I’ve some reviewers of the (partial) recording of Viard less enthusiastic than I am – and I’m not surprised: Aperghis is never one to write for melodic beauty; rather, he metabolizes into theatrical vocalism all the noises, grunts, whispers, sighs, moans, panting that one will utter in everyday life. If you don’t perceive, as I do, the playful virtuosity, and even more the theatrics of it all, you’ll easily receive them as wanton excercises rapidly outstaying their welcome. Despite the liner notes’ contention that the pieces gathered on this disc belong to two different periods and styles of their composer, “more theatrical” in the earlier ones from the mid- to late 1970s, “more musical” in the latter from the late 1980s to early 1990s, music theatre and performance always lie at the heart of his compositions, even those that are purely instrumental.

In “Il gigante Golia” (The Giant Goliath) for voice, piano, clarinet and percussion from 1975 (track 5), the soprano sings words whose meaning seems less important than the purely acoustic value of its phonemes, and the accompanists also vocalize, chant and shout, sometimes in a rhythmic and sullen tone. “Sept crimes de l’amour” (Seven crimes of Love”, 1979, track 3) for soprano, clarinet and percussion, sounds like a scene out of one of Aperghis’ music theatre pieces, with the soprano panting as much as singing, biting off an apple at one point, the instrumentalists adding their own vocalizations to hers (a representation of shared orgasm I’d say), and the instruments, not just percussion but also clarinet, often producing percussive interjections rather than sustained melody, and at times what sounds like the babble of an infant. In performance there are also instructions about stage action, which of course we don’t get here, but the work sustains itself without them, as a piece of sonic theatre.

Jump then to the vocal pieces of a decade later: “Five Couplets” for soprano and clarinet from 1988 (track 2) and “Simulacre 1” for soprano, clarinet and percussion (1991 track 1) may mark, as the liner notes claim, “a culmination in the composer’s language”, and certainly he’s brought to bear his accumulated experience in writing for music theatre, making them very typical of the best he had to offer in those years. But, despite the liner notes’ contention that Five Couplets “should be considered as a long Lied”, the voice still utters syllables and phonemes (“Phonetic poetry” as the annotator aptly put it) rather than words important for their meaning as in a Lied (and the singer does pronounce actual words, they are machine-gunned so fast and whispering as to be almost incomprehensible), always blurring the frontier between spoken and sung voice; the clarinet often “clones” those vocalizations as if trying to turn itself into a voice, and, in “Simulacre”, the percussionist joins in his own theatrical vocalizations.

Thinking on it, I think the essence of the compositional art of Aperghis is that the elemental value of expression from speech is not the intellectual meaning conveyed by the words, but the emotive undertones of vocal sounds. In other words, speech stripped to its bare essentials is no more intellectual meaning, but the basic emotions conveyed by the human breath and exhalation.

But the theatre is also very present in the two pieces for clarinet(s), “280 Measures of Clarinet” from 1979, track 4, “A bout de bras” for two clarinets from a decade later, track 6 (hard to translate, this one, an expression meaning, literally, holding a heavy weight with you arms fully extended in front of you, with the lever effect to its maximum, and figuratively that someone is bearing the brunt of something or being alone to fight with the last energy for something). They too can be taken, if you are not well-disposed, as mere etudes using all the resources of contemporary clarinet performing techniques, grating and sometimes shrieking overtones, vocalizing while blowing, flutter-tonguing, barking – but I think they are best taken, again, as sonic theatre.

Accroche Note, formed in the early 1980s around soprano François Kübler and clarinetist Armand Angster, were in those years (almost a quarter-century ago!) close collaborators of Aperghis. Some of these pieces were written for them and the interpretations can be considered authoritative. Excellent and informative liner notes, on both the pieces and the composer, TT 59:42. The same program was reissued on a twofer which I don’t have, Accord 4761635 (2004), barcode 028947616351, with later recordings of Aperghis’ music by Accroche-note (from 2003), under the title “Simulacres”. 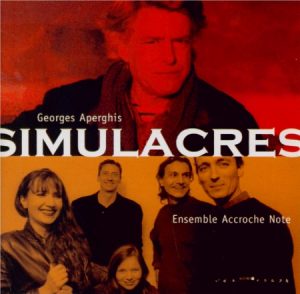 The works featured on the second CD are Simulacre III for soprano, 2 clarinets & marimba, Simulacre IV for bass clarinet, 4 pièces fébriles for marimba & piano, Trio for clarinet, cello & piano and “Monomanies” for solo voice. For the best introduction to Aperghis’ music theatre, go to Sextuor – L’Origine Des Especes. And see the summary of and links to my reviews of music of Aperghis, and the list of the CDs that I have but haven’t had time yet to hear and review