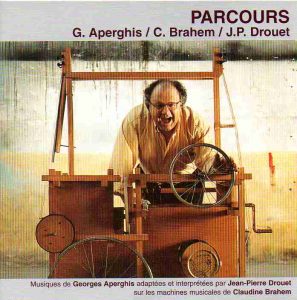 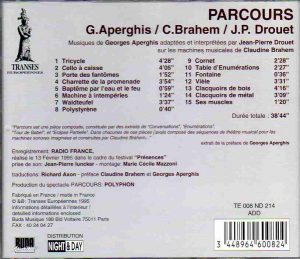 Arrived too late at the show, we are left with Aperghis’ usual antics
17 August 2016

The cover photo is not very explicit: “Parcours – G. Aperghis / C. Brahem / J.P. Drouet”. Pieces of Aperghis, Brahem and Drouet, you’d think, interpreted by Drouet, as suggested by the cover photo. But the subtitle on the backcover tells you the true story: “Musics of Georges Aperghis adapted and interpreted by Jean-Pierre Drouet on the musical machines of Claudine Brahem”.

Georges Aperghis is a Greek-French composer, born in 1945 but established in Paris since 1963, and one of the pioneers, in the 1970s, of “théâtre musical”. Percussionist (and composer) Jean-Pierre Drouet was long associated with him, and so was Claudine Brahem, a scenographer, who invented those wacky musical machines for the theatrical shows of Aperghis.

The pieces comprising “Parcours” (journey, course) are selected from various compositions of Aperghis, “Conversations”, “Enumérations”, “Babel Tower”, “Partial Eclipse”. Some were written specifically for the machines (and the machines built for the pieces), others were adapted by Drouet for machines created in other contexts. The music is typical Aperghis – invented language, onomatopoeia, shards of scientific texts delivered at light speed (track 12), various vocal sounds, panting, laughing, a recurring repeated “yes, yes, yes”, voice used not to convey meaning but as percussion together with the percussive sounds of the machines, the usual Aperghis antics. I’m a great fan of the composer, but as a presentation of Claudine Dehem and her machines found online says, “the musical machines were conceived, studied, built to be used in the contect of a stage. Each type of sound requires a specific gesture, rubbing, pulling, hitting, inserting, turning, with all those manipulations generating different postures and attitudes.” Evidently, all that is lost on disc, without the visual aspect. So what’s left are the antics, and the percussive sounds. Track 10, an ostinato of laughter accompanied by various sounds, is great even without the visuals, though: it reminded me of a great song by the French comedian singer Henri Salvador, “The Fugue in Laughs”, from the album “Henry Salvador s’amuse”, worthy of Berio’s A-Ronne. Still, listening to the CD is like having arrived too late at the show and hearing it behind the closed doors of the auditorium. Frustrating. TT is a scanty 38:30. If you want to get a real idea of what Parcours was, see these uploads of Zapo Babilee on YouTube, Parcours 1, Parcours 2, Parcours 3 and Parcours 4. I’m an Aperghis completist and am glad to have this rare disc in my collection, but it’s not the one I’d recommend for a first discovery of the composer. Go to Récitations, Sextuor, Die Hamletmaschine or Avis de Tempête for that. And see all my other reviews of works of Aperghis, and the CDs of his that I have but haven’t had time yet to hear and review.