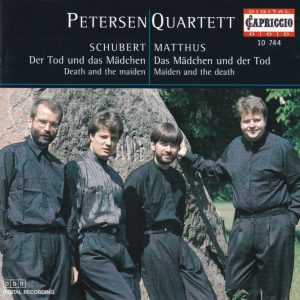 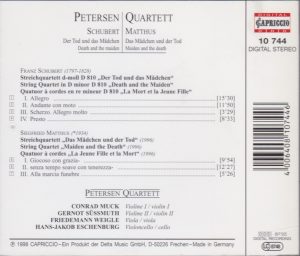 An adventurous pairing, an interpretation favoring the extremes
Originally posted on Amazon.com, 12 August 2006

Following the lead set by the Brodsky Quartet in its recording for Teldec of Schubert’s 14th quartet “Death and the Maiden” coupled with “Black Angels”, George Crumb’s quartet for amplified strings written in 1970 reaction to the Vietnam war, the Petersen Quartet has had the excellent idea to pair Schubert’s masterpiece with a string quartet composed on the same theme – called here “The Maiden and Death” – by Siegfried Matthus, one of the most prominent composers of former East-Germany, and dedicated to them.

In 1817 Schubert had composed a Lied on the poem by Matthias Claudius “Death and the Maiden”. In 1823, ill with syphilis and sensing the nearing of death, Schubert wrote number of his late masterpieces, including this string quartet. The second movement is a dirge-like theme taken from the Lied and used as the basis for five variations, giving the quartet its title. But the whole work can be heard as the conflict between Death and the Maiden it came to claim.

Matthus picks up the same concept, but contemporizes it by imagining Death under the more seductive and deceitful guise of drugs. The first movement exposes the theme of the Maiden, agitated, tensely lyrical with the violins in their upper register, and regularly interrupted by furious and dissonant onslaughts, representing Death claiming the Maiden. The movement leads directly to the next one, swaying, hesitant, evocative of a “bad trip”, in constant pianissimo whisper : the deceitful attraction of drugs. The last movement follows with a funeral march utilizing Schubert’s theme. But in the 10 last seconds a final brutal onslaught tops off the quartet: the ultimate triumph of grimacing Death.

In Schubert, the Petersen Quartet favors the extremes: extremes of tempo, which in the first three movements are the swiftest of all the versions I know; extremes of dynamics, from hushed pianissimos to explosive fortissimos; yet tone production, esp. of the 1st violin, remains remarkably clean and pure, even in the highest reaches. This tense, at times furious approach, which could appear contrived and forced, is entirely appropriate here: Death is not so genial, after all, and the Maiden might not be to happy to see it come for her. In the introductory Allegro, passed the initial explosive chords (Death?), the Petersens, unlike most other ensembles, do not linger on the 2nd, lyrical theme (the Maiden?), where Schubert wrote no such tempo change (1:53). In the 2nd movement, the Petersen Quartet follows faithfully Schubert’s tempo indication “Andante con moto”, resulting in a faster than customary tempo, and moreover they stick to it to the end, with great care on the details of phrasing and dynamics and an unfaltering purity of tone; the 3rd variation (5:38) is veritably furious; in the fifth (9:19) they don’t entirely respect Schubert’s written dynamics (calling for a crescendo only at the repeat), and they add an unwritten “sul ponticello” effect that is perfectly in situation. The Scherzo (3rd movement) is so “molto allegro” as to sound frenzied, and with that the Petersens are forced to slow down in the central trio (Schubert doesn’t instruct to do so) and do not avoid a degree of the customary mawkishness here (the Maiden?). After the first few bars which they legatoize a little too much, their finale is brisk and vehement, with marked dynamic contrasts.

This in an original and convincing disc.