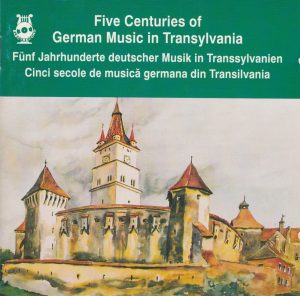 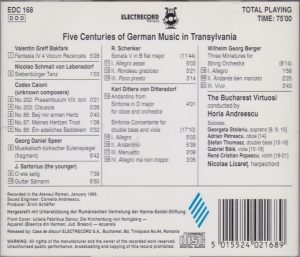 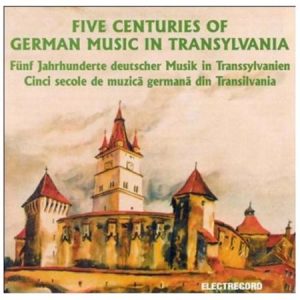 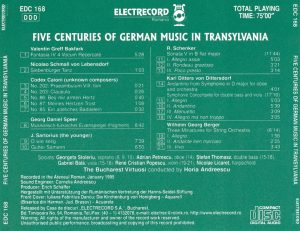 Many pleasures and some valuable discoveries,
Originally posted on Amazon.com, July 12, 2011

How I became interested in German music in Transylvania is a story too long  to be told here, but I half-heartedly browsed on Amazon, with no great expectation to find anything on that subject, and much to my surprise it yielded this CD from the Romanian label Electrecord. Well, again, I didn’t expect much from it, but it was cheap, so what had I to lose? In fact the disc provided many pleasures and some enjoyable surprises.

Transylvania is a historical region now in the North-West quadrant of Romania, best known by the wider public for its vampires, a breed now nearly extinct unfortunately, and shame on the International Union for Conservation of Nature and Natural Resources (IUCN) for not putting Dracula and his kins on the list of endangered species. As many regions of central Europe, Transylvania was subjected to the upheavals of history and – ok, I’ll shamelessly cut and paste Wikipedia here – “dominated by several different peoples and empires throughout its history” – and, shall I add, religions. It was Hungarian, then Ottoman, then part of the Habsburg empire, then Hungarian again, then Romanian, in 1918. Simultaneously and consequently, it was Christian, then Calvinist (and the Ottoman rule didn’t change anything to that – the Islamic Ottomans had a tradition of religious tolerance over their dominions), Lutherean, Unitarian, and back to Catholic (the Catholic Habsburgs obviously had NO tradition of religious tolerance).

Hence the presence of a German community in Transylvania, and the influence of German culture. As early as the 12th Century King Géza II of Hungary invited German colonists, known as the Transylvanian Saxons, to develop towns and cultivate the land of Transylvania. In 1211, at the invitation of King Andrew II of Hungary, the Teutonic Knights built, on the site of what was then the village of Brasov, at the southern border of Transylvania, the fortified city of Kronstadt to defend the border of Hungary (not the same city as the Kronstadt made famous in 1921 for its left-wing anti-bolshevik rebellion). Valentin Greff Bakfark, the first composer featured on the disc, was indeed born in Brasov in a family of saxon origin, and was possibly the first Transylvanian composer to be active outside of his country, as attested by the fact that he was published in Lyons (France) and died of the plague in Padua.

The compositions offered on the disc are presented chronologically. The earliest – from known or unknown 16th and early 17th Century composers – are modern transcriptions for brass of pieces originally for lute or organ. Not that I mind: it makes them sound like fanfares of Gabrieli, stark in the case of Barfark (track 1), more dance-inspired with von Lebensdorf (track 2), festal and solemn in the anonymous works from the Codex Caioni, a collection of pieces intabulated for the organ by the 17th Century Transylvania-born cleric Ioan Căianu.

Jump into the late 17th Century with the short excerpts from Georg Daniel Speeer’s collection of ballet music in various folk styles, Türckischer Eulenspiegel (after, I suppose, the famous prankster of German folklore Till Eulenspiegel). Speer was apparently a full German composer, born in Wroclaw in 1636 and died in Göppingen, Württemberg, in 1707; the liner notes are not entirely clear here, but the excerpts seem included because they draw their inspiration from Transylvanian folk music and were published under the pseudonym of Dacian Simplicissimus: Simplicius Simplicissimus was the famous picaresque character created by the novelist Grimmelhausen in 1668 to mock the horrors of the Thirty Years’ Wars, and the Dacians were the earliest recorded population of Romania, already mentioned by Herodotus. The music is run-of-the mill late 17th century, with lots of recitatives in the course of its short 8 minutes, and soprano Georgeta Stoleriu is a little thin-voiced.

Likewise, the two “dictums” of Johannes Sartorius Jr (born in Sibiu in 1712 and died in Brasov in 1787) are interesting more for their social significance than their sheer musical value. As the liner notes have it, a remarkable feature of sacred music in 18th-century Transylvania was the growth of the genre called “dictum” (or “Spruch” in German), in which a phrase of the Bible provides the basis of an aria whose musical parameters remain always melodic and simple, reflecting “a trend with the Evangelical church towards engaging the whole congregation in the practive of singing, even in rural areas, where performing abilities are modest”. Hundreds of such dicta by Andreas Teutsch (lyrics) and the two Johannes Sartorius, father and son, “found their way to worshippers all over Transylvania, in either manuscript or printed form”. The music is agreeable, lively, quite simple indeed, and you may be excused for thinking that Sartorius milks a little too much his theme in repeated 16th notes in “Gutter Sämann” (track 10). Nice harpsichord flourishes, though, that I think must be credited to harpsichordist Nicolae Licaret rather than to the composer. The arias might have made more of an impact if soprano Stoleriu had put a little more character and beef in them.

The Sonata of Schencker is better than that. R. (complete first name not given) Schencker is another Transylvania-born musician who made an international career, in the second half of the 18th Century, playing in Vienna, then Paris under the baton of Rameau and Gossec, alongside no other than Mozart according to the liner notes. The Sonata V is drawn from his collection of Six simphonies à trois parties published in Paris in 1762. It is lively and spirited, with fine themes, developped with craft. Here the sonata is played by the Bucharest Virtuosi, a chamber ensemble and they are fine, but I wonder how the sonata would sound one to a part.

If the disc is to give any clue, transylvanian music grew better as it aged. Karl (more often spelled Carl) Ditters von Dittersdorf was Austrian, but he is included here by dint of having worked as kapellmeister to the bishop of Oradea from 1765 to 1769, succeeding Michael Haydn who had held the post from 1757 to 1762, before leaving for Salzburg. It is not clear from the liner notes that the two pieces played here were actually composed during Dittersdorf tenure at Oradea, but anyway, they are lovely. The andantino for oboe and strings is the slow movement of a Symphony in D which I have not yet been able to identify in Dittersdorf’s catalog, among his many Sinfonias in D major [postscript from 10 May 2020: thanks to Balazs Locsei for indicating, in a comment posted under the cover image, that it comes from Dittersdorf’s Ovid Symphony No. 2 “The fall of Phaeton”], and it is in fact a beautiful slow movement of a concerto, to make one regret that Dittersdorf didn’t write the complete concerto, or that The Bucharest Virtuosi didn’t record the complete Symphony (the same movement was recorded by Lajos Lencsés, on Capriccio 10 484, “Obenkonzerte”, with concertos of Matthäus Nikolaus Stulick, Christoph Graupner and Christoph Förster, 1993, barcode 406408104841, but with no more precise identification). It’s the first time I hear the Sinfonia Concertante, for the rare combination of viola and double-bass, but a discographic check shows that it is, with the Concerto for harp in A major, one of Dittersdorf’s most popular work on disc, with numerous recordings dating back to the LP era and 1960s. See my Dittersdorf composer entry for a discography of the composition, and much more. Indeed, it is a splendid work and a real find, the dark hues of the two instruments giving the music an almost pre-brahmsian flavor. Frankly, this is a composition that deserves to be heard often in the concert hall. It would provide a welcome change from Haydn’s cello concertos and Mozart’s violin concertos, and is worthy of them. You wouldn’t know how good the work is if you knew it only from the competing recording on Supraphon, 11 0951 2, with Czech stalwarts Lubomír Malý and František Pošta – in fact, you’d likely find it excruciatingly boring. It’s terrible how an awful interpretation can kill a composition.

Jump into the 20th century and make another find with the music of Wilhelm Georg Berger (born in the county of Brasov in 1929 and died in Bucharest in 1993). The Three Miniatures of String Orchestra are light-hearted,  very lyrical, folk-inspired, evocative not so much of Bartok, a little more of Kodaly and Enescu, perhaps, but of Leo Weiner even more. They are charming and had Berger been born closer to the West, they’d be part of the standard repertoire of every pops orchestra in the world.

TT is 75 minutes and the disc has afforded many pleasures.