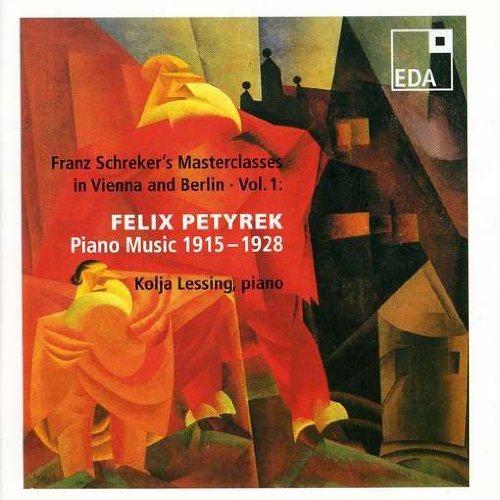 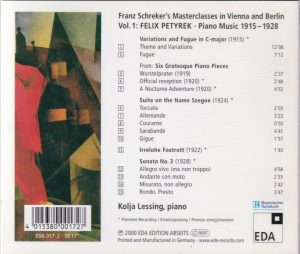 The welcome rediscovery of a forgotten composer from the 1920s, not always of striking individuality
Originally posted on Amazon.com, 9 April 2007

In the summer of 1922 (as he recalls in his (in)famous autobiography, which I’ve been reading as part of a thorough survey of his life and works), young George Antheil (he was born in 1900), the self-styled “Bad Boy of Music”, was picked up by the then famous American concert agent Martin Hanson and, after a successful opening concert at London’s Wigmore Hall, went on to Germany. There, he stopped at the first “First International Festival of Modern Music” in Donaueschningen, organized by the wealthy Prince of Fürstenberg – all expenses paid. He was hoping to meet there “practically every important musician of Europe”, thereby giving him a chance to introduce “an absolutely unknown young American pianist-composer upon them all at one fell swoop”. However, upon his arrival he was disappointed to discover that, instead of an “international” gathering, only composers and conductors from the Austrian-German area had responded to the invitation. So what he heard were concerts with works by “Berg, Petyrek, Webern, Krenek, Hindemith, Schöenberg, Rathaus”.

Berg, Webern, Schönberg, Hindemith, Krenek, fine: these are well-known quantities. Even the Polish Karol Rathaus has undergone something like a small rediscovery, thanks to the “Degenerate Music” fad of these last fifteen years (a search on Amazon.com yields over 10 results).

So I thought I’d investigate, and this is the one disc that a search yielded.

Felix Petyrek was born in 1892 in Brünn, Moravia, then part of the Austrian Empire (now Brno in the Czech Republic, also the birthplace of Janacek and Mies van der Rohe) and became a composition student of the then famous Franz Schreker at the Vienna Conservatory (also a teacher of Krenek, quarter-tone composer Alois Haba and Rathaus), while studying piano with Leopold Godowsky and Emil Sauer. After the 1st World War he came to be viewed as one of the main proponents of new music (both as a composer and a concert pianist), while holding various teaching positions (of piano, composition and theory) in Salzburg, Berlin, Athens, Stuttgart, Leipzig and Vienna, and getting closely associated with the Anthroposophical movement of Rudolf Steiner in Dornach, Switzerland. The rise of Nazism thwarted his career, worsened by his poor health, bouts of depression and dire financial situation. He died in Vienna in 1951 and fell into oblivion.

That said, the works gathered on this CD, all composed between 1915 and 1928 (and all premiere recordings but for one short piece), rarely show a composer of striking individuality. In their tribute paid to Bach, both the 1915 Variations and Fugue in C-major and 1924 Suite on the Name Szegoe show a strong affinity to the music of Max Reger. The 1922 Irrelohe Foxtrott is a short and unsubstantial take-off from the opera of Schreker, with whom Petyrek was by then estranged. The three (out of six) “Grostesques”, from 1919 and 1920 are much in the same mood, picturesque mocks of a Viennese Waltz in “Wurstelprater”, of the “Official Reception” of some “Highness” and of an unspecified “Nocturnal Adventure” (but with “howling” as one of the performance indications to give us a hint), sounding like the kind of parodies of “Bourgeois” music Hindemith or Satie composed at the same time. One regrets that Kolja Lessing didn’t record all six.

The compact (14′) 3rd Sonata from 1928 is a much more interesting and individual work. With its forward-moving, muscular march-like rhythms, the first movement evokes the War-Sonatas of Prokoviev (written some 15 years later, of course). The short (2:30) second movement, “Andante con moto”, features elaborate counterpoint with terse left-hand and enigmatic and fascinating right hand filigree. The third movement is another muscular, march-like movement, with a central section of striking originality, featuring a rapidly ascending and descending ostinato scale played staccato by the right hand. In the Rondo finale, the quasi clockwork melody kept in the piano’s high register again evokes some Prokoviev or even Bartok.

Born in 1961 in Germany, Kolja Lessing appears to be equally proficient at the piano and the violin (which is the instrument he teaches, now in Stuttgart, after Leipzig and Würzburg). He (for he is a “he”, as his personal name might not indicate) has been an active advocate of the rediscovery of forgotten composers from the first half of the 20th Century, Philipp Jarnach & Berthold Goldschmidt being the less obscure. He contributes himself the excellent and thoroughly informative program notes.