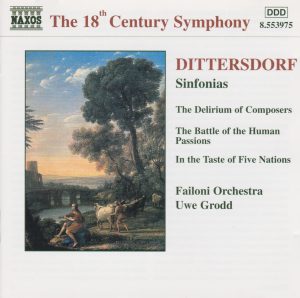 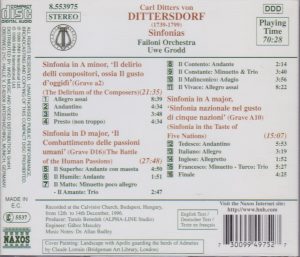 Worth the try
Originally posted on Amazon.com, August 23, 2011

I’m not all that familiar with Haydn’s 104 symphonies – I’m keeping them for my old age (I’d better not wait too long) – so I can’t answer for sure the question: why are Haydn’s so famous and oft-recorded, and not those of Dittersdorf? Certainly not a matter of quantity, since, according to the liner notes, the latter wrote “well over a hundred” (Dittersdorf’s Wikipedia entry states that there were “around 120 of them (…) with solid attribution”, with “about another 90 symphonies which may be Dittersdorf’s work”.  Maybe the very indeterminacy of the number provides part of the answer. Unlike Haydn, who more or less remained at the service of Prince Esterházy for all his life, Dittersdorf held a number of positions and apparently his symphonies were scattered in many places and with various publishers, with many left only in manuscript form.

Haydn was also famous and feted in his time, enough so that he never disappeared from the repertoire, even after his death. Not so with Dittersdorf, although he was also a recognized composer in his days.

Still, if it isn’t quantity, is it a problem of quality? Not on the basis of the three symphonies featured here. One very characteristic aspect of those three, more even than their programmatic nature, is their sense of humor and irony. The Symphony titled “The Delirium of Composers, or the Taste of Today” is apparently meant to be a spoof on the Sturm und Drang fad that seized many composers, including Haydn, in the late 1760s and early 1770s; The Symphony on “The Battle of the Human Passions” is in seven movements and depicts in music eight human passions, from pride to vivacity. Finally, each movement of the “National Symphony in the Taste of Five Nations” is an parody in music of the national styles of France, North Germany, Italy, England and Turkey. But there is more than just irony: the music is great, lively, inventive and entertaining, even in its parodic aspect. Back to my opening sentence then: I’m not all that familiar with Haydn’s 104 symphonies, but I find that these three samples of Dittersdorf are in no way inferior to what I know of Haydn’s.

I’d need to listen to alternative versions to assess for sure the interpretive merits of conductor Uwe Grodd. What I can say is that I recently listened to a recording of Dittersdorf Concertos by a Czech team, which I found incredibly boring (Supraphon  11 0951-2); on comparison with another interpretation which I had in my collection of one of these concertos (Five Centuries of German Music in Transylvania, Electrecord EDC 168), it appeared that the blame lay not on the composer and compositions, but on the interpreters: through their bored tempos and thick textures they made the music sound vaguely elegant in a bored and boring way, rather than lively, spirited and full of zest.

Well, I haven’t been bored hearing this recording of Uwe Grodd. Given the price, there is no big risk involved in giving this one a try. TT 70:28.