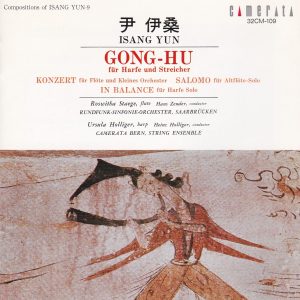 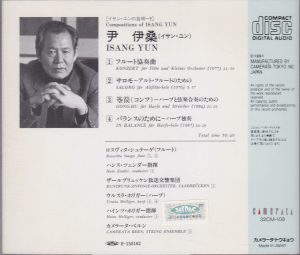 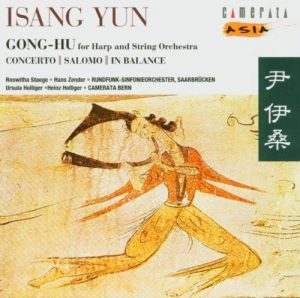 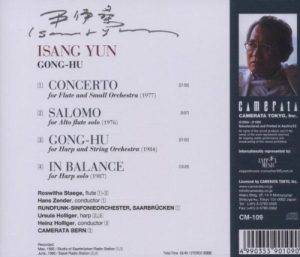 Among the most accessible and seductive compositions of Isang Yun
Originally posted on Amazon.com, 22 October 2011

The Japanese label Camerata did great service to the admirer of Yun’s music when they issued, between 1987 and 1997, an 11-volume survey of his music, a series called “Compositions of Isang Yun” (the last volume wasn’t numbered as part of the series and was only titled “Last works of Isang Yun”), and this is how I have them. In the early 2000s the reissued their Yun collection on a 9-CD series titled “The Art of Isang Yun”, and did some reshuffling on the occasion. In the original series, the pairings were rarely entirely consistent, mixing orchestral and chamber, and various performers. The reissued series is genre-centered, with orchestral works, concertos, chamber. Also, stacking the contents of the original eleven CDs on only nine, each offers more generous timings, almost always over 70 minutes, while those of the original series ran to about 60-minutes each.

This one then, 32CM-109, released in 1991, is volume 9 from the original series, Compositions of Isang Yun, with a TT of 59:49. Its various works have been dispatched on CMCD-50028 Art of Isang Yun 5 (Flute concerto, paired there with the Concertos for Clarinet and Cello, for a total of 72 minutes) and CMCD-50029 Art of Isang Yun 6 (the three other pieces, to which Loyang and Pièce concertante were added, TT 69 minutes). So, on the face of it, the reissues might seem like better propositions. Still, this volume 9 is one of the most seductive installments from the original series, gathering as it does some of Yun’s most easily accessible and mesmerizing compositions.

Yun always had a special compositional and emotional rapport with the flute, and composed many works for it. The flute is one of the two main instruments of Korean Court music, with the oboe named “Piri”, and it is also the instrument of folk music, and it always brought back to Yun memories of his childhood, when he would follow the itinerant folk musicians from village to village. The 1977 Flute Concerto is a work of extraordinary refinement, staging dreamily evocative or agitated melismata of the flute over a rich and mysterious palette of orchestral sounds – the concerto is inspired by a poem from the Korean Buddhist tradition, depicting the hallucinatory dream of a young girl seeing a handsome young man in the stone Buddha of a temple, and wildly dancing with it. And indeed Yun has composed dream music, brushes of softly tremulating strings, flurries of orchestral flute and oboe, soft punctuations of woodblocks, gongs or celesta, outbursts of horns. The flautist plays alto flute in the outward sections and the big flute in the middle section.

I have in my collection another version to which to compare this one, by Pierre-Yves Artaud and the French contemporary ensemble 2e2m under Paul Mefano, on Adda 581166 (1990). Because Mefano’s orchestral is smaller – a chamber orchestra, really, with string quartet and double bass – it has less refinement but more instrumental pungency (especially the horns and celesta and other percussion), conveys more the sense of a real chamber-music dialogue between flute and other solo instruments, rather than a concertante flute standing single against the orchestra. Camerata’s flautist Roswita Swaege is very present, which is fine for concentrating on the details but sounds somewhat artificial, and there is some tape hiss present in the softer passages. But Zender has the lusher carpet of strings, the greater refinement of sound and Yun’s music demands it, so ultimately this is the version I prefer.

If possible, Gong-Hu, a concerto in all but name for harp and strings, is even more seductive. Even the Flute Concerto can have its thorny outbursts, the Harp Concerto is all mellifluous, and Yun has a special touch both with the harp and with string writing. The composer enshrines the harp embroidery into a tapestry of lush string melismata, often pitched in the high registers, conveying an impression of extraordinary refinement. Gong-Hu (in Chinese K’ung hu) is the Korean name for the traditional harp. As an instrument reserved to women it appears, in Korean folk lore, as the expression of longing for the distant lover. The Concerto was composed at the behest of harpist Ursula Holliger who plays it here with the same performers as on the Premiere, Camerata Bern under her husband Heinz’ baton, and if the production info given on the disc is correct, then the recording was made in June, two months BEFORE the premiere on August 22, 1985. I’m doubtful, though, as the recording date for the solo harp piece, “In Balance”, is also said to have been June 1985, but the piece was, according to the liner notes, composed in 1987 and premiered on April 8 of the same year. Anyway, the interpretation bears the stamp of authority.

The two fillers are well chosen and fitting: Salomo is a piece for solo alto flute that starts a semi-tone higher than the last note of the Concerto, in the same hushed dynamics, making you think you were hearing a cadenza in form of a coda. It is an enlarged excerpt from the Cantata “The Wise Man” from 1977, on words attributed to King Solomon and verses of Lao-Tse. It goes from the meditative to the agitated and has a shamanistic feel to it as in Jolivet’s Incantations, but the timbral palette of the alto-flute isn’t so varied.  Staege plays it with more roundness and a more mellow tone than the more forceful Machiko Takahashi on Attacca Babel, but the close recording pickup exposes at times the huge vibrating lack of homogeneity of her tonal production – you can really hear the dynamic oscillations of  the sound emanating from her instrument. In Balance for harp solo on the other hand is, like Gong-Hu, constantly mellifluous. If ever the word “beautiful” was deserved… Its fascinating atmospheres irresistibly brought Britten to mind – another great servant of the harp. It was written for and premiered by Ursula Holliger, who plays it here. It should be standard repertoire of every harpist, and if they want to bring down the house, let them finish their concert with it.

The original German liner notes were translated by someone who was obviously more fluent in German than in English, and both were obviously typed by someone who didn’t know either language. Without referring to the German I’m not sure you’ll understand from the indication that “there also can be a string quintet casring” (their typo not mine), that the Concerto for Harp and strings can also be played in a version of harp and string quintet. Worse still, good luck for making sense of the phrase “It was premiered on August 22nd, 1985 at the International Music Festival Lucerne with than Yun’s First Violin Concerto and the First Symphony being forms of development with enclosed movements, the small harp concerto presents three merging parts”. Sure, it should have read: “…Lucerne International Music Festival  with Camerata Bern under Heinz Holliger. Contrary to Yun’s First VC and 1st Symphony, forms of development with self-enclosed movements, the small harp concerto…”. Oh well, we’re not buying CDs for the liner notes, are we.