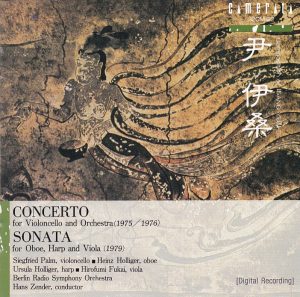 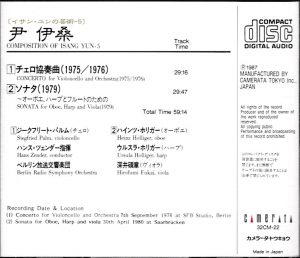 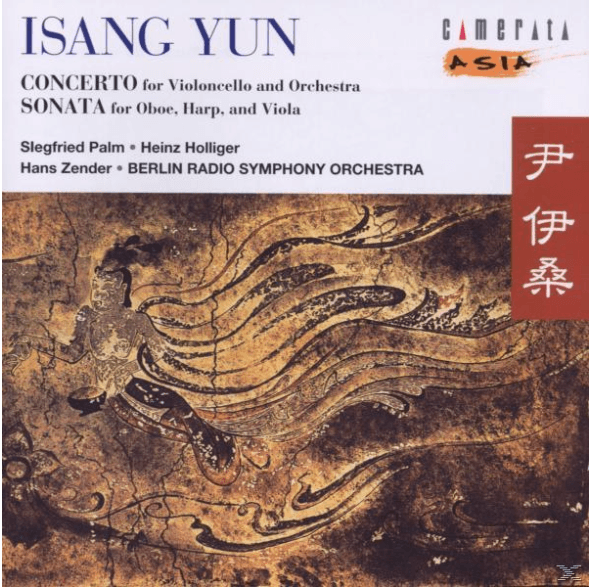 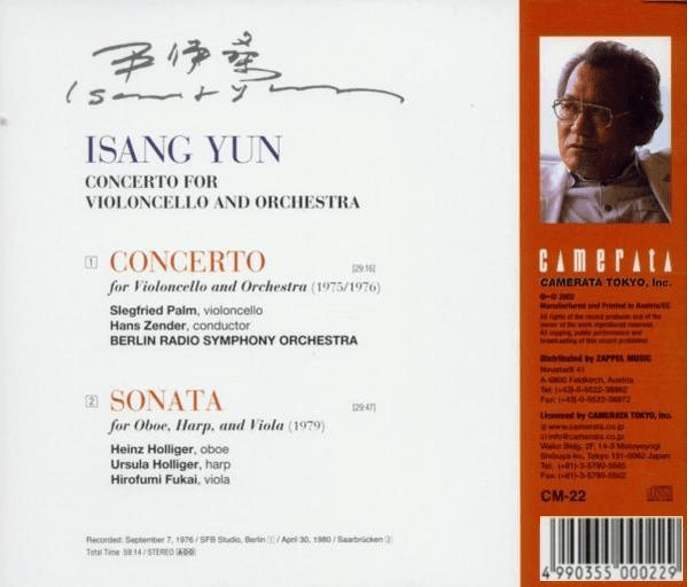 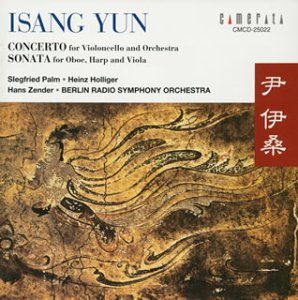 The Japanese label Camerata did great service to the admirer of Yun’s music when they issued, between 1987 and 1997, an 11-volume survey of his music, a series called “Compositions of Isang Yun” (the last volume wasn’t numbered as part of the series and was only titled “Last works of Isang Yun”), and this is how I have them. In the early 2000s the reissued their Yun collection on a 9-CD series titled “The Art of Isang Yun”, and did some reshuffling on the occasion. This one then is 32CM-22, part of the original batch, volume 5. In the original series, the pairings were rarely entirely consistent, mixing orchestral and chamber, and various performers, and this one is a good case in point. The reissued series is genre-centered, with orchestral works, concertos, chamber. Consequently, the Concerto has been sent to Art of Isang Yun 5 – Concerto II, with the Concertos for Clarinet and flute, and the Sonata to The Art of Isang Yun vol. 8: Chamber Music III. For the complete Camerata series, old and new, and the correspondances between both, see my Isang Yun introductory page. One advantage of the reissue series was also that, stacking the contents of the original eleven CDs on only nine, each offered more generous timings. The two discs on which these two compositions have been dispatched total 73 and 76 minutes. Nonetheless, at nearly 60-minutes, this one was one of the most generous of the original series, and is nothing to complain about.

The Cello Concerto, written in 1975/6 for Siegried Palm who plays it here, is a powerful, angry work, with vehement utterances from the cello interrupted or underpinned by violent orchestral outbursts, with some poetic, bird-like woodwind trilling – a typical Yun gesture – buried deep in the texture. The Concerto does go through more appeased moments, although always with an underlying tension and sense of pent-up menace. Other typical gestures of Yun are the quarter tone string glissandos you can hear between 4 and 7:00, or the delicately tinkering bells over high-pitched string tremolos at 11:40 announcing a new outburst, or again the ghostly tapestry of string glissandos at 23:30.

Siegfried Palm is the work’s dedicatee (“In Friendship”) and premiere performer, so his recording (made six months after the 1976 premiere in Royan) carries a unique aura of authority. There’s been a new recording of it, made in 2001 by Jens Peter Maintz and Stefan Asbury on Capriccio 67062, barcode 4006408670629. There is little to choose between both recordings, and the 2001 sonics do not radically tip the scales in favor of the new one. In fact, the cello is given a more forward placement in 1976, which makes no great difference in the numerous solo passages but affords it greater presence in the tutti, where Maintz’ instrument is more embedded into the orchestra. But Maintz has a fuller tone than Palm, especially in his pizzicati (as in the long passage starting at 4:22 – 4:18 with Palm) On the other hand, other than the flutes, slightly more vivid with Camerata (and they always have an important role with Yun), Asbury’s Deutsches Symphonie-Orchestra of Berlin has more presence, with better stereo separation of 1st and 2nd violins (important in the soft passage at 4:37/4:33), more vivid and impactful timpani (for instance in the violent outbursts at 8:10/8:13 and after), more color in the mysterious tinkering of glockenspiel and celesta at 11:24/11:43. But these are minute details that require careful comparative listening.

The Sonata for oboe, harp and viola from 1979 was also written for the performers who play it here, Heinz and Ursula Holliger (joined by violist Hirofumi Fukai), in a vivid recording made in 1980, less than a year after the premiere. It is a very typical Yun composition in that the three instruments are associated with characters and the piece conveys a loose underlying story (another such piece is Images for flute, oboe, violin and cello, found on Compositions-4, and  now on Art-8 where it is paired with the Sonata). Here, the  oboe, symbolizing (as in Images) the “male Yang-principle”, wooing the harp-female-Yin;  we are not told what the viola is supposed to be, but playing by ear he certainly sounds like the second suitor. Not that the “story” really matters, but still, as in and perhaps even more even than in Images, you can hear that the instruments are the actors of that ballet and that their melodic lines are their actions and trajectories, and those chamber pieces of Yun can really be called instrumental theatre. The music is very busy and full of ear-catching events, glissandos, trills, pizzicati, quarter-tone slides, harmonics, col legno, flutter tonguing; there is even, at one point in the middle movement, a change from oboe to the sweeter oboe d’amore while the harpist weaves a silk shawl between the strings to make the tone harder – but frankly, even having read about it, I couldn’t hear the difference (I think it happens at 17:59, but I wouldn’t stake my hand on it). Yet, despite some moments in the slow movement that are quite sensuous and even pretty at times, the music isn’t as seductive as in Images. There may be too much theatre and conflict, and not enough of those uniquely mesmerizing melodies and sonic inventions of Yun that are so much in evidence in the other piece. The Sonata is in three movements, none are cued here, tentatively I think the slow movement starts at 9:44 and the finale at 24:22.

It’s probably a better choice to go to the Art reissues, volume 5 for the concertos and volume 8 for the chamber music pieces. There, Riul and Piri are tough nuts, but Images is a great piece. If you don’t want to be a Yun completist, then adding to Art-5 (Concertos for cello, flute and clarinet), Compositions-4 where Images is paired with the Double Concerto for oboe and harp, is also a good choice, and one that will entail no duplication.