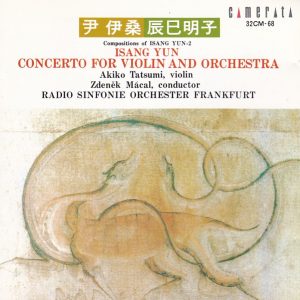 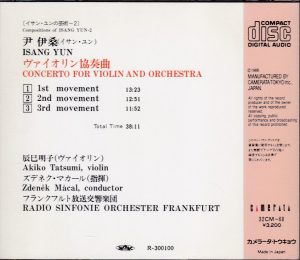 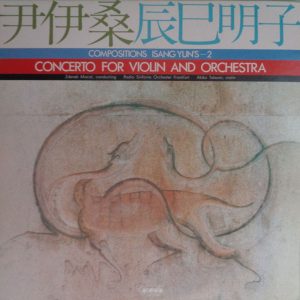 The unique voice of Isang Yun: a work of great sweep and extraordinary refinement
30 August 2016

Well, I hope it doesn’t last too long, because Yun was one, in my opinion, of the greatest and most original composers of the second half of the 20th Century, especially in his later years when he let his lyrical vein take over. Yun’s early works are rooted in the most thorny and gnarled style of the German avant-garde of the time, but in the early 1980s he invented a unique and uniquely beautiful style, combining those advances of the avant-garde and the melismatic traditions of Chinese and Korean Court music. A lot of his music then takes place in the upper reaches, often sounding like some wild aviary from outer space. His music is never “easy-listening”, saccharine and sentimental as it often is with the neo-tonal, neo-simplistic, neo-mystical minimalist composers that carved a niche in the 1980s and 1990s, but if you have the ear to hear it, it is achingly beautiful, all the more so as its lyricism is entirely exotic.

The Japanese label Camerata did great service to the admirer of Yun’s music when they issued, between 1987 and 1997, an 11-volume survey of his music, a series called “Compositions of Isang Yun” (the last volume wasn’t numbered as part of the series and was only titled “Last works of Isang Yun”), and this is how I have them. In 2009 they reissued their Yun collection on a 9-CD series titled “The Art of Isang Yun”, and did some reshuffling on the occasion. In the original series, the pairings were rarely entirely consistent, mixing orchestral and chamber, and various performers. The reissued series is genre-centered, with three volumes of orchestral, two volumes of concertos, and the remainder of chamber and instrumental music. Also, stacking the contents of the original eleven CDs on only nine, each offers more generous timings, almost always over 70 minutes, while those of the original series ran to about 60-minutes each, sometimes even less.

The CD at hand, Compositions volume 2, is a good case in point. Although the Violin Concerto, from 1981, is an extended work, running 38 minutes, which may have been fine when it was originally released on LP, it makes for a very short CD. It was reissued on “Art of Isang Yun-4”, now paired with the Double Concerto for Oboe and Harp, from “Compositions-4” (where it was coupled with “Images” for Flute, Oboe, Violin and Cello, sent to “Art-8”). It is a work of great sweep (try the orchestral surge at 1:27 into the first movement and again at 4:32), searing dramatic intensity, extraordinary refinement of textures (as in the ensuing harp-introduced moment at 1:43, with the hushed tapestry of orchestral violins in the stratosphere, or in the gossamer touches of celesta in the second movement at 3:20) and immense lyricism. Orchestral events seem to be sprouting everywhere, always with great coloristic invention, always melismatic even if it is a non-tonal, exotic kind of songfulness. Typical of Yun are also the gushing and pulsating woodwind tremolos (try 2nd movement at 3:51 and rising to a searing climax around 6:30), and the indefatigable gamboling of the violin it its highest registers, its continuous melismatic flow of upward and downward slides, tremolos and trills, the intense, throbbing lyrical lines of the second movement. More surprising, but equally taking, is the triumphant ending.

Given the CD’s short TT, better go to the reissue on Art of Isang Yun. Notwithstanding, this is a great piece and Yun’s two other Violin Concertos, from 1986 and 1992, BEG for a recording. Klaus Heymann of Naxos, please read this review and take note!