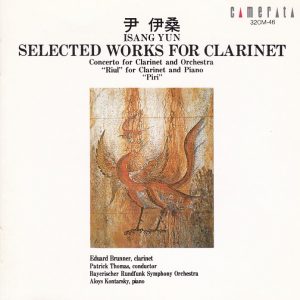 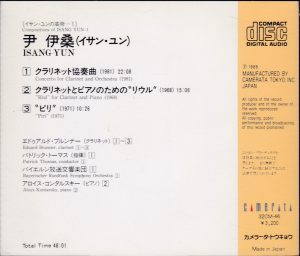 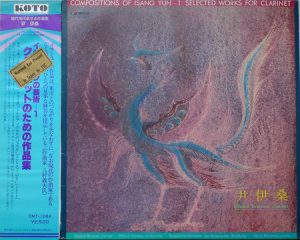 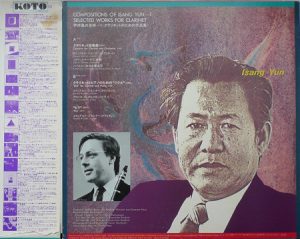 Not Yun’s most accessible and seductive compositions
Originally posted on Amazon.com, 14 July 2011

The Japanese label Camerata did great service to the admirer of Yun’s music when they issued, between 1987 and 1997, an 11-volume survey of his music, a series called “Compositions of Isang Yun” (the last volume wasn’t numbered as part of the series and was only titled “Last works of Isang Yun”), and this is how I have them. In the early 2000s they reissued their Yun collection on a 9-CD series titled “The Art of Isang Yun”, and did some reshuffling on the occasion. In the original series, the pairings were rarely entirely consistent, mixing orchestral and chamber, and various performers. The reissued series is genre-centered, with three volumes of orchestral, two volumes of concertos, and the remainer of chamber and instrumental music. Also, stacking the contents of the original eleven CDs on only nine, each offers more generous timings, almost always over 70 minutes, while those of the original series ran to about 60-minutes each.

The present issue, 32CM-46, is in fact volume 1 of the earlier series (although the series wasn’t published, at least on CD, in its numbering order, volumes 5, with the Concerto for Violoncello and Sonata for Oboe, Harp and Viola, and vol. 6 with Symphony No. 1 and Loyang for Chamber Ensemble coming out first in 1987, and this one and volume 2, with the Violin Concerto No. 1, being released only in 1988). But this one is a notable exception to the ealier series’ rule of mixing compositions of different genres, being entirely centered around the clarinet and clarinetist Eduard Brunner. Its contents were dispatched on one of the Concerto discs from the new series, Art of Isang Yun vol. 5, with the Concertos for Flute and for Cello, and on one of the Chamber Music discs, Art of Isang Yun vol. 8: Chamber Music III, with two other chamber music pieces. It’s from the back cover photos of those two reissues that I got the recording dates: they are not indicated on the original CD, or if they are, it’s in Japanese and I can’t decipher it. That original CD is also very short in its timing: only 48 minutes: the Concerto reissue is circa 74 and the Chamber Music reissue, 76.

That said, other than timing considerations, this is possibly not the best place to start if you are first approaching Yun, and not the most accessible, melismatic and seductive of his compositions. The fascinating aspect with Yun is that, while never relinquishing the composition exigencies of a composer steeped in the avant-garde of the 1960s and 70s, he let himself be influenced by the unique melodic and harmonic turns of Korean Court music,  resulting in music that is intensely lyrical and mesmerizing in its sonic invention, with highly ornate melismata often confined in the instruments’ highest registers.

There is a some of that in the concerto, but usually in a violent and strident mode rather than a poetically evocative one. There’s a wealth of instrumental events, melodic lines from the orchestra wildly sprouting all over the place, but the clarinet is generally strident and aggressive, the orchestra mostly violent and pounding. None of this is meant as a criticism, the Concerto is very powerful and not likely to ruffle the feathers of listeners versed in cutting edge contemporary music, but this is not where they will meet Yun at his most unique and melodically fascinating. This appears to be the live recording from the premiere in 1982, but you do not know that it is live until the final applause erupts.

Riul and Piri do not make it more accessible. Riul for clarinet and piano was one of the three compositions – with Images for flute, oboe, violin and cello, and the one-act opera “Butterfly Widow” – that Yun worked on when he was allowed to resume composition in 1968. In 1967, a South-Korean established in Berlin and a political opponent (South Korea was back then a dictatorial regime) actively advocating the reunification of both Koreas, Yun was kidnapped in Berlin by the South Korean secret police, taken to Seoul, tortured, condemned for espionage and sentenced to life imprisonment. In the face of the international protestation the Korean Government eventually released and exiled him, and Yun never returned to Korea. Riul is a tough nut, with a percussive piano and an aggressive clarinet. Although Yun says that it was his “intention here to show the melodic character as a continually fluctuating element”, with the clarinet continually repeating the basic melodic line in search for a central point, and having reached it, passing on to a new phrase, in search for yet another point, there is, again, little of the fascinating melodic invention and sound world displayed in his most typical compositions – including the contemporary “Images”. This sound to me like anybody’s aggressive “contemporary music” from the 1960s and 1970s, and is not what makes me so enthusiastic with the music of Yun.

Likewise with Piri, originally written for solo oboe, in 1971, for the oboist Georg Meerwein who had been active in the protestation to let Yun go (the Piri being the double reed instrument, similar to the oboe, used in folk and court music of Korea). Eduard Brunner, who plays it here on the clarinet (a tone below the oboe), gave the premiere on that instrument, but we are are not told when. It is not the most palatable of Yun’s compositions. A solo clarinet (as any solo woodwind) is already a fairly difficult instrument, if only because its polyphonic abilities are limited, and contemporary composers have felt compelled to invent new performing techniques, new modes of tone production and new sounds – and rarely mellifluous ones – as if to make up for the instrument’s relatively limited scope. In Piri, Yun is no different, and while I’m sure it’s an exciting piece for oboists and clarinetists to play because of is constant use of those extended techniques, quarter-tone glissandos, overtones and multiphonics, it’s not such a riveting work to hear: when the clarinet doesn’t intone long, hushed notes (and Brunner plays beautiful pianissimi, coming from the threshold of silence) that don’t really connect into a melody, it tends to shriek. In fact, reading the disc’s liner notes after having written this, I see that Yun admits to that much: “In contrast to the melodic types of his earlier pieces, the individual melodic lines, although similar to one another, are less melismatic. In this piece these melodic lines are placed one after another and then begin opening up to exploit vast spaces”. Yun also writes that “the theme of the piece represents a convict confined in a prison and suggest that although he is physically held captive, his spirit and thoughts are free to wonder far and wide”. OK, but then I guess you can’t expect his thoughts to be entirely melodious and poetic. Brunner made two other recordings,  on Col Legno AI 31 808 CD (recorded in 1987), and on a clarinet recital, “Dal Niente”, on ECM New Series 1599, barcode 028945325729, with works of Stravinsky, Boulez, Lachenmann, Stockhausen, Scelsi (1997). I have the Col Legno disc and the two intepretations are very similar. You can also hear Piri in its original guise played by Heinz Holliger, whose most easily accessible among his three recordings, and the most spacious, is also on ECM, New Series 1848/49, a 2-CD set titled “Lauds and Lamentations: Music of Elliott Carter and Isang Yun”, barcode 028947278726. I tend to prefer the oboe version, because of the instrument’s uniquely nasal timbre which evokes better than the clarinet a folk instrument from the far-East, and also because Holliger’s very spacious reading has more of a ritualistic feel to it, like distant memories of Greek (or Korean) mythology.

This one is best reserved to the seasoned Yun admirer. It originally came out without barcode (that’s how I have it), but it is listed on commercial websites under the two barcodes indicated above.