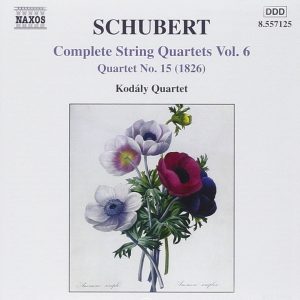 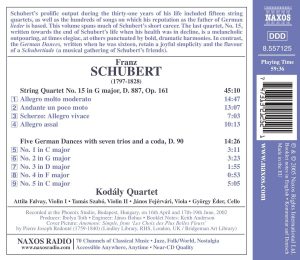 Often expressive and dramatic, at times a little plodding and not too concerned with architectural coherence
Originally posted on Amazon.com, 13 August 2006

In the 6th volume of its complete traversal of Schubert’s compositions for string quartet on Naxos, the Kodály Quartet brings together the great quartet opus 161, one of the last works in Schubert’s desperately short life and one of his most poignant compositions, and an early rarity, written when he was 16, the 5 German Dances D. 90. The latter is written in a typically “galant” style, with no great depth but full of charm. But the big nut on this CD is of course the 15th quartet.

In the first movement “Allegro molto moderato”, the Kodály Quartet is quite dramatic, very attentive to the movement diverse moods, from harrowing vehemence to hushed mystery, and nicely retains the dance-like lilt of the second theme; there is a price to pay, however, in the multiplication of tempo transitions, none of them prescribed by Schubert: one senses musicians interested in immediate dramatic impact rather than architectural coherence. The second movement “Andante un poco moto” is taken by the Kodály quartet at a very deliberate, not very “motorized” tempo (almost as slow as the Quartetto Italiano in their recording from 1976), making it sound more like an Adagio in plaintive tone, almost a funeral march, with accents that evoke not so much cries of revolt or pain as moans; the approach is effective in its own way, but it is not exactly what Schubert wrote. And here again, in the more animated passages, the Kodálys do not hesitate to perceptibly accelerate tempo; Quartetto Italiano was more consistent in that respect.

Under the Kodály’s bows, the Scherzo’s “Allegro vivace” (3rd movement) is not particularly vivacious, but nonetheless sufficiently light and full of bounce, as befits this musical invention which suggests the bumblebee’s flight or the butterfly’s flutter (and the elve’s dance will do, too). The middle trio however is rather mawkish, and again the Kodálys imperceptibly speed up their tempo in the second part. Their Finale is somewhat disappointing, due to a tempo that is too deliberate to evoke the race to the abyss that others conjure (Gidon Kremer and friends on Sony take as much time to get through the movement – but with the repeat) and, while the ensemble’s tone production until then had been not exceptional but unexceptionable, the 1st violin becomes a bit sour in its upper registers.

Not an exceptional version then, but one that remains very acceptable if you can find it for really cheap on the marketplace.