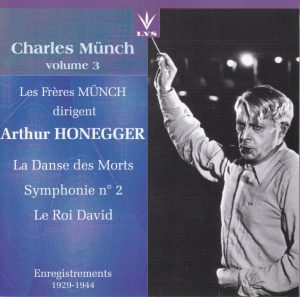 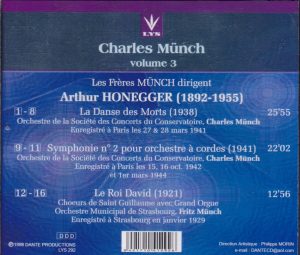 There is a better reissue, and there is now a better Munch version of the extraordinary Danse des Morts
originally posted on Amazon.com, 19 March 2013. substantially modified (in form, not content) for this re-post, 3 February 2018

These recordings of Honegger’s La Danse des Morts and the Second Symphony for strings and trumpet were essential recording premieres when they came out in France during the war or right after and, in the case of La Danse des Morts, it remained so for years after. Honegger was in those days at the apex of his fame and, although a Swiss citizen, viewed as one of the greatest French living composers  (but his standing and reputation would rapidly wane after the war, leaving him very embittered and depressed), and although his Swiss citizenship would have enabled him to spend the occupation snugly sheltered in Switzerland, he chose to remain in France and share the hardhips of the occupied French. Munch was then also an indisputable champion of the composer (I wonder why Dante insisted on typing his name “Münch”, which turns him into a German conductor, something that  the Alsatian conductor conspicuously refused to be) and he had total legitimacy in that repertoire. The recordings were made shortly after works’ respective premiere: both were comissioned and first-performed in Switzerland by Paul Sacher (La Danse des Morts on March 2, 1940 and Symphony on 18 May 1942), but their French premieres were given by Munch in Paris (26 January 1941 for La Danse des Morts and 25 June 1942 for the Symphony).

And they were great versions too, although Munch later better himself in his subsequent studio recordings of the Symphony, with the Boston Symphony Orchestra in March 1953 (first CD reissue in 1991 on RCA GD60685 with Symphony No. 5 and Milhaud’s Suite provençale  and La Création du Monde)  and with Orchestre de Paris in 1967, with much improved sonics and (especially in Boston) even more fire and bite than what conductor had demanded or obtained of Orchestre de la Société des Concerts du Conservatoires. In view particularly of these later studio recordings, this first essay would be of interest only to diehard collectors. So it is really La Danse des Morts that was the main reason for the Honegger afficionado to acquire these recordings. It is a hugely powerful work and the recording benefits from the total commitment of all those involved, the nobilit of tone of Charles Panzera, the vocal beauty of soprano Odetta Turba-Rabier, but above all from speaker Jean-Louis Barrault’s halucinated delivery, unapproached in any of the recordings made after (in fact very few were made, and my guess is that it is because everybody felt that Jean-Louis Barrault was unapproachable).

Still, as irreplaceable (and irreplaced) as was Jean-Louis Barrault in that recording (or rather, precisely because of that), the 1941 recording entailed its share of frustrations. The 1941 sonics are frustratingly limited, such a powerful work calls for wide stereo, here countless details of the orchestration must be imagined rather than heard and the words sung by the chorus are often incomprehensible (poet Paul Claudel doesn’t always use your familiar French vocabulary either). There are cuts also – including a substantial one between tracks 6 (`The Response of God”) and 7 (“Hope in the Cross”).

But the situation has been radically changed in 2007, when the invaluable Canadian label West Hill Radio Archives published a 7-CD set of live recordings of “Charles Munch in Boston: The Early Years”, WHRA 6015, which includes a live performance of La Danse des Morts from December 1952. It is even better than Munch’s studio recording. The speaker, Arnold Moss, delivers Claudel’s text with a more than acceptable French accent and he may not have the dramatic impact of Barrault, but he’s not far behind. The sonics are exceptionally good for the vintage, letting you vividly hear all those orchestral details that were inaudible in the 1941 recording – and the version is uncut. Now THIS is the version of La Danse des Morts to have in your collection, and it alone makes the purchase of the complete set worthwhile. The earlier studio recording is now no more than a historical document for the Honegger completist.

At the end of the LP era EMI France reissued this pairing of Danse des Morts and Symphony No. 2 on their “References” collection, but they let it lapse in the CD era (at least in the West; there was a Japanese reissue from 1991, 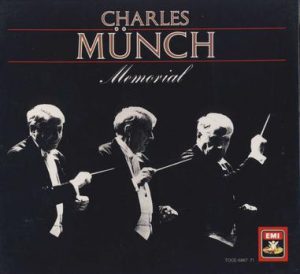 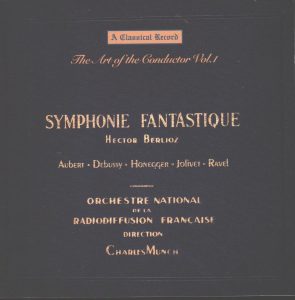 A Classical Record was the first to reissue the two recordings, in 1997, ACR on 40/41. After Dante (released in 1998), the Swiss label Cascavelle reissued the same pairing in 2005 on Vel 3060, “La France résistante”, although complemented not with the excerpts from King David conducted by Charles’ brother Fritz Munch, but with André Jolivet’s Les Trois Complaintes du Soldat with Pierre Bernac (a recording that was included in the 1997 set from A Classical Record, and was also reissued by Dante on an another CD, a Pierre Bernac collection, Dante Lys 514).

In fact both the Dante and Cascavelle editions appear to have been masterminded by the same person, French radio host and specialist of “vieilles cires” (old shellacs), Philippe Morin, and some of the photos of the Dante booklet reappear in Cascavelle’s, even the typo error that has the 2nd Symphony premiered by Paul Sacher’s Collegium Musieum of Zürich – it should be Collegium MusiCum. That said, the sonics of Danse des Morts have slightly more presence and clarity on Cascavelle. On the other hand, I can’t detect much significant sonic differences in the Symphony, and if there is, it is in favor of Dante, if only because the volume is slightly higher. But the main difference is the filler, an all-Honegger program on Dante with 12 minutes of excerpts from the third part of Le Roi David conducted by Fritz Munch in 1929, an all-Charles Munch program on Cascavelle with André Jolivet’s Trois Complaintes du Soldat sung by Pierre Bernac under Munch in 1943-44, and there too, compared to Dante’s edition (see reference above), the Cascavelle sonics have more clarity and definition. So it is a choice really between the marginally better sonics of Cascavelle and the more muffled ones of Dante in La Danse des Morts, and between the excerpts of King David (in congested sonics that make the chorus all-but incomprehensible) and Jolivet’s Trois Complaintes du Soldat, an endearing cycle written on texts of the composer himself, after the defeat of France to Germany and the collapse of the French army, and a return of the Varèse-trained and Bartok-admiring modernist composer to a more accessible style, harking back to the vocal music of Ravel and Honegger.

Ultimately, for the Honegger collector who’d want those recordings, I find Cascavelle a better choice than Dante. For detailed interpretive comments about both Danse des Morts and the Symphony, including comparisons with Munch’s other versions and those of Ansermet and Karajan, see my review of the Cascavelle edition. Dante has informative liner notes by Philippe Morin, TT 61 minutes, text of La Danse des Morts not provided and even less English translation, which will be a further impediment for English-speaking audiences (but they aren’t either in the Cascavelle reissue).