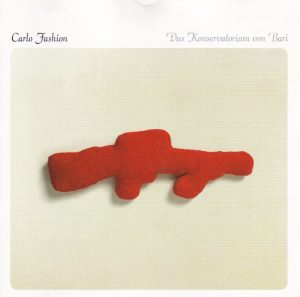 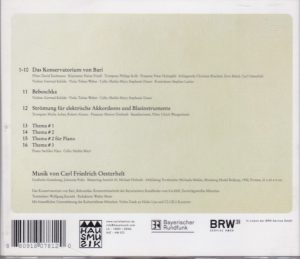 Das Konservatorium von Bari and Beboschka recorded by the Bavarian Radio at the Zerwirkgewölbe in Munich, 8 April 2004 (Wikipedia German indicates that it is the second oldest building in Munich, dating from the end of the 13th century). Recording information of the other pieces not provided

What IS this? No liner notes whatsoever (not in my copy), just a laminated paper cover opening on blank, so only the title to go by, “Carlo Fashion Das Konservatorium von Bari” and you don’t even know for sure what’s the disc title (“Das Konservatorium von Bari” ?) and what’s the composer’s name (“Carlo Fashion”???). There’s even no listing on Apple’s Gracenote. Okay, so turn to back cover, composer is a Carl Friedrich Oesterhelt – you don’t know if he’s German, Swiss or Austrian -, and “Konservatorium von Bari” is one of the pieces played on the CD (tracks 1-10), scored for flute, clarinet, trumpet, trombone, percussion, violin, viola, cello, double bass. The other works are Beboschka for violin, viola and two cellos, Strömung (“electrical current”) for electrical accordions and wind instruments, but no accordeonist is credited and I hear none on the track, and Thema #1-4 for piano and cello.

The CD showed up on eBay among many offers from a seller I regularly buy from, I listened to the 30” excerpts on Amazon and was intrigued enough to buy it.

Turns out the music is inspired by all sorts of popular music styles, but with the raw disjointedness typical of a certain style of contemporary music. In Konservatorium von Bari (titled unexplained), there’s circus music, blaring trombone (tracks 1 & 2), out-of-joint Tango (track 3), Tango mixed with Balinese music (track 6), pounding drums as in Tambours du Bronx or Stomp (track 4). There are moments of wild cacophony verging on free-to-even-freer jazz (track 9), but also moments that are very consonant and melodious. Kagel’s ironic and circus-like style comes to mind (as in Marches to Botch Victory), as well as the music of Austrian Heinz Karl Gruber, or the Klezmer-Serbian pop band “No Smoking Orchestra” of film-maker Emir Kusturica, or again, at times, the kind of Classical-meets-central-Europe-pop style that the Balanescu Quartet has been known for.

Beboschka and Thema sound more like music Michael Nyman or Gavin Bryars could have composed, not so much because repetitive (although Beboschka is, at one point) as tonal, consonant, going from dynamic to nostalgic and dreamy, on the verge of the sentimental-corny in Thema (as the music of Nyman and Bryars can be, and not their best), but ultimately quite affecting I find.

In Strömung, then, supposedly for “electric accordions and woodwinds”, I neither see credited nor hear an accordion(ist), but let’s not allow ourselves to get fazed by such considerations. I guess Oesterhelt has something “conceptual” or “post-modernist” in mind like “this is not a pipe” . Besides slow-moving or dance-like neo-renaissance Fanfares that might at times, very vaguely, evoke a Monterverdi’s opening Toccata of Orfeo drowning with the Titanic, the drone-like use of the woodwinds is probably meant to imitate the accordion. And suddenly, it ends. There’s, if I may, atmosphere in the piece (and not just in the accordion’s bellows).

OK, so before I check online, my guess, he’s Austrian and a student of Gruber. Now, check: no entry for Oesterhelt even on German Wikipedia. No website that I could find, no bio, but recent mentions online here and there, concerts, productions, recordings. Here’s the most I could find about him, re his album “The Anatomy of Melancholy” (on http://www.diskob.com/)

““The Anatomy of Melancholy” is the second co-operation of the German multi-instrumentalist and composer Carl Oesterhelt, and jazz-saxophonist Johannes Enders. Oesterhelt – drummer with the band F.S.K. – has been making appearances as theatre-musician at the Münchner Kammerspiele, the Thalia Theater Hamburg, and the Schauspiel Köln, as well as festivals like the Ruhrtriennale, or the Festwochen Wien. His composition in between classical music, new music”

But a little more shows up if you Google-search “Carlofashion” – not “Carlo Fashion”, mind you, because that yields hundreds of references to the “Monte-Carlo fashion week”… No, unlike Oesterhelt, “Carlofashion” even has a website, http://www.carlofashion.de/. Still no bio (but Google, recognising that Carlofashion and Osterhelt are the same person, yields that Oesterhelt was born in 1968 in Munich), but a discography, so I’m left to suppose that as a composer, Oesterhelt has invented this “Carlo Fashion” as an alias of himself.

I don’t know that I’ll be actively seeking more CDs of Oesterhelt or Carlo Fashion, but I’ve found this one fun to listen. TT 74 minutes.