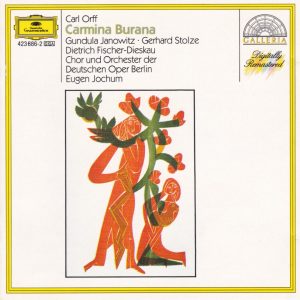 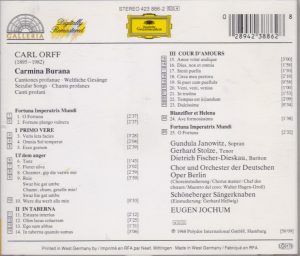 Recorded October 1967 in the UFA-Tonstudio, Berlin 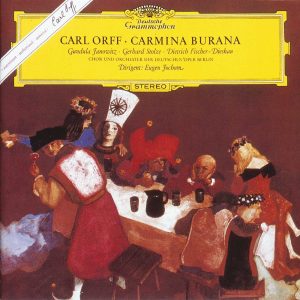 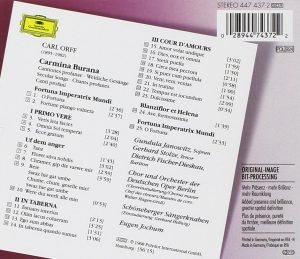 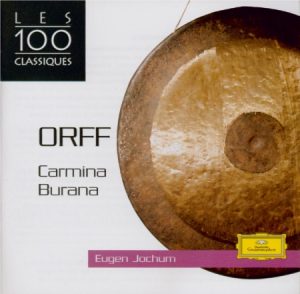 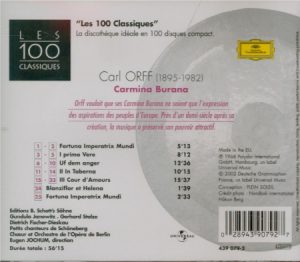 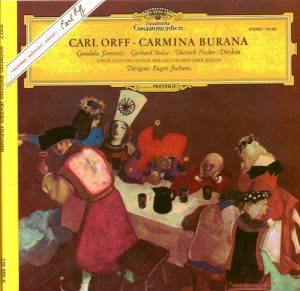 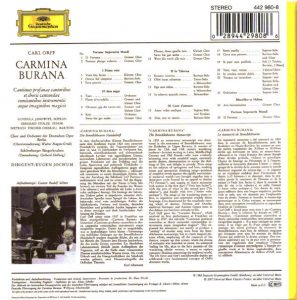 …and many other editions documented on Discogs.com (link will open a new tab)

This version was recorded in 1967 and has been considered ever since as the benchmark version – and rightly so. The 1967 sound holds up very well, with only slight traces of congestion in the louder climaxes. It has been recently reissued on DG’s “Originals” (reproducing the cover art of the original LP), with, they say, “mehr Präsenz, mehr Brillianz, mehr Raumklang”, but the sound of the first CD reissue from 1988 on the budget collection “Galleria”, which is the edition I have, was already very good. Choral and orchestral work is superb, with a suitably child-like children’s chorus in “Amor volat undique” (track 15). Certainly there are spots in which other versions may have an edge, slightly more bite here or clarity there or tonal perfection elsewhere, but overall Jochum and his forces are simply great in their characterization and details. But where his version is really incomparable is in the area of soloists. The tenor is attributed by Orff only one great number – “Olim lacus colueram”, track 12 – and Gerhard Stolze acquits himself of the unique vocal demands – including singing in falsetto to convey the wracking tortured suffered by the swan roasting on the spit – with great characterization.

I am usually no great fan of Fischer-Dieskau – I find that he too often tries to compensate a light baritonal timbre by an over-acting which all too often lapses into fussing – but here his clarity of timbre and masterful theatrics are incomparable. But above all it is Gundula Janowitz’ unique blend of angelic purity and steel power of delivery that I find unmatchable, making this recording one for the ages.

The liner notes contain no presentation of the work but offer something more valuable still and often lamentably absent from other releases: the complete text with translations in German, French and English.