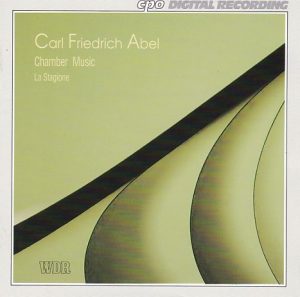 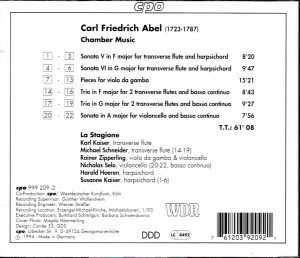 For the 15 minutes of solo gamba and the Bach-evocations of the Trio for Two flutes
Originally posted on Amazon.com, 14 December 2015

Carl-Friedrich Abel’s dates, 1723-1787, make him roughly a contemporary of the Bach sons (Wilhelm Friedemann 1710 – 1784, Carl-Philip 1714 – 1788), of Gluck (1714 – 1787), Leopold Mozart (1719 – 1787) and Haydn (1732 – 1809), and he was also a close partner in London of Johann-Christian, Johann Sebastian’s 11th son (1735 – 1782). I’ve enjoyed Abel’s orchestral music (see my reviews of Abel’ Ouvertures & Sinfonias and Symphonies, Op. 10, Nos. 1-6), but boy is his chamber music for flute boring! Music for the aristocratic salon, galant, pretty, elegant, good- and mild-mannered, music for the ladies (of the era) at tea-time. The concluding Sonata for cello and continuo is of the same ilk. Fortunately the Trio for two transverse flutes and continuo (tracks 14-16) rises a little above that, and the dialoguing of the two flutes nicely brings the Bach cantatas to mind (and it is no surprise that Abel was a pupil of the Leipzig cantor). Though mostly austere, meditative and brooding – and precisely for that reason –, the pieces for solo gamba, tracks 7 to 13, offer more nourishment. That Abel was a master gambist may account for it, but also the fact that the solo gamba probably doesn’t lend itself to the same kind of fluffiness as the flute. There’s only 15 minutes of them, but that’s the main reason to buy this CD. Track 12 in particular, titled “Arpeggio”, is as magnificent as anything in the Bach Suites. Michael Schneider and his ensemble La Stagione have done great service in reviving the music of Abel, but their recording of the Symphonies op. 10 offer a better introduction to the composer. TT 61:08.