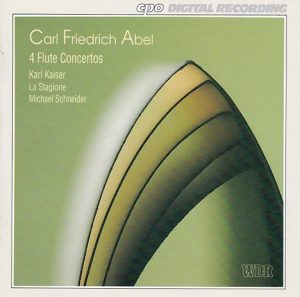 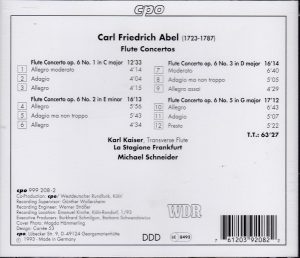 Not as uplifiting as Vivaldi’s, but, I find, more emotional depth than Mozart’s
Originally posted on Amazon.com 14 December 2015

No cause for worry, as it turns out. There is a playfulness to the opening Allegros, a muscularity and boisterousness to the concluding ones, sometimes even true drama to either, a wistful elegance to the slow movements, a suberb funeral-mourning mood in the Adagio of op. 6-5 (track 11), imaginative and whimsical cadenzas. Stylistically, the concertos straddle a kind of middle ground between Vivaldi and Mozart. The liner notes compare them to the Flute Concertos of the Mannheim school and especially those of Franz-Xaver Richter, and though I am not familiar with them, this rings true, at least chronologically. They are not as uplifting as Vivaldi’s works, but, I find, have more emotional depth than those of Mozart. TT 63:27.