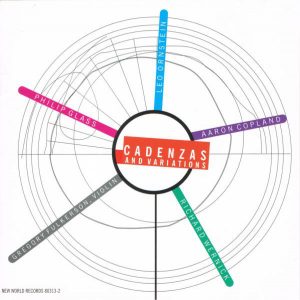 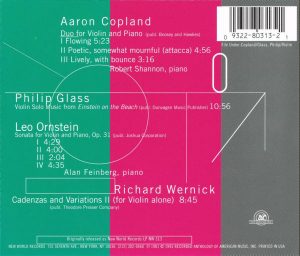 Other than a text copyright date of 1981, the notes give no information as to when the recording of these pieces took place. Anyway this disc was first published on LP, New World NW 313, in the early 1980s (it makes its appearance in Schwann catalog somewhere in 1982 – see its entry on Discogs.com, link will open a new tab). This is the 1995 CD reissue and with 49 minutes the timing is detrimentally short by CD standards. But it presents interesting material that, for some of the pieces, can hardly be found elsewhere.

Not so with Copland‘s Duo for Violin & Piano. A late work, it originated in 1971 as a Duo for Flute and Piano and was arranged by the composer in the present form in 1979. It is a highly accessible work, couched in Copland’s most pastoral and “prairie” style. I am one to regret that Copland abandoned his earlier, more demanding (but, I find, rewarding) style of the ’30s, to (by his own admission, though he would not use this admittedly somewhat disparaging expression) pander to the wider American public’s tastes.

I bought this disc for Ornstein‘s Violin & Piano Sonata, of which it is still today the only recording. Born in Russia in around 1893 (the exact date is unknown), Ornstein studied at the Saint Petersburg Conservatory but moved to the United States in 1907 to escape antisemitism. From about 1910 he developed into one of the most original and daring “maverick ultramodernists”, so typical of the US scene in those times (Ives, Cowell, Rudyard and Antheil are other representatives) – a movement that would be later stifled by the depression and lack of public understanding, as efficiently as Stalinist Academism stifled the early modernist trend in Soviet Union. By the mid-1920s he retired from concretizing and disappeared from the public eye – and memory. Incredibly, he lived until 2002 and was still composing in the age of Boulez, Xenakis, Stockhausen and the likes (but in a, by then, rather backward-looking, impressionistic language).

The Sonata dates from 1913 and is a tough nut to crack, much less easily appealing than Ornstein’s masterpieces for solo piano of the period (see Marc-André Hamelin’s all-Ornstein CD from 2002 on Hyperion CDA 67320, barcode 034571173207, or Ornstein’s masterpiece “A la chinoise” by Marthanne Verbit on Albany or Alan Feinberg on Argo). It is couched in an atonal and thorny language reminiscent of Berg and Schoenberg at their starkest (Schoenberg’s Fantasy for violin and piano and Violin Concerto and the tensest passages of Berg’s – all compositions from the late 30s and 40s), with much tension and hardly a moment of repose, while the piano part bears Ornstein’s trademarks – thick chordal writing with many clusters – except for the daredevil seductiveness. It reminded me of Ives’ at HIS thickest and most unseductive. Ornstein admitted to that much, aknowledging that with this piece he had “brought music just to the very edge”, beyond which “lies complete chaos”. Of course, the 1950s and 60s went way beyond – and some would argue: in complete, albeit highly organized, chaos, but that is another story. Incredibly, many Ornstein scores are available for free download on the amazing website maintained by his son, Severo. Fulkerson and Feinberg play with remarkable precision and the violinist realizes the remarkable feat of maintaining fine tone throughout Ornstein’s thorny textures.

It was a good idea to have excerpted the 11-minute violin solo part from the 1975 Phil Glass-Bob Wilson “Einstein on the Beach” collaboration. It would be overstating its value to say that it is a modern, repetitive version of Bach’s Violin Sonatas, but, with the folkmusic-like tune that it develops and repeats, it is effective, seductive and appealing in its own right – and easy to listen. It sounds as a harbinger of the World-music that ensembles such as the Kronos or Balanescu Quartets would publicize in the 80s and 90s.

Richard Wernick‘s 9-minute Cadenzas and Variations II for Violin alone is a much sterner piece, composed in 1970. I would describe its language as post-Bartok Solo Violin Sonata, but with some coloristic effects produced by playing techniques that do not belong the classical canon (try 3:39 for instance).

As always with New World records the liner notes are remarkably informative and include performer’s bios plus bibliography and discography on the composers – but, other than one bibliographic reference for Wernick, these appear not to have been updated since first publication, so what you get is an LP discography. Fortunately Ornstein’s discography in particular has been beefed up since 1981 – though not nearly as much as this essential composer deserves.