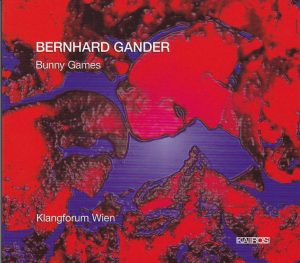 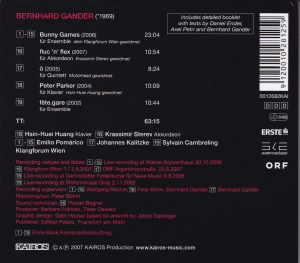 Another serving of Madonna, Hannibal? Thigh or breast? And a bit of music to entertain and help digestion?
8 September 2016

The music of Bernhard Gander (born in 1969, Austrian, a composition student of Beat Fürrer) is rowdy, wild and cacophonous, a mixture of contemporary, avant-garde jazz improvisation and plain instrumental eructation, something like Hannibal Lecter feeding. At one point in Bunny Games, Hannibal lets himself be entertained by a music box playing a Scarlatti Sonata at the harpsichord (track 3). Track 12 is a homage to Varèse, with quotations from Amériques (what a fantastic piece, sounding as advanced today as it must have in 1922…), and I wonder if track 13 isn’t a tribute to to Ionisations, Varèse’s piece for percussion. All kinds of instrumental techniques are used, all to produce outlandish, rowdy and cacophonous sounds. I think most listeners will hate it. I find its “let-your-hair-down-and-don’t-bar-any-punches” attitude very entertaining (and I always like a good din anyway, like banging berserk on the tin lid of a trash can).

Turning to the solo and chamber pieces, “ö”, labelled “quintet”, is in fact scored for the rare lineup of accordion, bass flute, bass clarinet, viola and cello, and it sounds like no other quintet you’ve ever heard, and not only by dint of its unusual instrumentation. Fluc ‘n ‘flex is for accordion solo. The accordion is an instrument that can produce a wonderful array of novel and intriguing sounds in contemporary music, and Gander uses that ability to the hilt. The liner notes don’t mention anything about re-recording, but there is a wide stereo spread that makes it sound like two accordions. “Peter Parker”, the piece for solo piano, was inspired, says the composer, by the Stan Lee comics and the film (which one from the franchise is not said) and is the composer’s attempt to produce the equivalent in sound of the physical action in the movie. But it sounds to me more like the Katzenjammer kids on cocaine.

The liner notes include quotes from the composer’s commentaries on his works, and they are pretty inept. Other than the irksome fad of putting no caps at the beginning of the sentences, they look like Gander is trying to pass off for a rock musician under cocaine – and from what he writes of his life and taste for early-morning night-clubbing, I wouldn’t exclude that latter conjecture.  And maybe Gander took ssome again when he went to see Spiderman at the movies, that would explain his “Peter Parker” piece. There are also more “serious” liner notes, where we are told that Bunny Games deals “with the theme of seduction” (oh yeah???) and, other than Scarlatti and Varèse indeed, contain references to Madonna’s “Nothing Really Matters and Hangup”. Greater specialists of Madonna than I am may recognize them – but then, I recognized the references to Scarlatti and Varèse before I had read the liner notes. I wonder if Hannibal would have a taste for Madonna.

Funny, in my “contemporary music from the German-speaking area” file (which includes Austrian, the right and upper part of Switzerland, and, who knows, some parts of Argentina), Gander comes just before Gehlhaar, and there are many stylistic similarities, Gehlhaar also writing music that is pretty wild. But, ah, just a coincidence. In fact it is by mistake that I kept Gehlhaar in that file: although born in Breslau, Germany (now Wroclaw, Poland) in 1943, his family immigrated to the US when he was ten and Rolf became an American citizen at fifteen.

TT 64 minutes. This is for the adventurous fans of Madonna and Hannibal, preferably on cocaine.