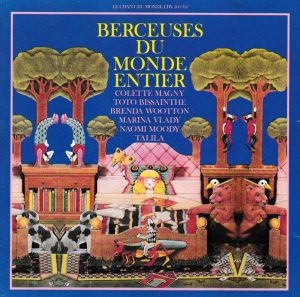 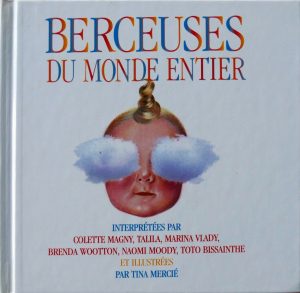 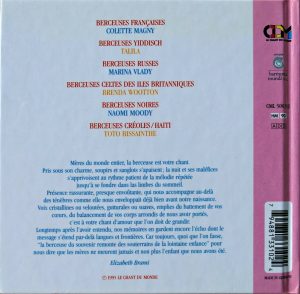 Endless ramifications to the simplest things, when you start digging
13 June 2020

You’d think reviewing stuff like that would be a quick ‘n easy thing. But there are so many ramifications to even the simplest things, when you start digging….

It’s NOT that this is the kind of stuff I usually buy. I was working on a discography of the label Chant du Monde (work in progress… ) and I happened on it, or rather its original CD edition, LDX 200312 (1990), barcode 3149025045874. A friend of mine just had a baby, so I thought it would make a nice gift, and I ordered it. Big disappointment when I received it, CD very dirty, defective in a number of tracks, and anyway disappointing for its very sparse presentation, just a list of tracks with artists’ credits, no liner notes, no illustrations. NOT suitable for a gift. Seller refunded.

But, compiling my discography, I had seen that there had been a later edition, apparently more suitable for children, CML 500312 (1995) barcode 794881331024, so I ordered it.  And that one is fine, coming indeed with a 32-page booklet including texts of songs (in French, and French/original language for the Russian, Yiddish, British and “Black” lullabies), nice illustrations, composer credits when due. If its for a gift to a child or parents, choose that edition… with the following proviso:

In fact, receiving my order, it turns out there were TWO different reissues of the 1990 CD LDX 200312, but, to confuse matters, both bearing the same barcode. The later reissue (which is the one I was sent) is from 2004, label number 500312 (no “CML” prefix). And they ARE, indeed, two different editions. An eBay seller obligingly published his offer of the 1995 CML 500312 with many photos: illustrator and illustrations are not the same! Tina Mercié in the 1995 edition, Lea Weber in the 2004 reissue (with the cover illustration credited as “after the original illustration of Tina Mercié”).

The problem with both these different editions bearing the same barcode is that, if you order on Amazon, you won’t know which edition you are buying, unless you can communicate before purchase with the seller. Anyway, I find both editions very nice.

And, wait, it’s not all. As I was compiling my discography, I was able to retrace the origins of that CD. They come from a series of 7″ 45rpm records published in the early 1980s, and it’s nice to have compiled them together on a single CD and made them available again.

As documented on serial-records, that series of issues or reissues bearing label numbers 100 401 and upwards seemed to have been magnificent objects, with pop-up scenes when you opened the gatefold cover. Here are photos for Talila’s Yiddish lullabies: 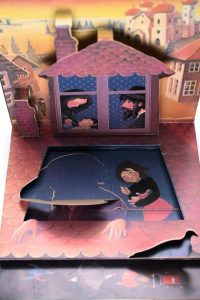 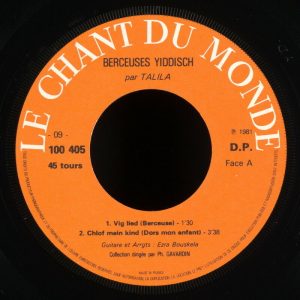 In the series there is a 100 403, but it is a recording (of French Lullabies, by Françoise Moreau) that was not included in the CD reissue, see Discogs.com. I haven’t found trace of releases above 100 406, and no trace of the Colette Magny or Toto Bissainthe recordings in the same series. Likewise, logically, there should have been a 100 135 in the other series of Berceuses, that might have been for Talila’s Yiddish Lullabies, since I’m missing a release for her in that series. Well, Chant du Monde issued a 100 135 indeed, but it was for something else altogether, “Le Grand Magic Circus sings The Story of the Pig that wanted to get slim”, documented on Encyclopédisque. Chant du Monde 100 130 is also for something else, a Steven Waring 7″ 45rmp, see Discogs.com, and likewise with 100 137, Renaud Gagneux “Musiques sur la place”, also documented on Discogs.com. Since Naomi Moody’s Berceuses came on Chant du Monde 100114, I also looked at the adjacent label numbers, hoping to find another edition of Talila, but they are for something else, all documented on Discogs, 100112 here, 100113 here,  100115 to 100120 for records of Françoise Moreau and François Imbert. Bottom line of this discographic research: I’m missing a pop-up edition for Colette Magny and Toto Bissainthe (that I don’t know ever existed) and a non pop-up edition of Talila (that may likewise never have existed).

At the time, the recordings of Magny, Moody, Vlady and Wootton were reissued on a Chant du Monde LP, LDX 100312, documented here.

Now, other than those discographic minutiae, a comment is in order about content. It is, in fact, a great disc of lullabies, very original. Some of this is far, far away from your sentimental, saccharine and cloying lullaby. The voice of Colette Magny, which opens the CD, hits you like a bludgeon – a man’s voice, the voice of a serial killer, frightening. And she’s not singing “go to sleep, sweet baby” either.  These are lullabies to send baby crying rather than asleep, or asleep because being awake is too damn scary! Lullabies for impatient mothers, “Sleep or the Boogeyman will come and get you”…. Marina Vlady is best remembered as a French actress, and she was born in France indeed, but of  Russian emigres. Her Russian Lullabies are imbued with a very Russian indeed nostalgia, and likewise with the Yiddish lullabies sung by Talila, and the folk-song like lullabies of the British Isles sung by Brenda Wootton, the latter which resemble most the expected, soothing lullaby. Vlady appears to sing her fourth lullaby, “Petite berceuse”, in multi-overdubbing of herself, and the result is beautiful. Same with Brenda Wootton in track 15 “Lul ha lay”. I can’t pronounce on Vlady’s Russian accent, but it sounds very vernacular to me. Naomi Moody sings in Gospel/Blues style. The arrangements are simple but effective, violin and piano accompaniment, piano, guitar, harp, accordion, bells or a capella (in Magny’s striking “Le Grand Lustukru”, Wootton’s “O can ye sew cusions”, track 18, or Moody’s “Little boy”, track 22). They are more elaborate, in “world-music” style, in Toto Bissainthe’s songs. One regret is that the CD leaves out one song from the original vinyl of Talila, one out of Naomi Moody and two out of Toto Bissainthe. With a TT of 55, there would have been plenty of space to include them.

Still, anybody looking for a CD of lullabies may want to try this one.