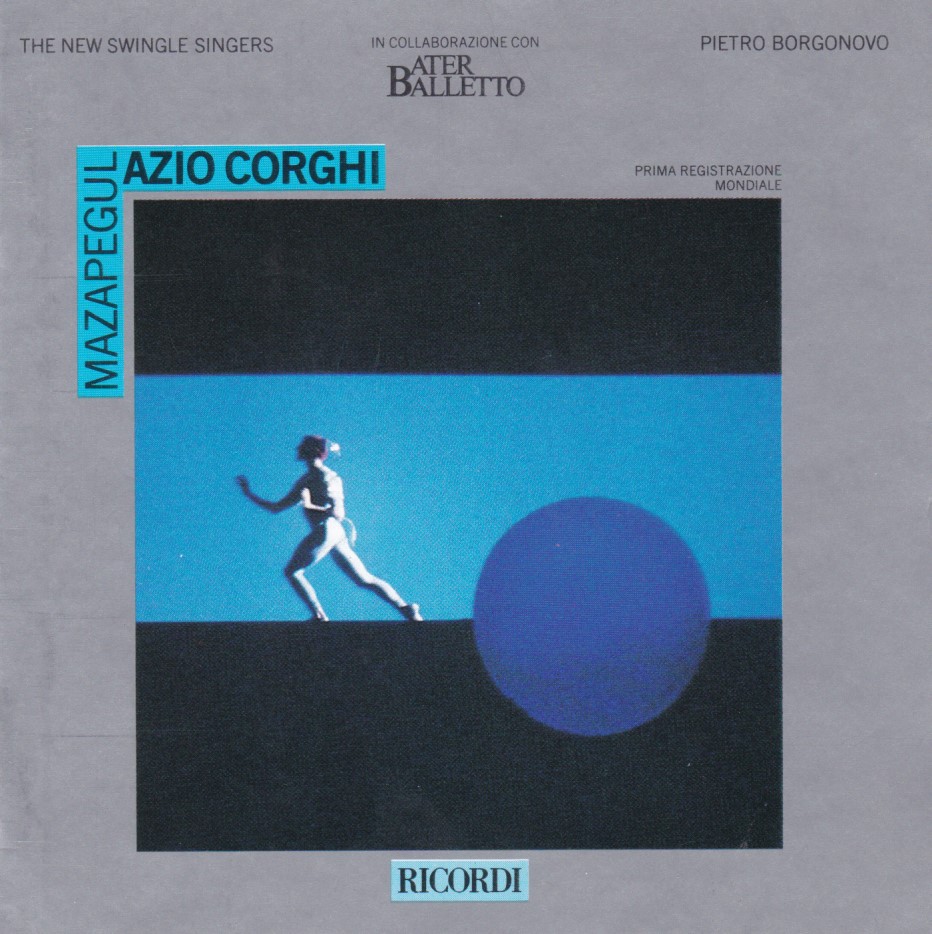 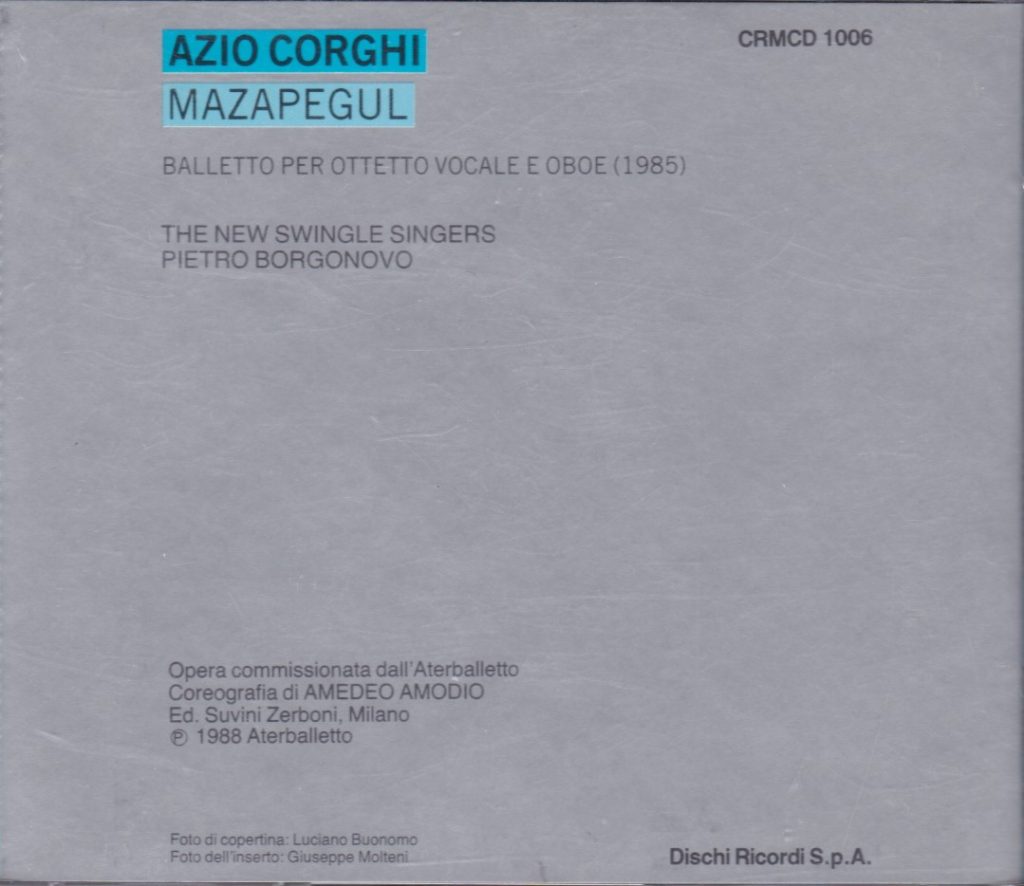 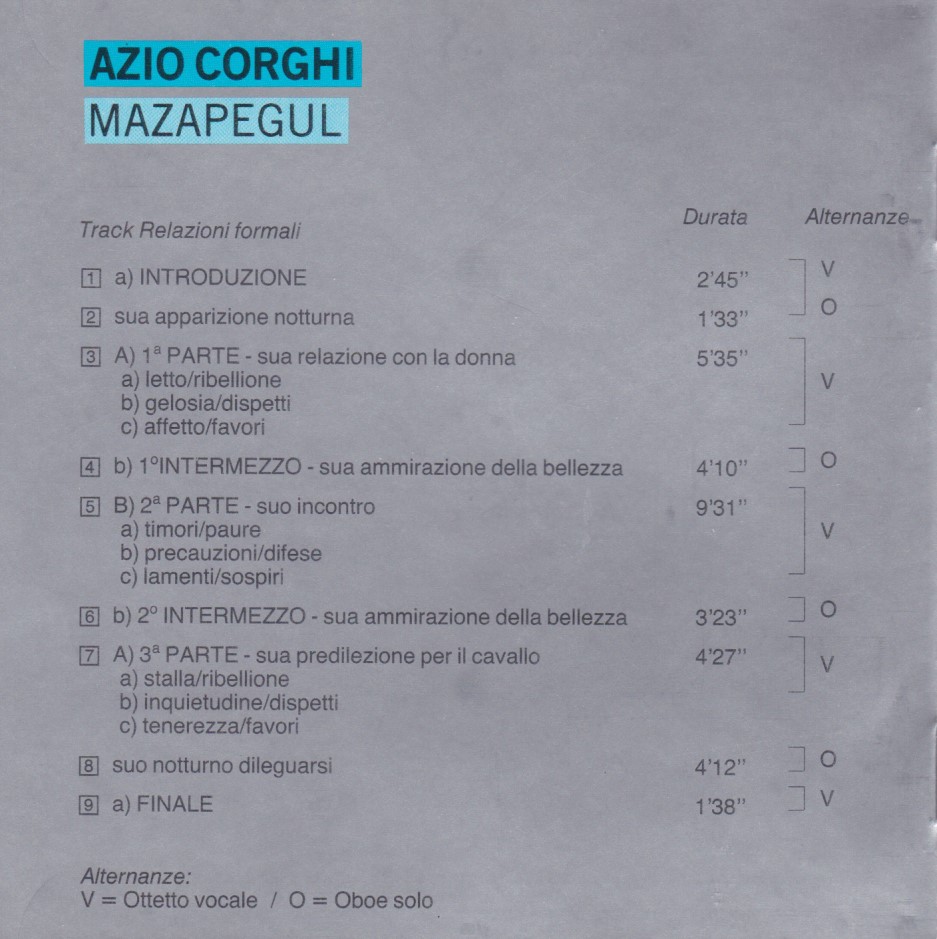 In the wake of Berio’s A-Ronne
Originally posted on Amazon.com, 19 June 2011

Azio Corghi is an Italian composer born in 1937, the author of 11 operas and ballets, and is now a teacher of composition at the Accademia di Santa Cecilia in Rome. Mazapegul, a ballet completed in 1985, was his second stage work. “Ballet for vocal octet and oboe”, the subtitle translates. The vocal octet is the New Swingle Singers, as they were called then (they reverted back to the original name of Swingle Singers in recent years). The CD was published in 1988, although, according to Swingle Singers’ discographer Thomas Cunniffe (who appears to have the information from one of the singers involved in the recording), it was recorded a few years before.

The liner notes are not entirely clear about the content of the ballet, and the fact that no translation of the libretto is provided (however commendable it was to print said libretto) doesn’t help. The words are “taken from the texts of songs, nursery rhymes and riddles referring to the story of Mazapegul in the various dialects of Emilia Romagna” say the liner notes, and they further refer to “the overwhelming passion of the impish spirit of Mazapegul, which awakens love in every living being – woman, man or animal” and to “the red-hooded imp, symbol of that pure love which rejects all conventions and which binds man to nature thanks to the spontaneity of its erotic and emotional impulses and needs” – which I take is the Emila Romagna folk version of the Gods Pan or Dionysus. Type Mazepegul on Wikipedia and you come up with an entry on “Aterbaletto productions” (link will open new tab), Aterbaletto being the Italian modern dance company founded in 1977 by Vittorio Biagi and based in the north eastern Italian city of Reggio Emilia, which premiered the ballet. Go to Wikipedia Italy (and try and muster your old memories of Italian, with the help of an online dictionary) and it shows that Mazapégul is the elf or goblin from the mythology of the Italian region of Romagna, (and now back to Wikipedia English) an Italian historical region that approximately corresponds to the south-eastern portion of present-day Emilia-Romagna, which includes the cities of Ravenna, Imola and Rimini.

The ballet is divided into three parts, performed by a cappella vocal octet, framed by an introduction and a finale (played symmetrically by vocal octet then oboe, and the reverse) and divided by two Intermezzos played by solo oboe. So the “and” from the subtiltle “Ballet for vocal octet and oboe” is not to be construed as in “sonata for violin and piano”: they alternate but never play together (and the slightly different sonic perspective indicates that they weren’t recorded together either). I wonder why Satie or Florent Schmitt, who had such a wonderful sense of humor in their titles, never thought of writing a Sonata for violin and piano in which the first movement would have been for solo violin and the second movement for solo piano. Just consider that the finale could be played as the combination of both first movements, and it is not so easy to bring off. Maybe that’s why they didn’t write it (but didn’t Milhaud do just that in his 14th and 15th String Quartets, whose combination can be played as an Octet?).

The libretto doesn’t depict an opera-like plot as such, but presents itself rather as something of an ethnological description of the behaviors of the Mazepegul, introduced by titles such as “His Nocturnal Apparitions”, “His Relations to Women”, “His Admiration of Beauty”, “His Predilection for Horses”. As mentioned, the sung texts are collated from “songs, nursery rhymes and riddles”, always short, sometimes non-sensical, many having to do with love and love-making. Curiously long descriptive texts about the Mazapegul are also provided for the passages for oboe solo – much too long really for their descriptions to be choreographically enacted in the limited time of the corresponding oboe piece.

“The musical material derives from the popular melodies of Emilia Romagna” say the liner notes, but that is distinctly heard only occasionally, as on track 5 at 5:32 or again at 8:42 where the mezzo sings her line in a “raucous” vocal technique obviously inspired by the typical Italian (or Corsican) female folk-singers. Otherwise, stylistically, Corghi here sounds like a follower of the Berio from A-Ronne (another composition written for and performed by the Swingle Singers on Decca / London Entreprise 425 620-2 (1990, original publication 1976). The voices make a large use of onomatopeia and phonema in a manner very typical of Berio, Ligeti and the contemporary music of those years (or rather, of a decade earlier), and the melodic lines are always very close to speech and declamation. The oboe sounds something like a Berio sequenza: impish certaintly, but not very melodic, and with some intently “dirty” sounds – but it’s never as rough as a Berio Sequenza for oboe would have been.

Those who approach this disc for Azio Gorghi or Italian contemporary music should by all means go for it, despite the short TT of 37:16. Those who come here attracted by the Swingle Singers should approach with caution, however. This is contemporary music, not anything near the Swingle Singers’ vocalization and jazzyfication of the hits of classical music or of the pop, rock and jazz standards.